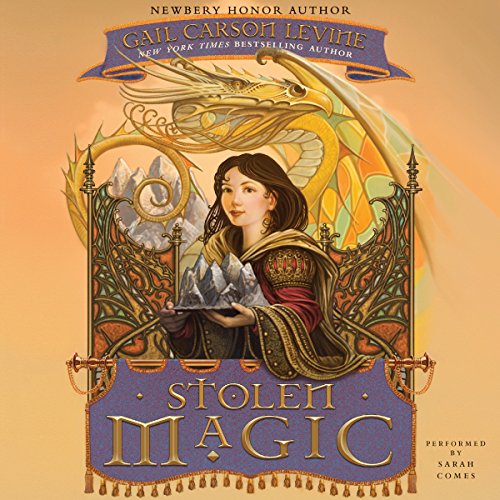 The Newbery Honor author of Ella Enchanted, Gail Carson Levine, weaves a thrilling tale of mystery in this companion to A Tale of Two Castles.

Elodie, the dragon detective Meenore, and the kindly ogre Count Jonty Um are all on their way to Elodie's home island of Lahnt. Elodie has barely set foot on land before she learns that the Replica, a statue that keeps her island's deadly volcano from erupting, has been stolen! If the Replica isn't found in three days, a mountain will be destroyed. And when Elodie ends up alone with a cast of characters, each of whom may be guilty, she has to use her wits to try to unravel a tangled web of lies.

New York Times best-selling author Gail Carson Levine has written an imaginative, fast-paced mystery that will be enjoyed by fans of A Tale of Two Castles as well as those meeting Elodie, Meenore, and Count Jonty Um for the first time.

What listeners say about Stolen Magic

Nearly as good as Tale of Two Castles

We enjoyed the puzzle and the atmosphere of the Owais

Elodie - She is clever and brave

What does Sarah Comes bring to the story that you wouldn’t experience if you had only read the book?

Sarah Comes' voices are instantly recognisable and wonderfully characterful. She has more to do) than in Tale of Two Castles but adds a beautifully soft Irish accent for the new beings, the Brunkles, and scottish (both a gruff older man and young boy) as well as managing Elodie mansioning other characters.

Unlike A Tale of Two Castles, this story was not told from the perspective of Elodie which I really enjoyed as it allowed me to follow the stories of Masteress Meenore and Count Jonty Um as they separated during their journey. I liked Sarah Coomes’ performance better in this listen than in A Tale of Two Castles and found Meenore’s laugh to be less annoying this time around. The story was a little hard to follow with so many names and new types of magical characters with different powers so it required a little more attention than usual. All in all, it was a fun listen and I felt like I was partaking in the “inducing, deducing, and common sense” Elodie and Meenore used to solve the mystery. Highly recommend!