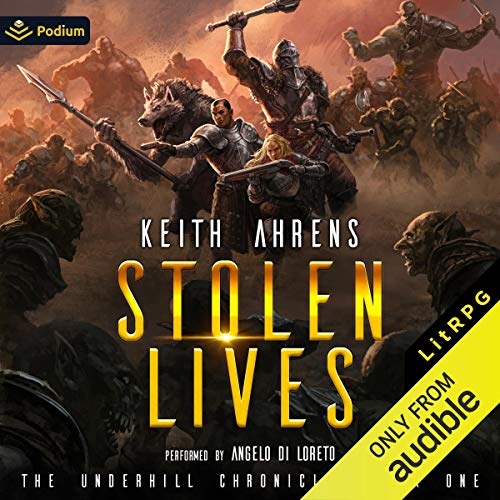 By: Keith Ahrens
Narrated by: Angelo Di Loreto
Try for £0.00

Trapped in another world. All stats against them. It’s fight or die.

When Caleb reported for his normal shift, he never expected to go from the front seat of his ambulance to a bloody battlefield in a medieval Fey Realm. Kidnapped and beaten unconscious, he wakes up with a concussion and a fresh tattoo. While this might not be totally unusual for him, having the tattoo project the image of his stats and equipment like an old school tabletop RPG kind of is.

He finds himself thrown into a cell with three strangers who’ve also been abducted. Even worse, they’re all from different time periods, and due to the disjointed flow of time between the real world and this realm, hardly able to understand each other. They’ll have to learn to work together.

Months of training will lead to a yearly battle they were kidnapped to fight in. It’s law.But Caleb has other plans. Outnumbered and under-armed, but lured in by freedom, he can either stay and fight in the games, or try to lead the escape to the only gate back to their world. Either way, it’s live or die.

What listeners say about Stolen Lives

The narrator's delivery felt at times like listening to the narration to a film noir which was enjoyable. The story has an interesting concept, reminds me of the hunger games or the like. look forward to the next chapter.

I received a free copy of this audiobook.

I enjoyed this LitRPG book. The main character, Caleb, is a first responder/paramedic. He is pulled into another world to be a slave, forced to train and fight in an arena. He and his friends attempt to escape from this evil realm. His experience is invaluable in forging friendships and keeping his friends alive.

It's obvious the author has medical experience. The descriptions of combat and injuries are detailed but not overly detailed so as to bog down the book. This adds to the realism of the book. Whereas many books, video games, RPG's, and movies have main characters survive terrible injuries with mere handwaving and little if any treatment, the injuries matter in this book, as they would in real life, and necessarily affect the story. That is what makes this book different from other LitRPG's and is why you should read it - it really feels like this is closer to what could happen if you found yourself sucked into a fantasy realm. The narrator did a great job.

I enjoyed this book, but it had some serious and noticeable issues. take the last part of the book, why not jump into the portal rather than away from it tell me that. The spell was ready so jump in and you are fine. The wolf didn't have to die. The other issue is the village why abandon those people, more hands make light work is a saying for a reason. The more fighters the easier they can win.
I also don't get why the MC refused to kill the guy in the initial battle then getting stabbed and having to end up killing the guy still. He just wasted the limited healing and weakened the part. The other issue is the woman who jumped into the cart car with them, but wasn't a part of the team. The minute she refuses to help why not kill her because it ended up that she tortured one their own people because of it.
I know I pointed out some issues but I liked it so let's see what happens next. It better gets better or it's the axe.

I could not stay awake/interested

As the headline states, I had bouts of nodding off and multiple rewinds to try and restart my attention. After 9 + hrs of listening to the book I gave up. There's multiple series I'm following no need to torture myself. Especially with the wonderful return policy at audible. Lots of positive reviews so I am wondering if I am the odd review.


Just finished listening to this book on Audible. My typical reading material consists of comic books, Star Wars novels, zombie books and parts catalogs for work but a friend recommended Stolen Lives all I have to say is AWESOME! I haven’t played D&D in over 25yrs but immediately felt very nostalgic and completely at home in this brutally violent setting. The characters are all super relatable and really make you want to root for the good ones while wishing horrific endings on the evil. Lol. I’m excitedly looking forward to the 2nd book and hope to read more by this author.

Average guy kidnapped by the Fairy folk to be used a chess piece. Escape is the plan, allies are found, but that is only the beginning. I can wait till the next one in the series comes out!

Good story! But while it was filled with a lot of action and drama, the book was just too slow to progress. Nothing major caught my interest besides the ending and everything before that seemed to be a bit repetitive. The characters were decent but I was not at all empathetic with them. The author seemed to try to force the relationships between character way too fast for how little happened. It seemed like the main character would have a comrade in arms every time he met someone nice enough to fit. Anyways with all this it seems like the author is just trying his best to set up his world and characters with this book and it definitely has potential even if this book wasn’t the best.

Wow, Caleb our main protagonist is kidnapped and dragged to Underhill where he finds himself hurt, trapped and enslaved in an old-school like D&D game... where the only sure thing, is death!
It's a fight or "perma-die" situation, and the action is turned all the way up to 11, complete with brain matter spewing out the back of an unfortunate head or two!!! Caleb, has just one thing on his mind: to change the odds, and turn the tables on the Fae and escape! Something he can't do without the help of his pack mates!
And, yes! I loved it! I guess I saw to many Samurai movies in my formative years! LOL
The narrator Angelo De Loreto did his job admirably, and I was so wrapped up in the story I lost track of him as "the narrator". Ya gotta be doing real good to accomplish that! 😆
If I had any complaint, it would be about the abrupt ending (Not that it wasn't good, mind you)... I guess I'm just the type of reader that perfers the book to close with more of a denouement!

extremely well written, natural flow and brilliantly narated.
will be looking forward to the next chapters.

I loved a lot of the ideas in this book. I hope if hope we get more background into the fantasy world, especially the combat games, in the next one.