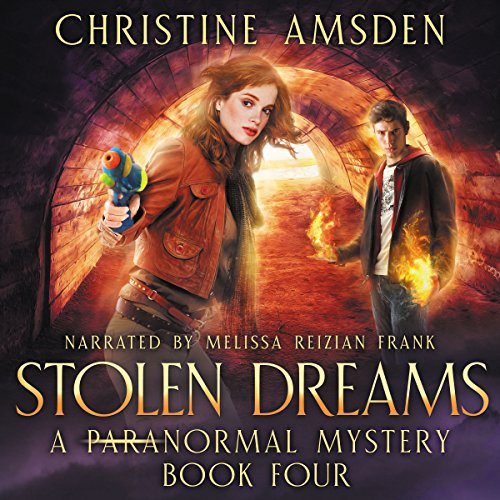 Edward Scot and Victor Blackwood have hated each other for nearly a quarter of a century, but now their simmering hatred is about to erupt.

When Cassie Scot returns home from her sojourn in Pennsylvania, she finds that her family has taken a hostage. Desperate to end the fighting before someone dies, Cassie seeks help from local seer Abigail Hastings, Evan Blackwood's grandmother. But Abigail has seen her own death, and when it comes at the hand of Cassie's father, Victor Blackwood kills Edward Scot.

But things may not be precisely as they appear.

Evan persuades Cassie to help him learn the truth, teaming them up once again in their darkest hour. New revelations about Evan and his family make it difficult for Cassie to cling to a shield of anger, but can Evan and Cassie stop a feud that has taken on a life of its own? Conclusion to the Cassie Scot series.

What listeners say about Stolen Dreams

Wow an explosive conclusion to Cassie's story, I loved it and am going to start listening to the spin off stories straight away. This is book four and I really recommend that you don't skip or start with this book as it continues from where the last book left off. I really like the characters and how magic or non magic effects them differently. This book be far contains the most action to date and I think the author is very talented in the way she describes the scenes or the emotion that run through this book, so much so that I had problems imagining it as it unfolded. Great book. The Scots and the Blackwood's feud is coming to a head and no one in town is safe with two very powerful magical family's fighting. Cassie has left the town she has called her home all her life and the Scots blame the Blackwoods They retaliate by kidnapping a Blackwood. As things spiral out of control in a game of tit for tat Cassie turns to a powerful Sear for guidance, one that just happens to be a Blackwood. But before the pair can get very far Abigal sees a future she doesn't like and sets in motion the only way she can see to ending the fight, her own death. With her dying breath she gets Cassie and Evan to promise they will talk but then as revenge Evan's father kills Cassie's father and all bets are off, dying wish or not. Can the two get past there differences and once and for all put an end to a feud that has been going on years? Or will more blood need to be shed first? I really like the narrator and hope she is the reader for the spin off books. She is great with all the different voices and puts in a lot of energy and emotion into the story.

Stolen Dreams is book 4 in the Cassie Palmer series. The book can be listened to on its own but IMO its best listen to the books in order so that you have the full history. Book 4 picks up where book 3 leaves off. War between the families is imminent and many are destined to to be harmed. Cassie’s family faces a major change as well as her friends. The story has love, mystery, and violence. The narrator did a great job with providing unique voices for each character and appropriate tone inflections for each scene. I received a free copy of this audiobook at my request and have voluntarily left this review.

This series just keeps getting better and better. There is no shortage of drama and suspense. The characters go through quite a lot of emotional upheaval as well and I felt for each of them when tragedy struck. I really like the direction this series is going in and I look forward to listening to the next book. I voluntarily reviewed a copy provided by the author.

A perfect way to end a series but I really hope there will be more with these great characters. So many answers were given and peace is once again found. Cassie finally finds her path to a happy ever after. Great book!

Another fantastic listen. What a brilliant conclusion to this series. I loved it and the characters and amazing storylines in this series. You need to start at the beginning to get the whole story. But it is a rollercoaster of a ride from start to finish, just couldn’t stop listening from start to finish. And the excellent narration is also spot on. I highly recommend this book. 😂😻😱

Finally the end of the series has arrived. I was really hoping all those pesky questions would get answered. Thankfully most are, some are kind of vague still.

A is typical with this series we jump into the middle of things. There are gaps in time between books that are told but not shown. Sometimes that makes you feel like you are playing catch-up with the story. Things are explained, it just takes a little time.

Everything is not happiness and light in this book. Things are coming to a head and there are casualties. A few really heartbreaking moments, have the tissues handy.

The romance is finally sorted out, I think you will like the end result. There also seems to be a hint of HEA for her friends Madison and Katelyn. It might be nice to have a follow-up novella to tie up those strings.

The story is mostly from Cassie's POV, but there are a few sections of Evan. It gives you a broader view of what is going on. I kind of wish we had more of Evan, it would have balanced things out a bit more.

There is a bit of cracked bedroom door. This means a few people get intimate, with a tiny bit of detail. It is barely worth noting, but I know some people do not like any mention of sex in a book. Up to this point there has been on smexy time in the series.

I listened to the audiobook narrated by Melissa Reizian Frank, who has been wonderful throughout the series. She had great voices and characterization a that were easy to identify. She drew you more into the story and had you by the heart at emotional moments! Her pace was perfect for all the action and energy of the story.

I am sad that it is over, but thrilled to see how it turned out. Really entertaining series that kept you guessing!

A Spectacular Ending to an Enjoyable Series!

If you could sum up Stolen Dreams in three words, what would they be?

I've enjoyed all the characters in this series - and it's hard to chose a favorite. But it would be crazy not to choose Cassie, since she's the star, so to speak, and since we mostly see the world through her perspective. I enjoy her dry wit and blunt honesty, although sometimes she makes me want to shake her and say, "Wake up, for goodness sake!" She's not as honest with herself as she is with others - so there's a bit of self-delusion and denial always going on in the background. Fortunately, this is all resolved in this last book of the series, with a very satisfying result. ;o)

I loved the scene where Cassie and Evan finally put aside their anger and talk to each other. The bedroom scene was very well done. And the part where Cassie refused the item Evan was offering her was sweet and heartwrenching. (I'm being purposefully obtuse because I don't want to spoil the story for others who might not have read it yet.)

Again, I can't say specifically which scene I mean, but it's where someone we all love and care about is reportedly killed. I was actually quite angry when I listened to this scene, and planned to have some words with the author! But she redeemed herself beautifully, with a solution to this problem which caught me totally unaware - and which melted my heart. Well done, Ms. Amsden!

I was very disappointed in what happened to Cassie's cousin, Jason - but I know why he made the choice he did. I just hope in the future (I know this is the last book in the series, but in case there is ever a sequel...) that Caitlin really doesn't go with him and let him turn her - for the sake of her baby! That would be horrible. ;o(

Thank you, Ms. Amsden and Ms. Reizian Frank, for a wonderful, entertaining production.

How dumb can you be?

This book has a main character that is very annoying. The choices she makes doesn't make sense and she is immature and is unable to make any smart decisions. The story line is weak and many things are not thought out. I spent most of the time listeing to the book being annoyed and rolling my eyes. so I put an end to my agony at listening to the story and just stopped. I don't even care how it ends. I wouldn't waste a credit on this one if I were you. I don't want to give any spoilers but I'll just say the that there is a lot of whining in this book.

So sad this series is over. I feel like there could have been a dozen more books and I would have loved them all. Oh well, I guess all good things must come to an end. I don’t want to say too much about the story and spoil it but I do want to add that I was happy with Cassie’s HEA. I would have loved for her to get a piece of her back but understood why she refused. I don’t think there could have been a better ending for Cassie and Evan.

this series frustrated me so much

Everything comes to a head! I love how the characters have grown throughout the series and the resolution to the long-standing feud. It would be great to see more of the secondary characters in future books. I’m sure their stories are just as gripping. A very entertaining book and series written by Christine Amsden and narrated by Melissa Reizian Frank. I was given this free review copy audiobook at my request and I have voluntarily left this review.

I became invested in Cassie's journey early on and it has been a thrilling ride. I love seeing her grow and accept herself and others around her. The narrator does a fantastic job bringing the story & characters to life.

This audio will steal your heart

Book 4 in the Cassie Scott Series Cassie Scott returns home . She noticed a few issues when she was away . She also leans that there is a soul stealer going around town manipulating people. She notices that once her father got murdered. Carrie doesn’t know how or why her father didn’t act on his magic , how his magic let him down. There are lots of levels in this audio. It was worth listening to it Melissa performance was great in this . Her voice was smooth, strong and made you listen to the audio until the end

All of the Cassie Scott books have been great to listen to, but I think this one is my favorite! So many emotions in this book. Some things didn't turn out the way I was hoping they would and some things turned out even better!! *I requested this book and am voluntarily leaving this review

the end has arrived