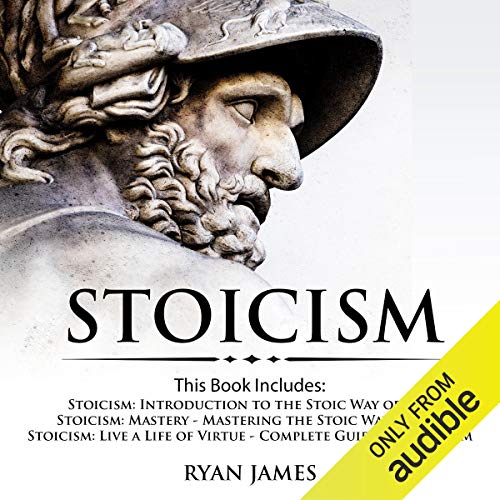 Stoicism: 3 Books in One

Stoicism: 3 Books in One

Stoicism may be an ancient philosophy, but it is one that has even more relevance to our daily lives now that we are in the modern world. Too often, we find that we aren’t able to control our lives, control the events that go on, or even control the people and how they act. But with Stoicism, we learn that we can control some things, such as our emotions and our reactions, and this can help to lead us to happiness.

In this complete guidebook, we are going to take you from the very basics of using Stoicism in your daily life, to complete mastery. We will show you how this ancient philosophy is going to work to make you feel happier and more virtuous. Some of the things that we will talk about include:

When you are ready to find the true happiness that belongs to you and bring some of the Stoic ideas into your life, make sure to follow through this guidebook and learn just how great it can be to live the Stoic way of life.

Grab your copy and start living the Stoic life today.

This is a great book on Stoicism. I found a lot of new information. This book handle good method of understanding to everyone. I like this book. Highly recommend this book

This set of book is very informative

This set of book is very informative and easy to listen to. This book is well-explained by the author. The history of Stoicism is very interesting to listen to. I also learn the common philosophies of Stoicism. I really had a worthy time listening to this book.

A fruitful listening this piece of Stoicism. I have learned the importance of patience and perseverance. It was a good book for everyone, recommended.

This book teaches me how to live better like Stoic way of life.
It changed my lifestyle, pulled me from negative vibes, taught me how to be calm when there was a problem. And also how to overcome and solve the problem. It is not just for my lifestyle but also for my attitude.

For those unfamiliar with Stoicism this may be a good introduction... It's pretty basic stuff but it is explained is an easily understandable form
It's a short easy listen

I found this book rather helpful and enjoyable to read. It's a good combination of theoretical and practical. This is a beautiful book in every way............ I found this book to be well explained, and well organized, but it can still be a bit overwhelming

This is good and helpful audio book.

There are many books published on the topic

There are many books published on the topic of Stoicism, has structured his audio book with an informative design throughout so that the reader can engage in the collection of quotes and relevant statements related to a topical theme. Yes, there are the core statements by Stoic philosophers, but has also weaved in related materials from other scholars and thinkers related to (and relevant with) Stoic philosophy.

After listing the description of this audio book,

After listing the description of this audio book, I expected that it would merely make a good reference book on Stoicism. I did not expect that I would find myself unable to put it down, but that is exactly what happened.

a very clean intro to stoicism

short and sweet. The information is very dense, a lot is thrown at you very quickly. no beating around the bush with drawn out examples.

This book is interesting to listen and the content is easy to absorb. it was a great basic lesson on the history of stoic thought but also outlined the major tenets of the philosophy. would recommend.

I’m not crazy about the narration. The cadence is kind of plodding and blunt. Also, it’s not well written and comes across like someone reading a book report. For example at one point he talks about the desire people have to exert control over outside forces (which isn’t possible) and contrasts it with the benefits of having control over your emotions. But the whole time he uses the word “control “ as a shortcut for both concepts, which is confusing. I shouldn’t try to be in control, but rather I should practice being in control?

Also, the three books aren’t defined in the chapter list, so if you want to listen to a particular one, you have to hunt around.

The whole thing feels somewhat amateurish and doesn’t give me confidence that he knows what he’s talking about. He may be an expert, though. I just don’t want to keep listening.

Gave up after 20 min

I couldn’t stand listening to this book for more than 20 minutes. I’m interested in stoicism and wanted to learn more about it. But this book sounds like it was written by a high schooler who just read the Wikipedia articles on it.

Great work on the part of the author and how this works on opening a closed mind.

In this complete guidebook we are going to take you from the very basics of using Stoicism in your daily life, to complete Mastery. We will show you how this ancient philosophy is going to work to make you feel happier and more virtuous.

I found this book to be an interesting and inspiring read. It provided me with concise, actionable ideas for using Stoicism to improve my life. I highly recommend this book to everyone, particularly those who wish to cultivate happiness in the face of adversity

A must-read on Stoicism


The author clearly described this and every step by step details how we should go through our life to achieve the best output from stoicism.

When it takes a look at stoicism in today’s culture and wraps up with how to be a stoic and some key highlights. Overall a great, educational book…particularly if you’re the type who internalizes stress/emotions and needs to learn how to cut for the purpose of your health.

Really wonderful book, especially for me! In this full guide, you will be able to find out for yourself information about the basics of using Stoicism in your everyday life. Everything is described very clearly. I recommend!