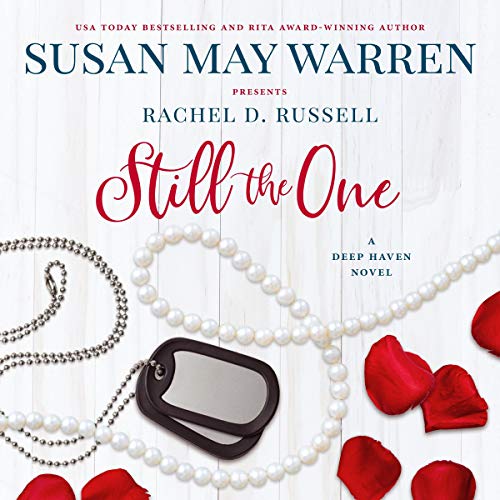 By: Susan May Warren,Rachel D. Russell
Narrated by: Brittany Goodwin
Try for £0.00

Return to Deep Haven with this sweet, romantic novel.

The last thing he wants to do is return home.

Cole Barrett, former army ranger, has a new mission objective: sell his grandfather’s house and put Deep Haven in his rearview mirror as fast as possible. Deep Haven holds the hurts of physical abuse at the hands of his grandfather, a man now in a memory care facility with dementia. Recently divorced, single, and unattached, Cole just wants a new life as a US marshal. One where he can forget the past and start new.

Unfortunately, there’s a tenant in the garage apartment who’s refusing to move. Even worse? It’s his childhood crush Megan Carter and her son.

She’s waited years for her first love to return.

Wedding planner and single mom Megan Carter is no stranger to Deep Haven. To her, it’s the place where she makes dreams come true - at least, everyone else’s. Her big dream is to purchase the Black Spruce Bed & Breakfast to turn it into a premier event venue, and if she can stay booked for enough weddings over winter, she’ll have enough money to buy the inn, move out of Grandpa Barrett’s garage apartment, and finally give her nine-year-old son Josh the life he deserves. After using part of her intended down payment to cover his hockey fees, she’s behind on her Black Spruce funds and only has 30 days to come up with 4,000 dollars.

Still, she’s oh so close...until her childhood friend-slash-crush Cole Barrett returns to Deep Haven. Unfortunately, he’s not back to fulfill a silly childhood promise to marry her, but she never expected him to evict her! The last thing she needs is more expenses. Or for another man to walk into her heart...and break it.

Maybe it’s never too late to finish a love story....

When a blizzard strikes Deep Haven and Megan is overrun with wedding catastrophes, it takes a former ranger to step in and help. But the more he comes to her rescue, the sooner she’ll be able to move out...and he can move on.

And that’s what they both want, right?

Susan May Warren is the USA Today best-selling novelist of 80 books. With more than 1.5 million books in print, she is beloved by reviewers and fans around the world. Visit Susan at susanmaywarren.com.

Rachel D. Russell is a member of Oregon Christian Writers and My Book Therapy’s Novel Academy and is a regular contributor to the Learn How to Write a Novel blog. The mother of two teenagers, she often interrogates her husband on his own military and law enforcement experience to craft believable heroes in uniform. The rest of her time is spent cantering her horse down the Oregon trails. Visit Rachel at racheldrussell.com.

Want more of Deep Haven? Check out other books, too.

What listeners say about Still the One

The story was a good one the narrator had a sing song voice that would have bee more appropriate for Children's book. It made it really hard to follow the story.

Another great book with more characters to love by Susan May Warren! Can’t wait for more!