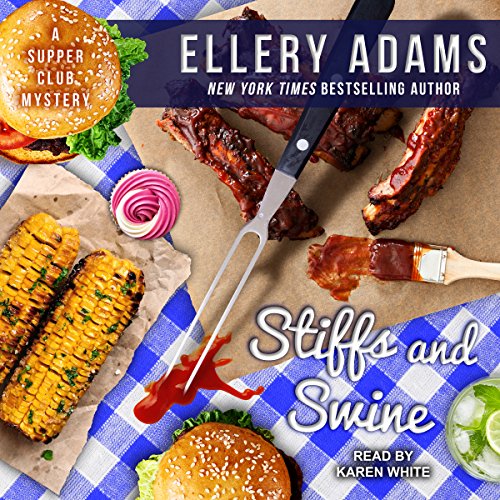 James Henry and the Flab Five are invited to serve as judges at Hog Fest, a celebrated barbecue festival in the Virginia mountains. But when one of the "pit masters" is found dead and a member of the supper club is accused of the murder, James and his friends have to lick the sauce off their fingers and get to work catching a killer.

Amid a fairground filled with colorful people and tempting food, The Flab Five are sure to fall off the diet wagon. But James Henry has more to worry about than his expanding waistline. His bookmobile is dead, suspicious activities are taking place in his beloved library, and his relationship with Murphy Alistair is on the rocks.

James needs to focus less on brisket and fried pickles and more on solving problems because Hog Fest is clearly no picnic.

"[A] rollicking adventure.... While many of the antics are hilarious...[the] characters really do have depth, the plotting is well executed, and the series becomes better with each installment." (Booklist)

What listeners say about Stiffs and Swine

This is my second time around with this series and I'm not disappointed. I love how the characters are developing. The storylines are well developed and imaginative. Karen White does a great job bringing the characters to life. I cant wait for the next book to be released.

The thing I love most about Ellery and her writing is that she creates very real characters with very real flaws. This helps to make the connection between the reader and the characters feel genuine & deep. However, because of this I really can’t stand Lucy. This book is her at her worst with selfish behavior & treating the entire supper club as being less than & below her. How she treated James by dumping him for someone better and then wanting him back irked me, and this book’s entire plot line is a continuation of that and feels rather unfair to Murphy. I won’t add any spoilers but it was upsetting and made me feel disappointed in James, which soured the book as a whole. I already know what will happen by the next book & it’s already making me hesitate even continuing with the series.

The first half of the book not up to par for this author. Dialogue slow and exaggerated. But eventually the book comes into its own and provides a good read.

One of the Supper Club gets accused of murder

It is now summer, months since their last crime case, and James and the Supper Club has its most important case yet in <strong>Stiffs and Swine</strong> by Ellery Adams. The Flab Five gets invited to serve as celebrity judges at Hog Fest, a festival celebrating BBQ everything and other activities. They first judge the pig beauty contest and are then asked to judge the BBQ brisket contest, with teams of people doing the barbecuing. Being a vegetarian, Jillian refuses, but the other four do the judging. When the winner is announced, Jimmy, the leader of the Pit Masters team, showboats his winning streak. At this point, Jillian walks toward Jimmy in a furious haze, saying he killed her husband, a fact that shocks her friends, none of whom knew that Jillian was once married.

After Jillian runs off, the four other friends look hard to locate their fifth member, but no one can find her. Finally, in exhaustion, James falls into bed only to be awakened at 7am with the news that someone has murdered Jimmy by stopping up the ventilation in Jimmy's trailer, causing the propane in his heater to kill him. Worse, Jillian has been arrested. The four friends race to find the sheriff and find proof that Jillian did not commit this crime.

<strong>Stiffs and Swine</strong>, the 4th book in the Supper Club series, is the best book in the series so far. It has a great plot and good subplots to go with the plot. We see issues related to drugs. There is also drama between James and his girlfriend, the local newspaper woman Murphy, with the added tension that James's ex-girlfriend, Lucy, still has feelings for him. In addition, the library gets faced with the fact that its old bookmobile has finally died. Finally, the library has been dealing with rowdy teenagers who fill up the building every Friday night without checking out books or doing other library business.

This book is also driven nicely with realistic characters. James and the other members of the Flab Five each come alive and behave as true people, with their own loves and jealousies. I especially love Francis and Scott, the identical twins who help James run the library. They may have minor roles, but they really delight in their enthusiasm and technical skills. Many of the characters from the Hog Fest also show realism in having both good and bad sides, leaving us to wonder which side they will choose.

The audiobook of <strong>Stiffs and Swine</strong> is performed aptly by Karen White, who has narrated the previous books in the series as well. She uses great expression without over-emoting as well as good timing. I really like the way she makes the book come alive.

<strong>Stiffs and Swine</strong> is a really good book that I enjoyed listening to. I appreciated all the aspects of this book, whether the major plot point, the more minor plot points, or the characters. I strongly recommend this book to other readers and give it five stars.