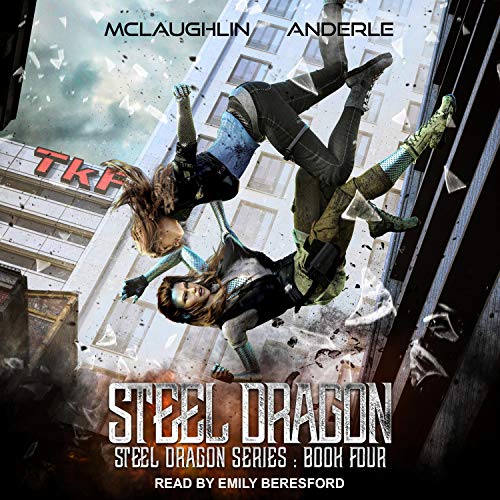 By: Kevin McLaughlin,Michael Anderle
Narrated by: Emily Beresford
Try for £0.00

The mages push Earth closer to a war that no one can win. Kristen and her team are all that stands between them and the utter annihilation of everyone she loves.

But the mages may not be the worst threat she has to face! In the shadows, someone lurks, manipulating others for his own gain.

The Mage assassins are no longer content to hide in the shadows. Their day has arrived, and they will rise to remake the world into a place without dragons.

But before she can deal with the hidden adversary, Kristen has to stop the mages from kicking off a war. They are determined to bring humanity and dragon-kind into conflict, no matter the cost.

She has the team. She has her dragon powers. Kristen even has the backing of the Council. But winning the battle to end the war will still take everything she can bring to bear, and then some!

What listeners say about Steel Dragon 4

This series just gets better and better. The first book I was kinda 'meh' because Kristen was too whiny. Now, she's the leader of a team of dragons, mages and humans fighting for equality between the races and trying to defeat the technomages.

There's plenty of action in this book, which is split into 3 parts - each one just as good as the others.

Can't wait to listen to the next, and last, book in the series.

Better than the first few but still not that good.

First, if you are an author and you use the American Civil War in a book. And you DO NOT FACT CHECK THE CIVIL WAR, and you say it was over slavery, that shows just how incompetent and lazy you really are! The Civil War WAS NOT started over slavery. It was fought over state’s rights and an over reaching federal government. Slavery was a by note used by Lincoln when the north realized they were seriously losing the war they started! By freeing slaves Lincoln thought to infuse new fighters into the North’s war machine. Also they thought to begin an insurgency of the Black population in the South. It didnt work aswell as they thought it would. We, the South lost the war because we did not have the manufacturing abilities of the north. Also the majority of Confederate Soldiers became aware that the southern government was becoming more oppressive than the Union. There were other factors aswell, but saying the Civil War was started over slavery is a lie perpetrated by corrupt politicians and propaganda of a government that wants to control every aspect of every life within American borders.

I'm honestly not sure

I have an interesting relationship with this series. Half the time I am enthralled and can't wait to listen to the next chapter. The other half I am so annoyed by the inconsistency, constantly changed lore, and sheer stupidity of the protagonists that I wonder if I should bother finishing the book.

This book is missing the first chapter. It goes from intro credits to chapter 2