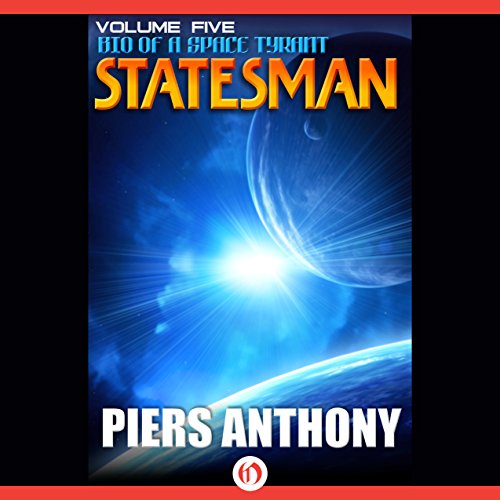 This is the fifth in the series Bio of a Space Tyrant, featuring the stages in the life of Hope Hubris, the tyrant of Jupiter, and his beloved sister, Spirit. Child of flame and terror, born and bred to violence, Hope Hubris had ruled the solar system's most powerful empire with a fierce, uncompromising passion. His was a white-hot flame of justice that scarred friend and foe alike. Yet now he left Jupiter as an exile, his autocratic rule overthrown by the one person he could not oppose. Deposed, disgraced, but forever unbroken, the tyrant's greatest hour was still to come. For only he could shoulder the burden of humanity's boldest dream: to leave behind the confines of the solar system and journey outward to the stars. The epic of Hope Hubris comes to a blazing climax!

What listeners say about Statesman

So ends the epic that is Bio of a Space Tyrant (Books 1-5) as I said in other reviews of this series Book 1 Refugee is a Horror/Dark Scifi, book 2 Mercenary is a military scifi, book 3 Politician is a mystery/espionage, book 4 a political thriller and I would call this Book 5 another scifi political thriller, but with stronger science fiction leanings. (run on sentences abound here). I found the story to be a stronger book than book 4, which I found to still be great but at times difficult to endure. Hope has seen better days, but still has a few tricks up his sleeves and enough libido to power a new form of space craft into a new era of mankind. This book has a great dawning of a new era feel and is a good way to wrap up the life of a powerful character who had it pretty damn rough, which many of you know is hard to do. (see Dark Tower series, Sten series, Gap Cycle series, and Revelation space series for other hard endings.) You owe it to yourself to wrap up this series, Book five is stronger than Book4 and probably on par with book 3. And don't y'all worry your pretty heads, it still gets pretty brutal for ole Hope.