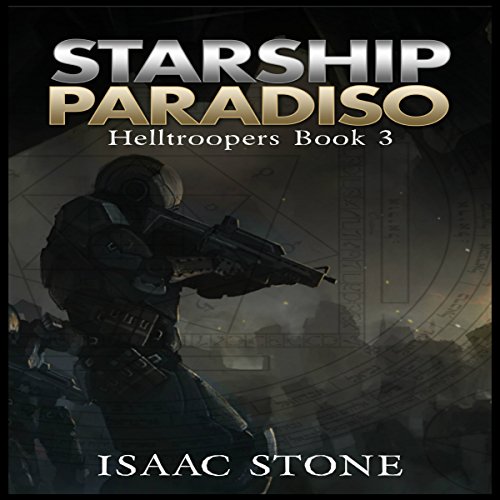 The mercs of Team Omega have lost their gunship along with their android companion, and now find themselves the newest crew of the prototype vessel Paradiso. Out of options and betrayed at every turn, the team sides with the enigmatic Simon Haddo in his mission to destroy Hell Gates positioned throughout the solar system that, if left unchecked, will usher in a new dark age of misery and suffering at the hands of demonic beings from another reality in this surreal and violent sci-fi remix of Dante's Paradiso. Strap on your power armor and get ready to fight like hell.

Would you listen to Starship Paradiso again? Why?

No the story is only one dimensional

flesh out the background information as story very linear

Have you listened to any of Persephone Rose’s other performances? How does this one compare?

i recieved this book as freebee, put that has not influenced my opinion

I enjoyed the second book more

I wasn't as engaged with this book as I was when I listened to the second book. I liked the narrator's performance. I wish I like this book better. This book seemed like an afterthought. I received this audiobook for free from Audiobook Boom for my unbiased review.

The final book in the science fiction version of Dante’s trip through the levels of hell comes to ya conclusion. The story is epic, the tale is gritty and the characters are detailed enough to easily love or hate. The final chapter is truly awesome the battles and the twists and turns are wonderful. The ending is perfect. Great trilogy. Highly recommend it. I was voluntarily provided this free review copy audiobook by the author, narrator, or publisher.

Good but start at book 1!

So, I haven't heard/read the first two books of this trilogy. Honestly, I didn't pay attention when I requested the book that it was book 3. This made it rather challenging to understand everything that was going on, and I did feel like I was missing a lot. That being said, it was still pretty entertaining, and by the end I'd made enough connections to be satisfied with the ending. I'm a little tempted to go back and listen to the first 2, but I doubt I will. I already know the ending...

Being the last book in a trilogy, I listened to books 1 and 2 and enjoyed them quite a bit. Book 3 was a little different. It did not follow the same narrative structure as the first two and at times was a little confusing. I would not say that this took away from the story, but there were brief moments when the story felt disjointed.
On the plus side, there were Tantric Sex Bullets.
All in all, I would recommend the trilogy to anyone who enjoys sci-fi or anyone who would be interested in seeing how Dante's Divine Comedy plays out in space.
The Narrator, Persephone Rose, was great as always. He has an exuberance that he brings to the reading and the characters. Definitely will be listening to more of his work.

I was given a free copy of this audio book and have left a voluntary review.

Nothing ... makes sense when you really look at it

The third, and final, stage of the modern rewrite of Dante's epic poem, and it is advisable to have first read the earlier books before this one or confusion could run high despite the occasional explanations inserts along the way. Once again the Team Omega with Ash, now also joined with their erstwhile quarry, Haddo, attempt to save the universe, this time from the Corporation, by removing several beacons which, once activated, would permanently open the doorways to the incoming demons. So far, so straightforward, with tense expectation of opposition and action. But then it all becomes just a little bit more complicated ...
As always, the narration of Persephone Rose is excellent and it was only this reading which carried me through to the final conclusion.

Overall, an enjoyable series but this, the last book, is the weakest, although somewhat redeemed by the ending.

Conclusion of the trilogy.

I now have listened to all three books of this series and I find that all three books of their own distinct story structure. i.e. each book sounds different from each other, even though they are part of the same series. I hadn't liked the first book and had liked the second one. This last book is somewhere in the middle. This being the concluding book of the series, it had lots of action and there were intense moments during the last quarter of the book. But towards the beginning and middle of the book, it felt like the story has gone stale and is dragging. Things felt disjointed and confused. Thankfully the climax wrapped the main plot up properly.

Would you ever listen to anything by Isaac Stone again?

Absolutely. The narration in this book was good and I have no complaints. Thus I am open to listening to other works from Persephone Rose.

Was Starship Paradiso worth the listening time?

I would say yes, if you want to see Dante's classic adapted as space opera. This book has a unique take on it which you'll like.