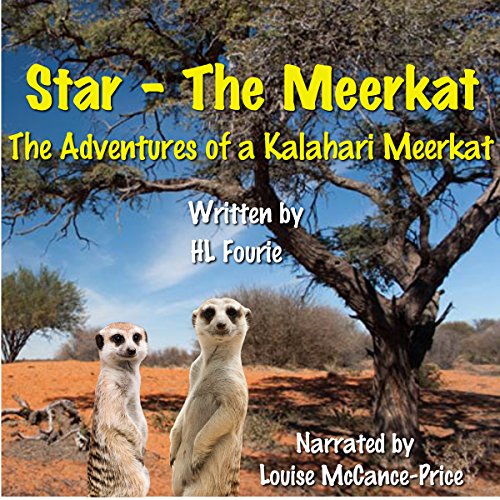 By: HL Fourie
Narrated by: Louise McCance-Price
Try for £0.00

Follow the life and adventures of Star the meerkat as she grows up in the Kalahari desert of southern Africa. Listen to this story of how Star overcomes the dangers and challenges of her harsh environment with the help of her mother Naledi and other members of the meerkat clan. Learn about the many fascinating creatures of that inhabit this desert region and how they survive predators, storms and drought.

Star is born one starry night in a meerkat warren in the middle of the Kalahari desert. Star is an inquisitive young meerkat pup who is part of a meerkat clan led by her mother Naledi. At first Star lives in a chamber deep in the warren but at two weeks she is led to the surface by Naledi where she encounters the many different sights, sounds, and smells of the African savannah. Star now starts meerkat school where she learns all that is needed to survive in this hostile environment filled with predators and a myriad of other creatures.

As she grows she learns her responsibilities as a member of the clan and has several adventures as she encounters snakes, raptors, and marauding bands of hostile meerkats.

It is an exciting tale that exposes the listener to the lives of meerkats in the Kalahari, their enjoyment of their surroundings and how they overcome the perils that they face.

The book includes a glossary that provides additional information on the animals and locale.

What listeners say about Star the Meerkat: The Adventures of a Kalahari Meerkat