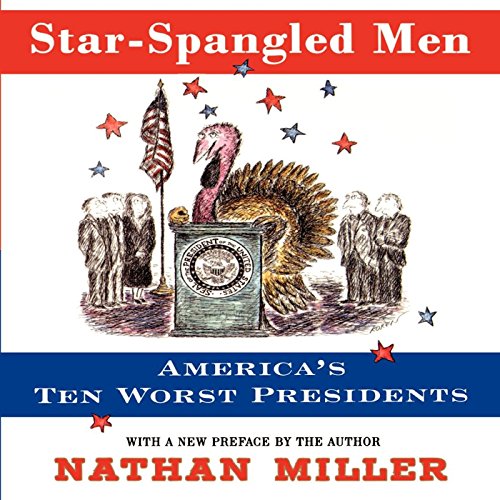 Picking America's best presidents is easy. George Washington, Abraham Lincoln, and Franklin D. Roosevelt usually lead the list. But choosing the nation's worst presidents requires more thought. In Star-Spangled Men, respected presidential biographer Nathan Miller puts on display those leaders who were abject failures as chief executive. With pointed humor and a deft hand, he presents a rogues' gallery of the men who dropped the presidential ball, and sometimes their pants as well.

Miller includes Richard M. Nixon, who was forced to resign to escape impeachment; Jimmy Carter, who proved that the White House is not the place for on-the-job training; and Warren G. Harding, who gave "being in the closet" new meaning as he carried on extramarital interludes in one near the Oval Office. This current edition also includes a new assessment of Bill Clinton - who has admitted lying to his family, his aides, his cabinet, and the American people.

A nice brief recap of arguably the worst presidents. Narrator is a bit too enthusiastic, taking in audible deep breaths before launcing off each new sentence!

Fun, easy to listen to

This is a bipartisan roast of various presidents. Historical facts are mixed with amusing anecdotes to keep it flowing. Sometimes one could sense a positive glee in the author, painting a caricature of one or another fellow -- Nixon, Harding, etc. And who can blame him? This is a nice break for me from deeply straight-faced, intensively scholarly works. A couple of my favorites are the 2 "overrated" presidents at the end -- Jefferson and JFK. Of course the listener may find one or more things to disagree with -- I always hope for some of those! I want my existing notions shaken and tested.

The author critiques his ten worst presidents with humor and insight. He backs up his criticism with facts while acknowledging that other interpretations are valid. The piece is relatively light in tone and makes easy listening.

He has Democrats and Republicans on his list and there does not seem to be any agenda he is pushing. For example, there are bad isolationists and bad expansionists. His idea of "badness" is mostly (lack of) character driven e.g. Nixon, but overall (lack of) performance also makes someone a target, e.g. Carter.

I would recommend the book to anyone interested in a critical look at American politics without a demagogue's screed.

For fans of the Presidency, this ranking of the ten worst executives provides fun but cursory reading. When ranking the best or worst Presidents, there is often broad consensus and little controversy over say the top five and the same applies here. It is when you get to six through ten that the disagreements and, well, fun set in. I can't say I was surprised by any of the men in Miller's list nor their rankings. Therefore, you won't find any surprises in here. He does a nice job providing a brief bio of each of his subjects as well as his reasons for why theirs was a failed or disappointing Presidency. None of it is approached in a scholarly fashion, but more as an extended op ed piece and I thought it was approached in a generally unbiased manner. It all makes for lightweight reading that will appeal to those with an interest in the presidency and historical trivia. Note that this was written during the Clinton administration so he, George W Bush and Barack Obama are excluded. An added bonus feature at the end are the two most overrated Presidents one of whom frankly surprised me.