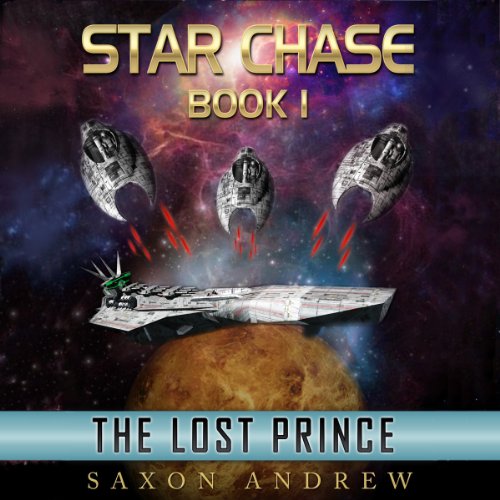 From the number one best-selling author Saxon Andrew comes the first book in his newest series, Star Chase - The Lost Prince

. This new series takes place a thousand years in Earth's future after mankind has moved out into the galaxy. With new characters and powerful enemies, the series will hook you from the start.

The worlds in the Orion Nebula had been planning rebellion against the Galactic Union for more than a hundred years. Now the rebellion has started with a sneak attack against the Royal Family on Euclid. The planetary defenses were temporarily suppressed and the attack on the Royal Palace killed everyone including half of the invaders. But one member of the Royal Family wasn't in the palace when the invaders struck. The attackers were forced to flee as the Obelisk began defeating the suppression field and began to come back on line. The attacking transports fled the planet but not before two of them were vaporized. Before they left Euclid, they determined that the Prince was no longer on the planet.

The Nebula chose their most powerful warrior to find him. There was little chance of the Prince escaping the Dark Officer. He was a High Genetic and possessed unique tracking skills. The only question was how many were going to die before he was successful.

What the Nebula and Union didn't know was that all of them were at risk of being destroyed and the Prince was the only one that could save them. Would they find out in time? The action is nonstop in Star Chase, as the Prince runs to save himself and the Union

Not A bad Start

I enjoy a good solid space opera, like Lois McMasters Bujold, and although this comes nowhere near her later Miles Series I can find something in this first book, (first I've read) that does recall some of her earliest work.
The characters are not terribly well developed but there are some humorous moments. The battles are light on science but I don't think that's the point, so that was fine with me.
Overall I will try another bite and see how it tastes. Perhaps a better narrator will improve the quality.

Would you listen to Star Chase - The Lost Prince again? Why?

Yes This is a light story easy on the MINE. EASY LISTENING AND LIGHT . SOME ADVENTURES, AND ROMANCE AND SURPRISES. A SWEET STORY.
.