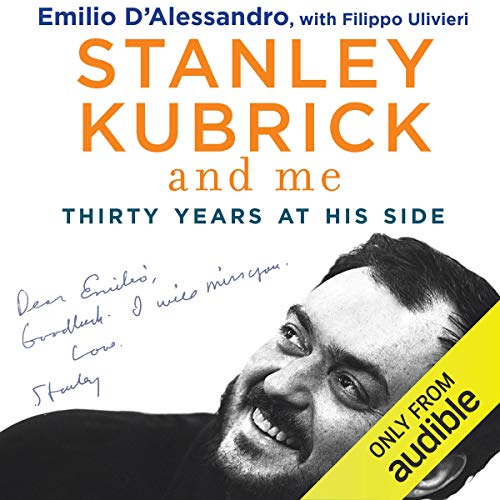 Stanley Kubrick and Me

This intimate portrait by his former personal assistant and confidante reveals the man behind the legendary filmmaker - for the first time.

Stanley Kubrick, the director of a string of timeless movies from Lolita and Dr. Strangelove to A Clockwork Orange, 2001: A Space Odyssey, Full Metal Jacket, and others, has always been depicted by the media as the Howard Hughes of filmmakers, a weird artist obsessed with his work and privacy to the point of madness. But who was he really? Emilio D'Alessandro lets us see. A former Formula Ford driver who was a minicab chauffeur in London during the Swinging Sixties, he took a job driving a giant phallus through the city that became his introduction to the director. Honest, reliable, and ready to take on any task, Emilio found his way into Kubrick's neurotic, obsessive heart. He became his personal assistant, his right-hand man and confidant, working for him from A Clockwork Orange until Kubrick's death in 1999.

Emilio was the silent guy in the room when the script for The Shining was discussed. He still has the coat Jack Nicholson used in the movie. He was an extra on the set of Eyes Wide Shut, Kubrick's last movie. He knew all the actors and producers Kubrick worked with; he observed firsthand Kubrick's working methods, down to the smallest detail. Making no claim of expertise in cinematography, but with plenty of anecdotes, he offers a completely fresh perspective on the artist and a warm, affecting portrait of a generous, kind, caring man who was a perfectionist in work and life.

What listeners say about Stanley Kubrick and Me

A wonderful memoir about an incredible filmmaker!

Such a brilliant memoir; recommended for all fans of filmmaking and the cinema of Stanley Kubrick.

Simply the best audiobook I’ve listened to. Such a great story. Wish it didn’t end!

This was a compelling story, and an incredible insight into this amazing man. It was like being behind the scenes on some great movies, and I really felt emotional at various stages. Highly recommended.

Kubrick fan ? Must read! Fans of a great story of friendship family dedication must read!

One of the greatest books I’ve ever heard or read, im a Kubrick fan so obviously love this book, but even if your not this is still an incredible story told so incredibly beautifully, I enjoyed every page and will definitely read again at some point, I laughed I smiled I cried my heart was warmed, it taught me an incredible amount about friendship and loyalty. Emilio did an incredible job... listen to this audio ! Or read the book ! Couldn’t rate it higher.Stanley and Emilio forever !

I only had a vague idea of Stanley Kubrick as a person although I've always loved his films. the insight into his everyday life and the making of some of these films but much more his relationship with Emelio is engaging and informative. it gives you a real sense of Stanley the man as well as film director. I realised that I'd become involved with the characters when two moments of unexpected tragedy affected me too.

the performance of the reader is excellent too and I can't recommend this book too highly for anyone interested in films, Stanley Kubrick or even as simply a life well lived.

Almost a Hagiography, yet very good

Stanley Kubrick is one of my favourite directors and I love most of his work. This book is unique, it gives a unique lens of his 'man Friday', on who the man was, his love of films, family and his animals. It is easy to see how devoted to Kubrick Emilio was, and gives a great tour of his personal life, but does provide little insight on his craft or how he changed as a director over the 30 years of his career. The audio performance is brilliant.

The human story of Stanley Kubrick

A very moving tale that shows how important people can be to each other. If you want to learn about who Kubrick was rather than about Kubrick's films (though gives you a good idea what perseverance you'll need to make films like his) then this book revealed a less cynical human side to someone who is considered one of the greatest film directors of all time. Emilio story is beautiful and the prose is very moving. Let them both become a part of your life for a couple of hours.

A Great story of friendship and cinema

If you like cinema, you'll love this book. Great to learn about Kubrick's personality and work ethic

Wasn't sure about this book when I first started listening but it wasn't long before I was hooked. So stick with it as it's a fascinating insight into a heartwarming freindship and an amazing life. 5⭐

a man works for a work-a-holic and tells his story. not funny or edgy or interesting.

An all encompassing masterpiece about a one of a kind, talented and compassionate man, told by his true equal- an angel and an absolute companion. Worth a second listen.

This book has done what very few books ever achieve, it’s given me both insight and also touches me deeply. If you are a filmmaker or a cinephile obsessed with the master then read this, read every last word of it. This will leave an indelible impression on me and my life, I can sense it. Such a damn good combination of humanity and technical film process. Thank you very much Emilio. This book has meant a lot to me. And to the narrator and all else involved in brining it to the public. Encore?....

I found this randomly on audible and have always been a fan of Kubrick so decided to give it a listening and it turned out to be so much more than I expected, a beautiful story of true friendship. Thank you Emilio.

I’m a huge fan of Kubrick and this is the best book about him I’ve ever read/listened to. If you’ve seen the movie about Emilio, this offers much more than that. So many details. This was an absolute treat for fans of Kubrick. During some sections it felt like a series of anecdotes more than a story but that’s where all the gold nuggets of details of Kubrick and his iconic films are found. If you’re not familiar with his films than these parts may not be your favorite. Towards the end I was moved by the story of Emilio and how he and Stanley supported one another. Very beautiful and thoughtful ending. The performance of the audiobook was also really enjoyable. 5 stars across the board. I haven’t enjoyed an Audiobook like this in a long time.

Enjoyed every word, such a fascinating story.

Interesting at every turn... it's totally a worth read. It's very honest and very heart-felt

Emilio does a fantastic job of faithfully documenting the details of a fascinating shared life. Not every anecdote is essential, but often the author's digressions are more tasteful than most.

Humanity’ as it best really fantastic and lovely
A must read/hear. Do it now

What a nice listen!

As an avid film fan this story was not only interesting, but informative, endearing, and sprinkled with just enough humor to keep everyone entertained.