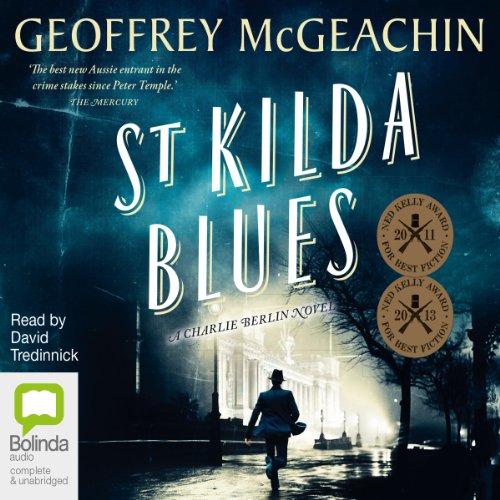 It's 1967, the summer of love, and in swinging Melbourne Detective Sergeant Charlie Berlin has been hauled out of exile in the Fraud Squad to investigate the disappearance of a teenage girl, the daughter of a powerful and politically connected property developer. As Berlin's inquiries uncover more missing girls he gets an uneasy feeling he may be dealing with the city's first serial killer.

Berlin's investigation leads him through inner-city discothèques, hip photographic studios, the emerging drug culture, and into the seedy back streets of St Kilda. The investigation also brings up ghosts of Berlin's past as a bomber pilot and POW in Europe and disturbing memories of the casual murder of a young woman he witnessed on a snow-covered road in Poland in the war's dying days.

As in war, some victories come at a terrible cost and Berlin will have to face an awful truth and endure an unimaginable loss before his investigation is over.

Would you listen to St Kilda Blues again? Why?

When they catch the murderer and how that all came together

novel and a half

Added to a fine Aussie police procedural is a story of an immigrant orphan, the emotional recovery of a shot down bomber pilot, a talented woman breaking yet another glass ceiling, the advice of a charming yet mysterious uncle spy, the ups and downs of parenthood, an intercontinental tour of 1960s airliners and the piecing together of war crimes. This novel is a brilliant favorite, I find myself rereading over and over.

Ugh, this was supposed to be a thriller. It was a decent thriller for quite awhile with some gruesome aspects. Then it turned into an unrealistic "soft" story with too many 1960s stereotype characters and impossible coincidences. It seemed like the book would never end and then it did with a thud.

Would you listen to St Kilda Blues again? Why?

What does David Tredinnick bring to the story that you wouldn’t experience if you just read the book?

not just keeped me listening

This series keeps getting better

This is the third Charlie Berlin book I have listened to and they have gotten better and better.
In my experience this is contrary to many writers whose series characters get stale and repetitive.
Charlie's character gets deeper, more interesting and more compelling. The plot, particularly the more interesting sub plots, is not predictable and unlike many books of it's ilk I had no idea it would go where it would go. I will admit that the core mystery was fairly straightforward and did not hold a lot of surprises, which is why I gave the story a 4 and not a 5.
Narrator was excellent. One thing that he did well, for a man, was to read the women's parts. I will often cringe when I hear a narrator do the other sex but not here. Tredinick had good rhythm and pace and so far as I can tell, authentic accents. And Geoff McGeachin gets better, I am looking forward to the next instalment.

Would you consider the audio edition of St Kilda Blues to be better than the print version?

I like hearing the local accents and rhythms. And as I very seldom have time to actually sit down and read a book this was a great experience - a window into another time and place I wouldn't have got if it weren't on audible.

It was very well written. I liked that the author stuck to Charlie's point of view without apologizing or catering to modern sensibilities. He let the Character unfold slowly through the story rather than do an upfront exposition so there were two mysteries - the main plot and who exactly is Charlie Berlin.

Which character – as performed by David Tredinnick – was your favorite?

Charlie of course but I also loved his beautiful and talented wife.

the moment when he tried to comprehend what happened to his daughter and all his initial reactions in trying to grapple with it was heart-rending. A less brave writer would have stopped to story at the devastating revelation but McGeachin risked sleep-walking us then the slow numb afterwards. it was so visceral and so real to the experience of loss.

I would like to try more of this series.