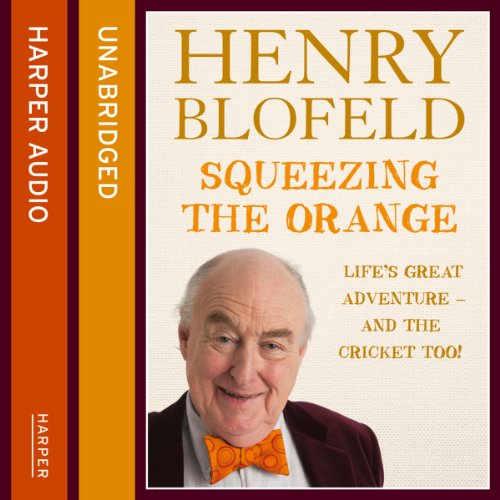 Born in Norfolk and educated at Eton and Cambridge, Henry Calthorpe Blofeld OBE, nicknamed "Blowers" by the late Brian Johnston, is best known as a cricket commentator for Test Match Special on BBC Radio 4 and BBC Radio 5 Live Sports Extra. His distinctively rich, cut-glass voice and his vividly eccentric observations of life on and off the pitch, have made him a household name, not only in Britain but around the world, wherever cricket is played. Blowers has been close to the heart of the game for over 50 years and his career has taken him to the far corners of the Earth.

This autobiography, stuffed to the gunwhales with delicious anecdotes, brings his astonishingly colourful story bang up to date.

What listeners say about Squeezing the Orange

Most entertaining orange juice ever !

Would you consider the audio edition of Squeezing the Orange to be better than the print version?

Yes definitely - to hear it in Blower`s wonderful voice is a must.

The wonderfully descriptive nature to the stories much like his cricket commentary.

Which character – as performed by Henry Blofeld – was your favourite?

I've just finished this bucolic memoir, as Henry meanders throughout his life, from Nanny bowling in the garden to a charming love letter to his wife, taking in wine, cricket, adventure and enjoyment all the way along.

For many fans of cricket, they'll have a voice they associate with the game, for many it's Arlott or Johnners, but for me it's always been Blowers. Those rich tones float out and turn what from anyone else would be another turgid maiden, into a thrilling, edge-of-the-seat-contest between bat and ball.

Whilst there's probably too much cricket in this for many non-fans, Henry's mellifluous tones, and zest for life are a treat in themselves, and bring to mind everything wonderful about being British.

There are some sounds that epitomise Britishness.
Church bells on a Sunday morning, the thwack of willow on leather and test match special.
Henry Blofeld or 'Blowers' is a voice that I will always associate with lazy summers as the sound if long wave radio drifted through the house or over the garden hedge.

An interesting tale from a classic Bon Viveur. Much like Test Match Special from where Blofeld found fame, sit back and let his voice wash over you as you would with his cricket commentary.

Where does Squeezing the Orange rank among all the audiobooks you’ve listened to so far?

Have you listened to any of Henry Blofeld’s other performances? How does this one compare?

Yes, a comedy show. This one is brilliant

This is a marvelous book with loads of funny stories and happenings from Blowers life. Also, a brief glimps in to a world many of us will never know of Eton college and so forth. A must read for listeners to Test Match Special or just lovers of cricket. Brilliantly read and wonderfully written too it is one of the best books I have read this year.

Great read! Entertaining, ball after ball and every classy cover drive. Look forward to the next innings!

I thoroughly enjoyed this book.A fascinating character who has lived an extraordinary life. I will read more of his books.

Whilst the first 9 Chapters are engaging and interesting, covering early years and career progression, the latter half of the book is a haphazard charge around Henry’s life. Whilst there are occasional interesting stories the second half let’s down the first. Bowled first ball after drinks.

What a wonderful story from Henry. Hilariously written and delivered in his wonderful honeyed tones, this is a book which will have you splitting your sides. Packed full of hilarious anecdotes it's a wonderful read for anyone who loves a deft turn of phrase and cocking a snook at some of modern life's absurdities

To be fair to Blowers, I suppose it should have been clear that the cricket wouldn't be the main part of the story, but the endless listing of names of friends, who were all the best cooks, friends, wits, businessmen, golfers or chums from the most privileged end of society made this a long and largely unsatisfying listen. So a simply marvellous friend was out for a duck? So what. I have one of those. Sorry Henry, I really enjoy the commentary but I missed the point of this one

I'm not a real cricket fan now but I enjoyed listening to Henry on TMS. So I bought this book and was not in the least disappointed. I was very disappointed when it came to an end. It was very well written and no one could have read it better. His exploits had me chuckling as did his self deprication. Very much well worth a listen to. Brilliant.