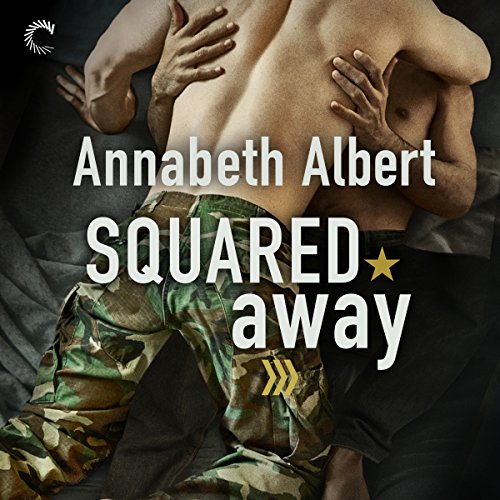 By: Annabeth Albert
Narrated by: Greg Boudreaux
Try for £0.00

In the wake of tragedy, SEAL Mark Whitley rushed stateside to act as guardian to his sister’s three young children. But a conflicting will could give custody to someone else - someone Mark remembers as a too-young, too-hot, wild party boy. Even after six years, Mark can’t shake the memory of his close encounter with Isaiah James, or face up to what it says about his own sexuality.

Isaiah’s totally over the crush that made him proposition Mark all those years ago. In fact, he’s done with crushing on the wrong men altogether. For now, he’s throwing himself into proving he’s the best person to care for his cousin’s kids. But there’s no denying there’s something sexy about a big, tough military man with a baby in his arms.

As the legal details get sorted out, their long-buried attraction resurfaces, leading to intimate evenings after the kids are tucked in. A forever future is within reach for all of them, if only Mark can find the courage he needs to trust Isaiah with his secrets - and his heart.

This book is approximately 80,000 words.

This title is part of the Carina Press Romance Promise: all the romance you’re looking for with an HEA/HFN. It’s a promise!

What listeners say about Squared Away

Oooo my God this was cheesy

In my opinion the whole Out of Uniform series is mediocre. But this one was especially cheesy. Even Greg Boudreaux couldn't save it. And I missed the sex scenes.

This book will touch your soul and heart

The narration is just FANTASTIC, Greg Boudreaux is an amazing performer with an innate sense for emotion and delicate tone changes. I read this book before I listened to the audio, and because I knew he will narrate it after he narrated book #4 in the series (my absolute favorite!) he had some BIG expectations to live up to.And boy did he ever! Greg took this wonderful book and infused it with emotion and life, the children's tiny cries and funny comments, Marks tough seal voice and Isaiah's charming personality. In a live video he did on facebook he spoke about getting ready to narrate and he said he reads the book first and really tries to narrate the book they way he felt it while reading. I can honestly say he narrated the book the way I imagined it should be but with so much more I could not know to expect. His voice is so versatile an he knows just the right moment to change it to maximum effect. i enjoyed this book the second time just as much, if not more, than the first time.

This is a book about family, and love, it's infused into every word and character and seeps into you when you read it. Mark and Isaiah are PERFECTION together, first of all as partners in taking care of their three nephews while coping with the loss of the children's parents, Mark's sister and Isaiah's cousin who was more like a brother, in terrible circumstances. The kids are young, and need constant care, so both men throw themselves into the role of caregivers with hardly any time to cope with their own loss and grief. This turbulent time forces them to see the best in each other, lean on each other and soon the need for comfort is too great.

Mark and Isaiah form an incredibly delicate, impossibly sensual connection that is so unlike most M/M book out there it's almost magical to read. And it focuses so much on the emotional bond, between them and the family they slowly become with their nephews, children they start thinking of as their own. This is the best thing about Squared Away, the emotional bond, between all the characters, some from previous books, but always at the forefront are Mark and Isaiah. The kids, Daphne, Zoe and little Liam are just adorable! And you really get the feeling of them dealing with all the hardships of parenting, there is no sugarcoating and most of the time is spent around the kid's needs.
Mark and Isaiah's intimate interactions were so amazing to read, really putting the E in erotic, but not like you would expect! I do not want to spoil anyone's reading so I will only say this: Annabeth is a MASTER at bringing unique characters, making them feel alive. Part of that is the fact she brings diverse sexualities and gender identities into play, and this quality in her writing is exceptionally good in this story. I will not divulge it exactly, as I feel it’s an important part of the book and characters, but again- it's very unlike most M/M books and it managed to be incredibly erotic and sensual, to a point I was squirming in my seat while I was reading. It was HOT in the depth of emotion and not so much the graphic descriptions. And it is refreshing and real and so fitting for this story, it was a story I was invested in with my heart and soul through and through.

This book has many deep emotions but no major drama moments, which is 'just right' for these two amazing men. It's like the saying "silent water runs deep", this book will borrow into your heart and stay there! The ending was pure MAGIC in both the setting and how they figured out the way they want their future to be as a family. I was clutching my chest all teary eyed, emotionally wreaked. Another amazing book in a wonderful series, Annabeth is a one-click author for me and I am so looking forward to more books in the series!

Loved every word of this one and Greg did his usual fantastic job. This one is now my favorite in this series.

I don’t think this is too much of a spoiler and I think people would want to know and I think you should read this regardless – but… Mark is Gray Asexual.

Definition: From AVENwiki. Sexuality is not black and white; some people identify in the gray(spelled “grey” in some countries) area between asexual and sexual. People who identify as gray-A can include, but are not limited to those who: do not normally experience sexual attraction, but do experience it sometimes.

This story was very touching, emotional and hot despite it’s non-traditional characters. I was really rooting for the two of them and it made every physical encounter that much more resonant for what it meant to each man.

The family stuff gets in the way – and that too felt really “real”.

Highly recommended- esp for the HEA!

(I don’t think you need to have read the others in the series to appreciate this book.)

Greg is an absolutely amazing performer and there are not enough words to describe how important the difference is between what he does and simply “narration”. I love the emotion he infuses as well as his ability to make each character feel unique and special both with accents and inflection/pacing/personality, etc.

This is the best way to enjoy this series and is highly recommended!

Second time around for this book and all the other Out of Uniform series. Love Annabeth's work, great portrayals, struggles. Very believable. And Greg Boudreaux is always a favorite. Kudos to all

So sweet and romantic

Just a fun phenomenal read that's also worth a listen if you don't have the time.

Unbalanced approach between Mark and Isaiah

great to see a main character on the ace spectrum!

I love listening to books where one of the main characters is on the ace spectrum. It's really refreshing to read a book where the main characters don't fall into excessive sex just because they found their person. The story was amazing as was the performance. The dual guardianship scenario can easily read as a trope, but this book actually did it really well and in a far more realistic way then most.

My favorite book from this series I just adored the story of Isaiah and Mark. Greg Boudreaux narration brings it all together. One of my all time favorite listens

It took some time but loved this

I must admit that I love this series. There is just something about mm and uniforms that make me happy. We first meet Isaiah way back in At Attention as Dylan's roommate and a friend of Ben's we did not know a lot about his aside from the fact that he had a thing for military guys. In this book we get to know more about him and why he is the way he is.

I loved that fact that Isaiah is the type of person who knows what he wants and does not waver. When we meet him in this book, he is ready to step up and to take care of his nieces and nephews single handedly. He understands that up until this point he just worked but was not stable until he realized that there would be little humans depending on him. I fell in love with him and was routing for him since the start.

I enjoyed Mark at times. He was the type of character that you did not know if you would like him or not. The story had to progress so that I could decide on how I felt about him. I did not figure out if I liked his character or not until the last 3 chapters. The entire time he was selfish, and self-involved. I do understand that he lost his sister and his family is not the best, but he kept treating Isaiah as though he was just there and not someone that knows the kids better than he did.

The ending was cute and when Mark got it together the story was great. I loved the fact that kids played equal parts within this story. They were not in the background minding their business but in there playing a part.

Best book yet, get the tissues ready.

You can see what is coming but it's how they get there that pulls at your heart. loved this book and it was a pleasure to listen to. much better than book 4.