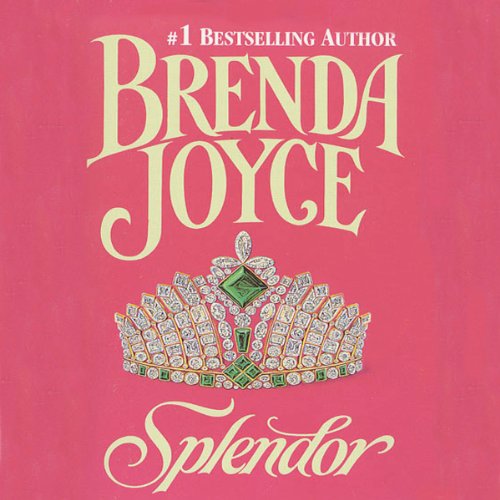 By: Brenda Joyce
Narrated by: Marian Hussey
Try for £0.00

She played a dangerous game.

He was a dangerous target. His notoriety, extravagances, and indulgent disregard for social convention fuel Carolyn's outrage. Nicholas has moved through the balls and soirees of high society effortlessly, a natural target of gossip, envy, and desire. But Nicholas is furious to find himself lampooned by Copperville, and quickly discovers Carolyn's dearly held secret. Now, as the two spar, a new game begins - a game of deception and pride, of longing and chance.

And they played for the ultimate prize... As Nicholas sweeps Carolyn from the teeming streets and gala balls of Regency London to the splendor and majesty of St. Petersburg, against all odds the unlikely lovers embark upon a whirlwind of passion and peril until there is no turning back - for the stakes have changed, demanding no less of them than the unwavering courage to claim the love of a lifetime.

What listeners say about Splendor

I needed a break from several 'series' books that I've been reading and came across this one. It had really mixed reviews, both here and on Amazon. I decided to go for it, knowing that Audibles guarantee makes it worth the risk. It seems, based on the reviews, that people either loved it, or hated it. I happen to be one of the ones that loved it.

It took me a minute, as it always does, to get used to the new story and the narrator. This is actually my first time listening to Marion Hussey and I really loved the voice variations. She does a fantastic job performing, and managing, the various characters. It was super easy to follow who was who just based on the voices. I felt that Caroline's voice was too "whiney" for her character and at times it was really annoying, but it wasn't a huge deal and definitely not a deal breaker.

I especially appreciated the lightheartedness of the story. The main characters weren't overly dramatic when they learned the secrets the others had. Nicolas found Caroline's "deception" humorous and I was so happy not to have to deal with his anger and her regret. There wasn't a tremendous amount of sex, however the sexual tension was palpable.

I had a hard time putting this book down, and found myself looking for things to do just to buy myself some extra time listening. At the same time I was trying to take my time so it wouldn't be over too fast.

I would recommend you get it and try it. Audible has that fan-freaking-tastic guarantee so if you decide you hate it you can get a refund. Whats to lose?

I decided to buy this book because of Caroline's recommendation and I was so impressed with the book. I could easily relate to being 18 years of age with emotions running rampant. Where you want a love that seems impossible, and that you want a fairy tale romance, and you realize there is fairy tales and then there is reality. This one gives you a nice little mix of both.

I love that this book dangles on the reality edge with things not always appearing as they seem. With Nicholas being married and having a child, you know you wouuld think that would send a young girl, especially an enlightened thinker such as Ms. Brown running towards the hills. You would also think that being such an opinionated female, that she would be just fine with a husband like the man who was courting her, Anthony, one that she could talk to about her opinions and have him not say much of anything. BUT! in the end, you realize that her being safe and accepting Anthony would not have been good at all.

Carolyn masquerading as a man is not only hilarious but also a break in the same old love story... and plus it puts more of the time era into perspective. Plus it gives reader a chance to take a break into the mind of a woman who realizes that she is a woman but just wants to be equals.

Her verbal sparring with Prince Nicolas is wonderful. It shows that she is yes, in fact 19 and young, while he being a man of the world, shows it, but yet does not overpower her. Ms. Brown can fully hold her own.

I really enjoy the way Brenda Joyce takes you inside of the mind of both characters. Sometimes, with a lot of novels, and especially romance novels, most of the writing seems so one sided, just from one point of view. And that does not serve for a love story at all. She gives insight from all of the characters, included the estranged ex-wife and Nicolas' brother Alexi. (I love the use of nicknames in this book, it made it so much more personal, like you could get to know the characters one on one).

I also appreciate that the Prince Nicholas character is not so dramatically brooding, he does smile and likes nicknames. The fact that he does smile and has a funny bone is a good thing and a good break in humor in such an emotional read.

Marian Hussey was wonderful in her delivery of the story.

I JUST COULD NOT STOP LISTENING

Wow, what a beautiful, heart wrenching, compelling, intense love story that's bursting with all the usual words we use to describe such books - passionate, touching, tender, romantic etc., etc., but this listen takes them then inserts them into a bitter-sweet heartbreaking romance that's caught between the streets of 1812 England and the traumatic Russian War and then, those words, just seem such inadequate descriptions.

Carolyn (witty, smart, loving, caring, naive book seller and clever satirist for a National Paper) starts pursuing and spying on Nicholas (strong, gorgeous, sexy, powerful Russian Prince and loving Father) for more gossip on him for her column and a delicious humorous game of cat and mouse soon develops. As the sexual chemistry sizzles between them and their passion quickly grows out of control, unfortunately the pair are faced with class differences, surprises, secrets, blackmail, war, painful twists and turns, jealousy and the consequences must be overcome as Nicholas has responsibilities and commitments that will have a hideous impact on their lives.

Interesting selection of secondary characters, including his 7 year old daughter, that bring either destruction or support to the lovers affair.

Worth a credit? A well-written, epic journey that proves love can conquer all - with so many highs and lows that makes this, not only much more than the usual historical romance, but it's also (preferably) a non stop listen. So YES very creditworthy but, for the 'must be historically correct' listener, there were the few instances of 'wouldn't have happened in that era' so please remember this is an enjoyable, entertaining Fictional story so who cares!!

Wow what an incredible book! From beginning to end it was light then intense, I became so invested in these characters wanting them to find there hea. The narrator is very good too and helped bring this book alive for me.

Wonderful story of an intelligent woman who breaks through the gender barrier of her time to voice her opinions in a thoughtful manner. She even attracts a nobleman and her grandma along the way.

this was hard for me to get through I'm not really interested in stories of infidelity. in my opinion it was a waste of a credit and I did not finish this book

the heroine is rather weak

Many, many chapters of the same troubled romantic angst. The heroine and hero nith seemed a bit weak to me. i skipped 2 if the last 3 chapters. It's clear where the story is going but takes too long to get there.

Was very engaging. ..Mary Elena finally got her due! It was a lovely story...it is predictable. I wish there was more of Nikolas' view which the story lacked, but I am really enjoying Brenda Joyce's books as much Julie Garwood.