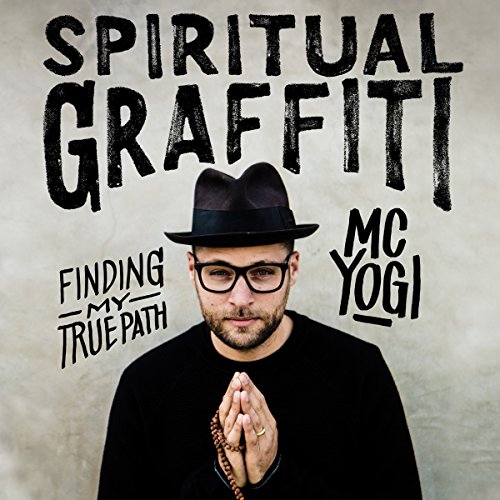 Before he was one of the most well-known yoga teachers in North America and an international hip-hop artist, MC YOGI was a juvenile delinquent who was kicked out of three schools, sent to live at a group home for at-risk youth, arrested for vandalism, and caught up in a world of drugs, chaos, and carelessness.

At 18 fate brought him to his first yoga class. After discovering yoga, MC YOGI devoted himself to the practice. From traveling to India to study with gurus to living and learning with many American yoga masters, MC YOGI soaked in the knowledge that would revolutionize his entire life and put him on the path to healing, wholeness, and peace.

Through Technicolor stories of graffiti and guns, mystics and musicians, love, loss, and finding his soul's purpose, MC YOGI's journey is saturated in spiritual wisdom, illuminating the potential for transformation within us all.

MC YOGI is a world-renowned yoga teacher and musician. He has performed and taught yoga everywhere, from headlining festivals and nightclubs to performing in the Forbidden City in China and even at the White House. When not on the road, MC YOGI and his wife, Amanda, teach at their home studio, Point Reyes Yoga, in Northern California.

What listeners say about Spiritual Graffiti

An inspiring, passionate and well-read story!

I have felt less alone and more motivated.
The story is real as well as the emotions flattering throught the air.
Good job!

Listerned to it all in one go, found it very relaxing, was my fist audio book, made me think of my own path.

What a crazy adventure!

I met MC Yogi at the 2017 Floyd Yoga Jam and he just blew me away. He is so charismatic, down-to-earth, and funny. His yoga class was my favorite by far. The way he makes everyone, even strangers, feel like family is a lesson to live by. And his music makes yoga so fun! And to experience it all in person? Definitely!

Anyway, during 1 of his classes, he told everyone he wrote a book, so of course I had to preorder it! Spiritual Graffiti was absolutely excellent! It's a quick read, maybe taking 4 or 5 hours, but every minute was engaging. It contains an unbelievable amount of detail and MC Yogi really paints the picture for you. I listened to the entire book in 1 sitting. I simply couldn't put it down! I laughed, I cried, and just sat in awe listening to his journey through life.

I'm so glad MC Yogi narrated his own book, as he really gets the intended emotions in there and it was like he was right here telling me the story in person. You can definitely tell this book meant a lot to him. Such an interesting life! If you're into yoga or the spiritual life style or simply looking for a good read about a young man's journey through life, then I can't recommend this book enough! Even though I just finished it, I'm about to read it again! A+++++++

I think I remember him saying that the physical copy of the book contains some of his art work and maybe some music? So make sure to check that out too. I'll be getting a phyical copy soon!

I saw Mc Yogi at a yoga music festival in Indiana about 7 years ago. I loved his message and the energy during the show. I downloaded a bunch of his songs after that show. I am a middle and high school teacher. I found his songs could be used in my classroom. His song “Son of Shiva” is the story of Ganesh. Which was a great way to surprise the kids but also connect with him.
His story is inspirational and shows us all we all stronger than we think we are.
Thank for sharing your story.

Honest. Fun. Vulnerable. Inspiring. These are the words that come to mind when I think of MC Yogi’s Spiritual Graffiti. I’ve considered MC Yogi a teacher and mentor from afar and have always appreciated how he’s taken the “intimidation” out of yoga; Spiritual Graffiti makes me feel even more connected to him. It’s honest and gritty and human and makes me want to study harder, practice more and broaden my yogic path. It was like bumping into an old friend at a coffee shop, losing track of time and not minding one bit.

Riveting! Loved it! Emotional, inspiring and entertaining! A story that tousches and inspires and represents a beacon of light for humanity! I read it all in one sitting!

A must read/ listen

This is for anyone who is struggling to find their light!

Thank you for lighting the fire, MC Yogi!

Im a long time fan of mc yogi! I was surfing in Malibu back in 2009 and an awesome lifeguard yogi first introduced me to mc yogi. The lifeguard, Greg Phiefer, noticed my Ganesh tattoo on my side and asked if I knew the song “Ganesh is Fresh” and obviously I looked it up later. As a long time lover of hip hop and yoga I was super surprised I hadn’t heard of him before. I absolutely loved his music. All these years later and I still follow mc yogi but I have fell out of touch with my true loves, surfing and writing and yoga. I finally bought this book and I’m so happy I did. What an incredible journey it has been for mc yogi and his wife Amanda. This book was truly so inspiring to me and literally brought me to tears almost every chapter. I recommend this book to everyone interested in mc yogi’s life and journey, also and especially to young readers. I would love to see this as a required read for ALL 8th graders! I know I would have greatly benefited from reading this book in my youth. I loved listening to it on audible (super helpful bc I have 2 young kids) super easy to listen to and follow along. I loved the “voice” and “tone” of this book! And truly it has lit a fire inside of me! Once again ha! Thank you mc yogi for writing this book and sharing some of your most intimate moments and epiphanies and lessons you have learned... and what yoga has done in/for your life, wow! I greatly appreciate it. -Lauralee Lewis

A rousing and inspiring tale

A heartfelt tale of the artist's journey from crisis and troubled youth to finding liberation and love. MC Yogis earthy voice carries you through the story with energy and soul, the same good juju he brings to his music. Highly recommended!

it's fun to listen to and a great story! it was hard to stop once started.

A moving and magical tale

I really loved hearing the story of MC Yogi's journey. Both his live performances and audio book have been so enjoyable, keeping my attention throughout. Hearing how gracefully he moved beyond struggle and how being in tune to spirit manifested such a fulfilling life gives me hope.

The very personal story of a young man who rises above a troubled childhood to become a world wide recognized yoga teacher and spiritual rapper.
I especially enjoyed the author's reading ... his voice has a musical depth to it.