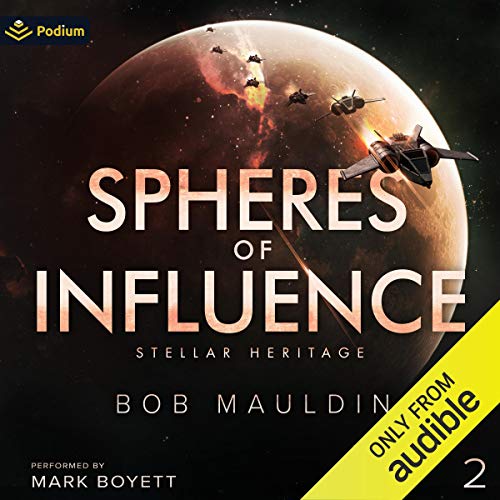 By: Bob Mauldin
Narrated by: Mark Boyett
Try for £0.00

After the events at Camp David, the Terran Alliance faces a crossroads - act upon this tragedy and start a war, or refrain and change the course of history.

The choice is not easy. The incident leaves a young captain, Lucy Grimes, in full control of the Alliance, thrust against her will into leadership of the most powerful organization known to man.

As the Terran Alliance grows in size and strength, there are those both on Earth and off who see this as a direct threat. While the Alliance endeavors to defend its home world from all enemies, both foreign and domestic, they soon find that this fledgling organization isn’t going down without a fight.

An alien civilization known as the Korvil has captured two humans and are torturing them to learn more about this new enemy. Things suddenly shift when the Shiravi - dubbed the Builders - mount a daring attack on a Korvil ship that results in their rescue. The events this sets into motion will change the frontier of the galaxy for generations to come....

What listeners say about Spheres of Influence

Really good series so far. Definitely a favourite. Can't wait for the next book.

first book I loved this book is way of course from the last book.also the fact everyone in a position of power is a women and every villain is a man .there are of course men in this but they are very much shown to be under a women's heel and all men have to agree with the women or are proved wrong or are the bad guys..in days of promoting equlity this book is way off the mark

First and foremost- the overall plot is interesting enough that most should be able to get past the relatively minor, but numerous, flaws.

The series in general so far, though this book was a bit better about it, comes off as suuuuuper preachy about a number of things, only to have the plot throat punch any and all of their preaching. Gender equality? The characters never shut up about it and make it somewhat of a point to have a damn near matriarchal top leadership group.. until literally anything bad happens at which point they all go either have breakdowns or make terrible decisions and get people killed.. then have a breakdown or have to recover from injuries. The military, government secrecy, government control over its citizens? All of that is *terrible* and of course all of that is *evil* and can't possibly be trusted.. hey let's build a new nation that is basically nothing but a military, but ignore evil military policies and training practices so that a bunch of people die before we start implementing those evil military policies and practices. Oh, and weapons, anything that could possibly make weapons, propulsion, shields, AM power, communications tech, basically everything but food replicators, solar panels, ecoscrubbers, and plastics are to be kept secret *obviously*. "Open to everyone worldwide of any nation, creed, race, religion, blah blah"... so long as you speak English.. and you're basically handed officer rank if you know anyone in the Denver area.

The tech, consistency, and reality is.. not quite right either. For FTL, a ship accelerates up to c, then gooses the power a bit to get into FTL, then seems to lose all inertia when they cut the engines. Oh, and the whole acceleration up to "a hair under" c isn't effected by relativity for.. reasons?

The weirdest thing about the tech side if things though is that the internet seems to not exist and any and all computers (alien and ~2015ish humanity alike) seem to only be able to perform limited, specific functions as needed. Did you ever read any of Asimov's late work from the 80's? Where he switched from atomic everything strapped to fancy 50's space planes to having his characters shocked at how the new fangled ship computer could do all of the jump math without the pilot having to pull out one single slide rule? It's like that. In 2015. Written (presumably) after 2010. They have.. and talk about suspiciously often.. mountains of paper, printed manuals, magazines, etc. and "don't think humans will ever be able to get away from having stacks of files everywhere". They run a *physical mail service* between the belt and earth, and orbit and the surface. **The hyper advanced interstellar aliens whose ships have organic computers seem to use paper for all data/communication/correspondence to the point that the leader's correspondence is identifiable by the fancy blue ink she prefers.** Seriously. No one has heard of the internet, wireless data, encryption, or, hell, even cell phones really given the number of times references are made to leaving messages with spouses, secretaries, offices, whatever.

But yeah. the issues aren't *huge*, just numerous and persistent. It should be bearable for most.

... does not disappoint as the story continues

I still think that Mark B has problems keeping all of the characters recognizable from each other as the other races are introduced. This makes it hard to distinguish who is who and makes me have to backup often to catch who said what. Regardless, this is still a great series and backing up is a minor inconvenience and sometime helps me get clarification of what is actually happening.

the first in this book series left me with bad taste in my mouth. it had intentional misogyny that made me uncomfortable. but I could tell the author put it there for a reason, the author is in no way a misogynist but it seems to be written in a way to make you uncomfortable. this book does the same thing but with the constant neglect of normal space Opera tropes and lots of unnecessary exposition. there's one section of the book I believe it's chapter 15 that can be completely skipped it is a long and drawn out story about the ideal American family which just doesn't exist in real life and it's a strange and weird chapter that could be completely left out of the book. otherwise this is fairly decent you're not going to be upset if you get it. but be warned it was obviously written well before 2020 and it doesn't conform to many of the space Opera ideas that you're used to in this genre.

Loved both the story and Mark Boyett is one of my favorite narrators.
This looks to be a good multi-book space opera...
Come on Audible -- I am waiting on the next two books...

I'm looking forward to the next book. I can't wait for it to come out

if anything, the narration by Mark Boyett is better than in the first book. At this time the Audible version of the 3rd & 4th books is not available. I really enjoyed “Spheres of Influence,” & was actually reading the start of #3 while listening to the end here. It worked! Makes me feel smarter in my old age. By Rick Lightbody March 24, ‘21.

I found this book well written and fun, if I had a complaint it would be that the author recaps the story a lot (a little too much).

this is a great story. flows nice. it grabs ahold of you from start to finish

Having read all of the books of this series a few years ago, l was looking forward to downloading the audio book as well. I have enjoyed it, but like a few other series that I love. I think having two people reading the words would have been a good thing. l recommend the book and the series. lt was a shame that we have lost the author, who was called to join out in space before his time.

Simon is not dead!

This not really a review more of a bonus! I almost didn’t start this book because I was so mad/sad that the main character was killed at the end of the first book. I have only listen to the first few chapters but so far it’s good and I’m glad started it