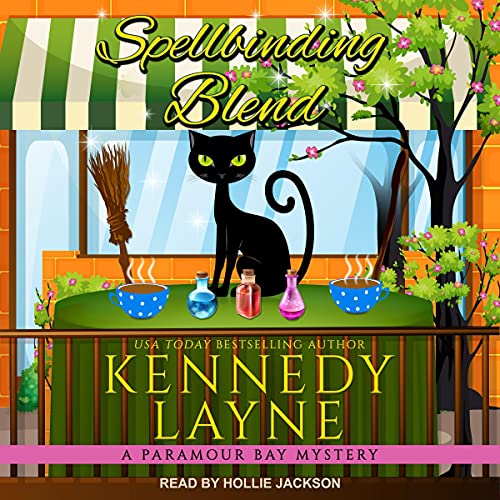 By: Kennedy Layne
Narrated by: Hollie Jackson
Try for £0.00

This is one spellbinding tale of magical chaos you won't want to miss in the continuation of USA Today best-selling author Kennedy Layne's cozy paranormal mystery series....

The flowers are in bloom, the songbirds are singing, and the tourists have begun to flock to the small coastal town of Paramour Bay for the Spring Festival. All is going according to plan, but Raven Marigold has one itsy-bitsy loose end to tie up regarding a possible warlock posing as one of the townsfolk. There has to be a simple solution, right?

Well, one itsy-bitsy loose end turns into two...maybe three...when a body is found behind the kissing booth at the traveling carnival on the edge of town. When Raven discovers a connection between the victim and the warlock she's been keeping a close eye on, she and her trusty familiar will have no choice but to take the case. After all, it wouldn't do to have the residents know that magic exists!

Grab a ticket and take a ride on this swirling mystery that will leave you dizzy with misleading clues, magical chaos, and a spellbinding blend that doesn't quite go according to plan!

What listeners say about Spellbinding Blend

I enjoyed this volume slightly more while continuing to run into the same struggles with narration. There was not as many fourth wall breaks as last time which I was thankful for but the fact that Raven's cat familiar Liam can hear her thoughts makes dialogue confusing. In fact EVERY magic users can hear Liam talking so there are often times where I have no idea who is talking aloud or is sharing internal monologue. Add to this that the narrator does not have a large range of voices so many characters sound the same, as well as Liam the cat is close in name to Leo, Raven's love interest, things get complicated at times. Overall this was a quick listen with a fun fairground mystery. The author continues to ramp up tension around Raven having to hide her magical abilities from her very non-magical boyfriend. I enjoyed some more reveals around Raven's family and community but consistently feel that this character and world development is painfully meager and small with each volume so stories can feel very broad and overview rather than fully fleshed out and immersive. I enjoy the potential of this world and characters so I keep coming back but hope for more every time. If you have liked what you have listened to this is the same quality if you are hoping for a big step up from the prior volumes I would not get your hopes up but it is still worth an afternoon listen.