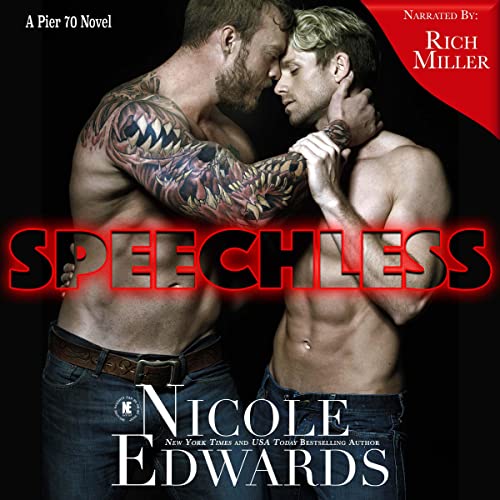 By: Nicole Edwards
Narrated by: Rich Miller
Try for £0.00

He’s suffering in silence....
Teague Carter, one of the four owners of Pier 70 Marina, has spent his life feeling rejected. To the point that he has never allowed himself to get close to anyone. He prefers it that way, in fact. But he refuses to believe that his destructive behavior might be something more than rebellion.

He’s unable to speak....
Hudson Ballard, Pier 70’s mechanic, has been fighting his attraction to Teague for years. He has stood by and watched the kid get more and more out of control, but this time is the last. If Teague wants to use sex to escape his problems, Hudson is certainly willing to be the one to show him that he’s good with more than just his hands.

Sometimes, words aren’t necessary.
There are fireworks when this out-of-control bad boy agrees to no strings with this tatted up, dominating mechanic.

Can Teague and Hudson keep their emotions from getting involved in their arrangement? Or - thanks to the demons from their pasts - will the darkness steal from them before they have a chance?

What listeners say about Speechless

Hudson has been my favorite character since book one. Teague is annoying so I don’t mind the age gap between the two men because it helps balance all of the emotions out.

Teaks life has been hard so after you find out why he is how he is, the patients Hudson shows is amazing. But you will also do a lot for the people you love. It’s clear Hudson has always had some feelings for Teague, I’m just glad Teague got his head out of his behind.

Dealing with topics of suicide and depression in this book was done well and gives a very small bit of insight into someone who is suffering. The enduring love Hudson shows Teague is remarkable.

After having read all the books in the series, Hudson and tea are still my favorite couple to reread and now listen to.

I feel like I have been waiting for this Audiobook forever! I read this story years ago. One of my top 10 love stories ever! This Audio version blew me away! The narrator was perfect for Hudson who has been mute since birth. He is so reflective in his voice as Hudson when he is trying figure out Teague and his feelings for Teague.. and how to deal with Teague and said feelings!!! I felt like I was inside Hudson's head.. My favorite parts though were when he narrated Teague having a FIT!!.. "Big Giant A*Hole"!! LMAO!!! This is the story of two guys who work together at a Marina in the repair shop. Hudson - a Large Guy who is Mute but is a Tough but Big Sweetheart.. and Teague a smaller guy who has a lot of Mood swings! You will fall hard for both of these guys! The cover models are SPOT on!! You need to Listen to this!! I am so Happy!