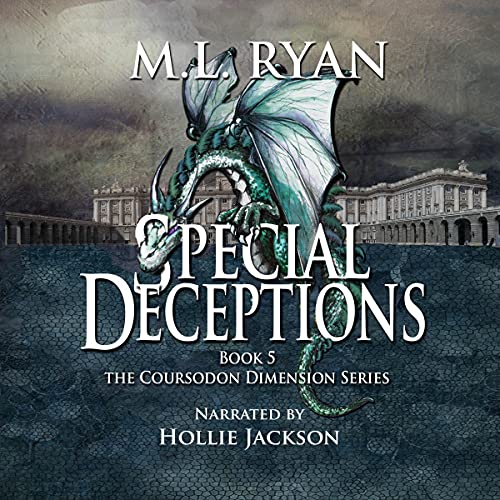 Still reeling over his brother's death, Alex reluctantly assumes his new role as crown prince of Alenquai. Meanwhile, Hailey finds the constraints of life as his fiancée, well, constraining. Along with a lack of privacy and the grueling demands of a humorless protocol aid, her future mother-in-law just might be trying to drive a wedge between the not-so-happy couple. If that isn't bad enough, something more sinister is afoot, forcing Alex and Hailey to put aside their differences to solve a ruinous mystery.

What listeners say about Special Deceptions

Anyone who knows me knows that I am head over heels in love with the Coursodon Dimension series. I'm always trying to get others to read or listen to it. From the very first novel to the sixth (which isn't in audio yet), one can count on humor, snark, evil magic dudes, and Hailey dealing with knowing about different dimensions other humans do not.

While it is difficult to add to perfection, Hollie Jackson takes ML Ryan's works and makes them even better (How does she do this?) While some of the voices of characters from other books became a little bland in this one (Rachel especially - her squeaky voice seemed to go to Hailey's maid) - but that happens in most series. It's got to be difficult for a narrator to remember each voice perfectly - there's always at least one character voice per book that I love more than the others. In Special Deceptions, it was Pixie. I'd read the book before and had a slightly annoying voice in my head but Hollie took Pixie, Hailey's PA, and gave him a voice that was PERFECT! So much so that I wished him to show up constantly.

While usually Coursodon stories get an auto 5 star, this one didn't quite reach that peak. It was the same in book form. Too many twists and turns, too many plot points, and yet it had a difficult time holding my attention, and then the surprise murderer popping up toward the end. That said, I still enjoyed it and will relisten (not to mention reread) for years to come.

If you love the Coursodon Dimension, this is a must add to your collection. If you've never heard of it - start with book 1: Special Offers. It's fantastic and each book adds to the universe this author has built.

For those who love urban fantasy with a little romance, quirky fun characters, and our protagonist for whom snark is her first language, this series is definitely for you. Be prepared to fall in love with this series.