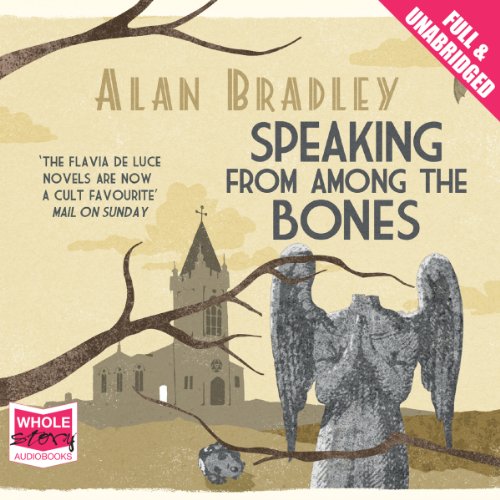 Speaking From Among the Bones

By: Alan Bradley
Narrated by: Sophie Aldred
Try for £0.00

The villagers of Bishop’s Lacey are holding their collective breath as St Tancred’s tomb in the local church is about to be opened after five hundred years. Inveterate eleven-year-old sleuth Flavia de Luce is first at the scene, but the body she finds lying there is not that of a desiccated saint; it is Mr Collicutt, St Tancred's celebrated organist.

What listeners say about Speaking From Among the Bones

Would you consider the audio edition of Speaking From Among the Bones to be better than the print version?

I love this whole series of books. The main character (and narrator) is a wonderfully enjoyable creation.This audio edition does Flavia justice! Flavia is 10 years old and both vulnerable and tough as old boots. Hugely intelligent and mentally tough,sometimes frighteningly ruthless in her methods, yet touchingly innocent in some ways. Funny,intrepid,insightful but sometimes outrageous especially when investigating murder.She is unstoppable.

Love the setting , the crumbling stately home, the villagers, the period (early 1950s), the family and the laugh out loud inner thoughts of Flavia.. All these books are very funny because of the relationships between the characters and their various idiosyncrasies. The relationship of Flavia and her sisters is both difficult and close.

Which character – as performed by Sophie Aldred – was your favourite?

Flavia - wonderful character,perfectly portrayed by Sophie Aldred. Love all the characters , the De Luce family , Dogger and The Mullets, the long-suffering Inspector Hewitt and his men. The relationship of the three sisters. Flavia's reliance on and love for ( though she would never call it that) the troubled Dogger.

There are passages in these books when Flavia's razor sharp brain and ruthless quest for a murderer are suspended and you see the vulnerable child beneath the intelligence.

Please can we have the about to be published 'Thrice The Brinded Cat Hath Mew'd' in audiobook form ASAP - preferably read by Sophie Aldred?

This episode is rather light on material for the usual epic tale from Alan Bradley but nonetheless enjoyable and provides continuity to the series of young Flavia's detecting and chemistry adventures. I get the sense this book was a filler, laying the groundwork for what is to come.

Would you try another book written by Alan Bradley or narrated by Sophie Aldred?

With this story Alan Bradley is well into his Flavia de Luce series. With royalties flowing in he (and his editors) must have felt no need to maintain the continuity of the background of the de Luce family who despite being Catholic seem to have allowed their youngest to be baptised by an Anglican vicar in this book, then, shortly after, claim to be Catholic again. Make your mind up Alan, you're hardly recreating Brideshead Revisited. Also, why are they still skint despite finding a priceless Folio edition of Romeo and Juliet in their library in the last book? As well as these, there are a variety of historical linguistic incongruities that have, by this stage in the series, started to grate.
There is a weird trait amongst narrators in general, including Sophie Aldred, to portray all lower class characters with a myriad of 'yokel' voices ranging from Northumberland to Penzance despite the fact that most of them would have grown up in the same village. Ignoring this small annoyance, Ms Aldred's jaunty rendering of the novel actually makes it MORE palatable than the printed version.

Would you ever listen to anything by Alan Bradley again?

The stories are lively, what you might call easy listening, but the flaws in the plot, background and historical details are definitely starting to set my teeth on edge.

Have you listened to any of Sophie Aldred’s other performances? How does this one compare?

Sophie Aldred's lively, prim and child-like voice does pay homage to the upper-crust a half century ago and does, I think, make these books more enjoyable and help smooth over the incongruities of the novel.

Providing a proper researcher went through script with a fine tooth comb, then possibly.

I'm surprised these books got through an editor's hawk-like gaze with is many historical clangers still in place.

Didn't Realise It Was A Children's Book

Would have been helpful if there were some indication that this book is aimed at the Junior market before buying. However, it was well performed and the plot good. It's just I hated the child detective, Flavia, and found her precocity irritating! Not for me, maybe when I was about 10.