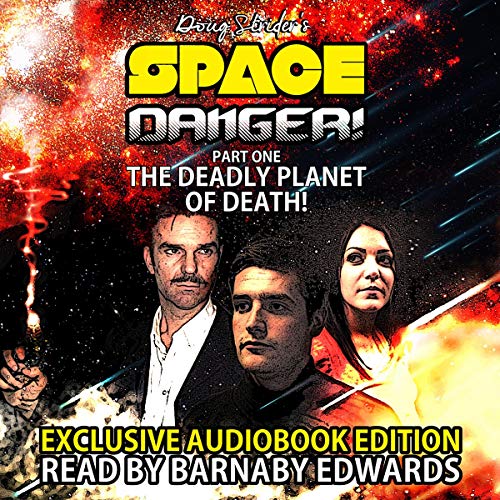 Space Danger! Part One: The Deadly Planet Of Death

Space Danger! Part One: The Deadly Planet Of Death

Join the Space Navy. Life expectancy is debatable but the perks are minimal.

The crew of HMSS Monstro have been given a mission, a very BIG mission. If they could only get around to it then the galaxy might be a safer place to live. Safer and, quite importantly, still existing.

The latest addition to the crew likes existing and is determined to carry on doing it as much as possible but no one is going to make it easy for him, least of all himself.

Read by renowned audiobook performer Barnaby Edwards (Doctor Who, Big Finish) and written by Doug Strider, this is the first in a four-part series.

Would you consider the audio edition of Space Danger! Part One: The Deadly Planet Of Death to be better than the print version?

Yes, the audio edition is definitely better. I think I wouldn't have really fallen into the story itself if I just read the print version. It doesn't mean that the story isn't interesting - it's rather fun and exciting actually - but the best part of Space Danger is the narrator's performance and the sound design.

I love Brit-Wit, so I was expecting something amusing and thought-provoking..

What could Doug Strider have done to make this a more enjoyable book for you?

Made it funny or thought-provoking, like Douglas Adams, rather than dull and negative.

Would you be willing to try another one of Barnaby Edwards’s performances?

No. His voice was almost as if a tape of his performance was being played at too low/slow a speed.

If you're looking for amusing British SciFi, try Douglas Adams or My First Planet or The Spaceship

If you could sum up Space Danger! Part One: The Deadly Planet Of Death in three words, what would they be?

What other book might you compare Space Danger! Part One: The Deadly Planet Of Death to and why?

This book is somewhat similar to Red Dwarf in terms of British accents, humorous dialogue, emphasis on widespread booze consumption in key parts of the story, feline characters and milk toast junior officers who, over the course of the story, go from zero to hero.

Magisterial. Barnaby Edwards is a narrator of the first water. Each character's voice was unique. He even threw in a quality rendition of what cat people and aliens probably sound like, if they could talk.

Join us and see how the Munstro's Artificial Intelligence quenches her obsessive thirst to be Captain Dangler's submissive e-slave as she begs him to download his humungous hard drive deep into all of her ports over and over and over.

This audiobook won't exactly unravel the mysteries of the cosmos, nor will it get you any closer to that MENSA membership, but you will laugh at least 27 times and maybe forget about that nagging "life crisis" du jour that has you by the stones. Drop a couple dimes, get the audiobook and just relax for a couple of hours. You deserve it.