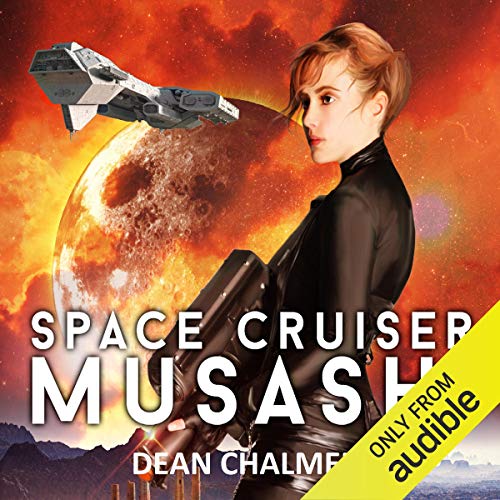 By: Dean Chalmers
Narrated by: Craig Jessen
Try for £0.00

A sexy, explosive space opera.... A battered starship is reborn as the galaxy's greatest weapon vs. a horde of armored transhuman warriors...The RCS Musashi is an antique ship - a last-chance posting for the unmotivated and undisciplined in the Fleet. But their captain, aging war hero Harrison Kane, believes that his crew of misfits can summon their talents to become the very best.

A disgraced XO...the insubordinate bad-girl helmsman who pursues her...an arrogant and possibly psychotic telepath...an engineer who relates emotionally only to machines...a genetically engineered Marine Sergeant who strives to become a samurai warrior...They will have to band together to stop the Valorian threat...And stand together even when their own government stoops to betray them to appease the enemy.

The author needed a way to bring Miyamoto Musashi's "Book of Five Rings", gay sex, civil rights and military sci-fi together into one package. So he had the central warship in the book named after the Japanese battleship MUSASHI, and then tosses in the other ingredients and shakes vigorously. Some folks will be turned off, but it does work rather well. Not familiar with Mr. Jessen's previous work, but enjoyed his narration.

The book starts off a little rough but after a few chapters in comes around. I wish authors had enough confidence that they didn't have to throw in sex scenes that didn't add anything to the story.

Did not care for the story.

I want my time and money back..... I just didn't enjoy this story. I love this kind is science fiction but I just did not care for the story and plot.

Absolutely hated it. Couldn't get into it at all. I never gave up on a book before this one.

Kept me wanting to read more.

Loved it. All the different misfits were interesting. I really loved the man who held a connect to the machines and systems.

What did you love best about Space Cruiser Musashi?

It's a classic gang-of-misfits brought together to be a family. I wish the characterization had gone a little more in depth (not sure if this is the first book of a longer series?), but all in all I really enjoyed the space opera adventure.

What does Craig Jessen bring to the story that you wouldn’t experience if you just read the book?

On the page some of the characters are under-developed, so the voice acting gave me a deeper sense of who they were. I particularly liked the voices for Sooter and Sivareck, which made interesting yin-yang counterpoints in Engineering.