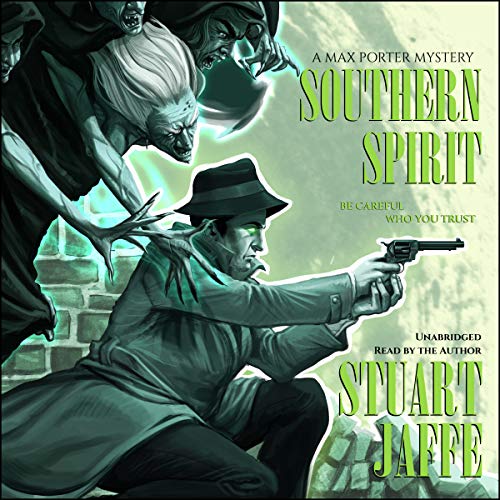 Max Porter has had his share of odd cases. That goes with the territory when one of your partners is the ghost of a 1940s detective. But the idea of being hired by a witch coven to save witches seems wrong from the start, and it only gets worse.

It's bad enough Max can’t trust anything his clients say, but his own wife is being lured closer into becoming a real witch - something that terrifies Max and sows distrust. Add to that a mysterious group of witch hunters, a long dead curse brought back to cause havoc, and power players in the shadows, and it’s no wonder the Porter Agency is stretched to the breaking point.

Between fighting their enemies and fighting each other, this may end up the toughest case of their lives - one that could alter the balance of power among all witches for years to come.

What listeners say about Southern Spirit

love this series!! i really like how the couple is developing but Drummond is the best!!

I appreciate the author reading it himself. Made it much better sense he knew the characteristics of the players. The story isn’t fair to witches. They’re not all bad.

I am hooked on this series and characters

The author weaves history and fiction together in a wonderful tapestry. His narration is the bonus. I am lucky to live within driving distance of the story locations and will definitely be visiting them soon.