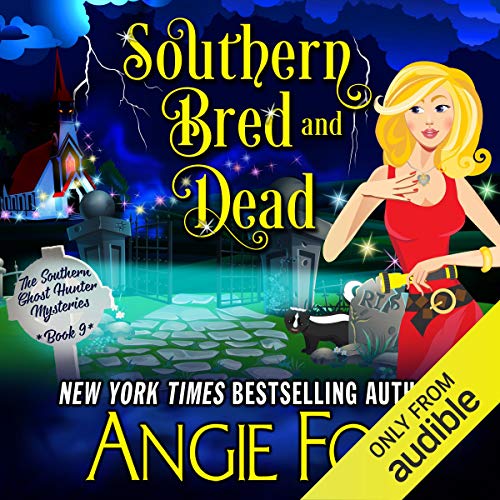 A haunted church. A ghastly death. Can Verity clear up the case before she’s buried way over her head?

Verity Long would really like a day off. Between uncovering the culprit who capped her gangster ghost housemate and dodging the bomb her boyfriend just dropped on their relationship, her spiritual calling has gotten complicated. But when she steps out for a little fun at a church fundraiser, she has another mystery on her hands when a family friend plunges from the bell tower.

With her pet skunk and a spectral mobster buddy in tow, Verity charges back into the world of furious phantoms. But as she follows a shocking trail of clues through a dangerous speakeasy, a possessed movie theatre, and a spooky mob safehouse, she could end up sleeping with the ghostly fishes.

Can Verity lay everything to rest before a mysterious murderer reads her last rites?

What listeners say about Southern Bred and Dead

This is one of my favorite series. The writing pulls you into the storyline. I would recommend it to anyone.

Loved it. We finally get to know why Frankie's brother shot him. Lots of twists and surprises in book nine of the series . I reccomend this book. Excellent narration.

This is one of my favorite, go-to, don't-even-need-to-read-the-synopsis-just-shush-and-take-my-money, series, and this was the best one yet!. Tavia Gilbert does an exceptional job of voicing the characters - I can't imagine anyone else's voice for my favorite character, Frankie the German. I impatiently await the next in the series.