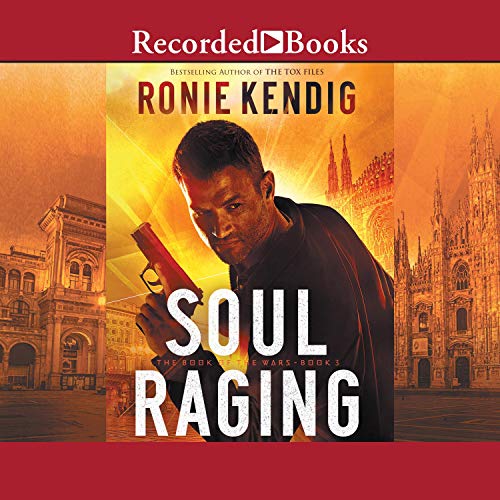 Sometimes, the only hope is the enemy.

Leif Metcalfe is done waiting for answers and seizes control, a move that comes with a high price and a deadly risk: teaming up with the enemy. He can only hope that what he uncovers will heal the wounds he's inflicted on those he loves.

Iskra Todorova believes Leif is on a collision course with death and knows firsthand the irrevocable cost of that path to the soul. While trying to protect her daughter and intervene with Leif, Iskra is forced to set her sights on the man behind the evil organization ArC - Ciro Veratti.

Torn apart by injuries and opposing views on how to handle Leif's act of treachery, team Reaper hunts one of their own. The only thing they agree on is not stopping but starting the final battle prophesied in the Book of the Wars.

What listeners say about Soul Raging

Ronie Kendig finishes out her Book of the Wars series with Soul Raging, and wow! Just wow! First, how Kendig still shocks me after spending time in three books with team Reaper is both remarkable and satisfying. As they hunt down ArC while dealing with the repercussions of one of their own turning on them, twist, turns, and downright loop de loops kept me turning the pages as fast as I could. Not only is Soul Raging an epic conclusion to a fantastic series filled with action, suspense, and a just the right touch of romance, it digs deeper. It’s a story about what’s happening behind the façade and loyalty. I’ve now spent three books with these characters (well, a little more with a few of them since they were also in The Tox Files series), and they continue to stand out. They’re brave, loyal, fierce, strong, and memorable. In conclusion, take a deep breath, hang on tight, and enjoy the ride.