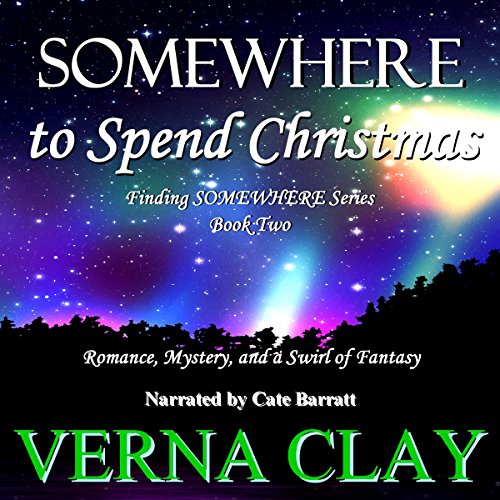 Nestled in a cove on Oregon's coastline, the town of Somewhere is charming, picturesque, inhabited by townsfolk who love their community - and teeming with mystery. You are invited to join the heroes and heroines of Somewhere as they solve mysteries, discover romance, experience inexplicable phenomena, and fight injustice...just the usual stuff!

Is there somewhere that wishes come true?

When the bus Sunny Fairbanks is traveling on stops for a layover in the small seaside town of Somewhere, she decides to walk on the beach at sunrise - and falls in love with the area. Her decision to remain in Somewhere for a few days is solidified when she steps on a shard of glass. A young man jogging along the shoreline comes to her aid, and she is forced to do something she hates - accept help.

Vicky Patterson continues to be amazed that her brother was able to send her a message from beyond the grave through her friends Faith Bennison and Baxter Hope. And that message has set her free from a lifetime of guilt. In fact, she's so free that she takes on the task of heading up a group of protesters against Wainwright Resorts, the corporation that wants to purchase a portion of the town's public beach and build a world class resort that will, of course, destroy the quaintness of her community. She's angry with Michael Wainwright, III, and intent on stopping his plans.

Gabby Hope, a widow and owner of Hope Bed & Breakfast, wants to get Leo Constanzo, a widower, out of her system, so she proposes something utterly inappropriate and is shocked when he agrees.

Belinda Hope, who died decades earlier, kept a diary that revealed the happenings behind her daughter's disappearance, and then her own, years later. Now that she's ready to step into the light of eternity, she needs to get a message to someone on the other side about where the diary is hidden.

What listeners say about Somewhere to Spend Christmas

What did you like most about Somewhere to Spend Christmas?

I liked everything about this story

I don't want to give anything of the story away, but when Belinda's diary ends up the the correct hands, opening the path to the next book. 🌹

I was given this book free for an honest review

Several heartwarming romances in one story........

Somewhere to Spend Christmas is the second in the series, and I think these books are best read as part of the series. There are several overall story arcs that would be confusing without the foundation of book one. I continue to be amazed at how well this author weaves together seemingly disparate story threads into a cohesive plot. In this book, the author introduces two new love stories, one with a couple in their middle years and the other with teenagers. At the same time, she continues a love story started in the first book between two people in their 60's. I found each of the couples to be equally compelling, and I was completely invested in all of them reaching an HEA together. Of course, one of the couples is really fighting hard against succumbing to the love bug, so that will probably be continued into book three. This book made me feel the full range of emotions from irritation to sadness to happy tears, but it was actually a fairly low angst level story. The author throws in an intriguing mystery, a visit from a ghost or two and plenty of quirky characters, all of which make me anxious to return to Somewhere, Oregon, soon.

Cate Barratt does a superb job with the narration. She narrates the first book in the series, so it is great to have that continuity. Her delivery is flawless, she differentiates well between characters, and she always uses the right tone for the current mood of the story.

The second book did not disappoint

I love these books.I want to live in Somewhere!Cate Barratt was the perfect narrator.I was given this book by the narrator,author or publisher free for an honest review.

Verna Clay is a wonderful writer. This story continues from book 1, but it definitely stands alone. I love books that continue, but not necessary to read the past books. It is like catching up with an old friend. haha I was so glad that Michael finally won over Vicky! oops...hope that isn't a spoiler for some. (I got excited). Now, if we could just get Gabby and Leo straightened out! Book 3, here I come!
Cate Barratt is a fine narrator. I still thing, as I did for book 1, that her voice is too mature for the characters, but, considering the age of Gabby, maybe that won't bother me as much for book 3. She does a great job of narration in the timber, cadence and characters and I found zero distraction, which is always good.
I am definitely enjoying this series!