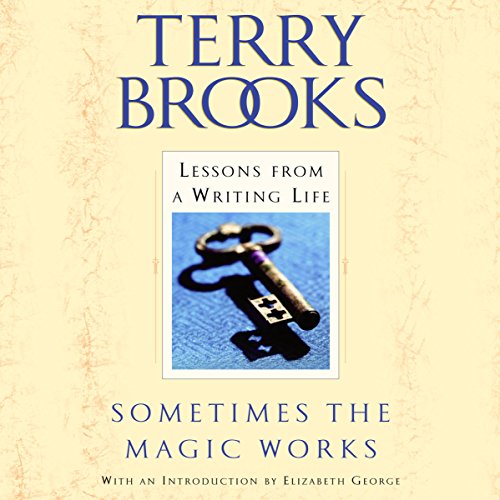 By: Terry Brooks
Narrated by: Dan Woren,Kimberly Farr
Try for £0.00

In Sometimes the Magic Works, New York Times best-selling author Terry Brooks shares his secrets for creating unusual, memorable fiction. Spanning topics from the importance of daydreaming to the necessity of writing an outline, from the fine art of showing instead of merely telling to creating believable characters who make readers care what happens to them, Brooks draws upon his own experiences, hard lessons learned, and delightful discoveries made in creating the beloved Shannara and Magic Kingdom of Landover series, The Word and The Void trilogy, and the best-selling Star Wars novel The Phantom Menace.

In addition to being a writing guide, Sometimes the Magic Works is Terry Brooks's self-portrait of the artist. "If you don't think there is magic in writing, you probably won't write anything magical," says Brooks. This book offers a rare opportunity to peer into the mind of (and learn a trick or two from) one of fantasy fiction's preeminent magicians.

“Terry Brooks is adamant about dedicating oneself to the craft, while showing awe and humility for the creative process.... Every serious writer should refer to this book regularly for inspiration as well as solid crafting advice.” (Elizabeth Engstrom Cratty, Director of Maui Writers Retreat)

“A marvelously pragmatic initiation to the art of writing.” (Dorothy Allison, author of Bastard Out of Carolina)

“[A] succinct and warmhearted autobiographical meditation on the writing life.” (Publishers Weekly)

What listeners say about Sometimes the Magic Works

My best guess is that Terry Brooks wanted to inspire writers to reach higher. he certainly inspired me. my wife died 8 months ago and I haven't really been able to write. I'm working on my 6th book finally. and I'm ready to record two others for audible. I might not have been able to get back without the magic. And I agree . . . Hunter rules!

I highly recommend both the life communicated in this book by both Terry and the excellent narrator.

I wish more writers did this

Did I learn anything that I had not heard before? In my career as a reader I have probably come across all the ideas in one place or another. But it is so fun to hear how an author experienced them. Stories about getting started are probably the most interesting for me. One thing I did not hear in his presentation is how other writers have influenced him (aside from Tolkien's gambit of not focusing on kings and gods). When I read Brooks I am often at a loss to find how he has built on the millennia before, someone whose style informs his. My final comment is that his grandson is right: you can see the whole world from those horses.