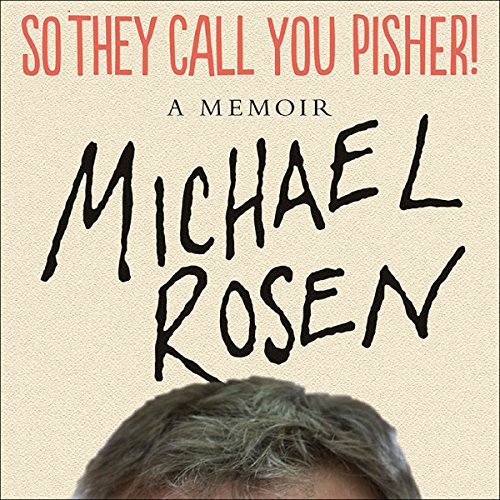 So They Call You Pisher!

The brilliant family memoir of the much-beloved poet and political campaigner.

In this hilarious, moving memoir, much-loved children's poet and political campaigner Michael Rosen recalls the first 23 years of his life. He was born in the North London suburbs, and his parents, Harold and Connie, both teachers, first met as teenage communists in the Jewish East End of the 1930s. The family home was filled with stories of relatives in London, the US, and France, and of those who had disappeared in Europe.

Different from other children, Rosen and his brother, Brian, grew up dreaming of a socialist revolution. Party meetings were held in the front room. Summers were for communist camping holidays. But it all changed after a trip to East Germany when, in 1957, his parents decided to leave the Party.

From that point, Michael followed his own journey of radical self-discovery: running away to Aldermaston to march against the bomb; writing and performing in experimental political theatre at Oxford; getting arrested during the 1968 movements.

The audiobook ends with a letter to his father and the revelation of a heartbreaking family secret.

What listeners say about So They Call You Pisher!

I really enjoyed listening to Michael Rosen's biography. I didn't want it to end. Highly recommended.

From bittersweet coming of age to incredibly moving research into his own family's devastation by the holocaust - a brilliant biography.

I really liked this book, though I didn’t expect to as I thought the subject matter may be a bit dry. Michael Rosen is such an engaging person, his own narration made me laugh out loud at times, loved his turn of phrase. What an amazing guy!

My Review Of So They Call You Pisher

I really enjoy Michael Rosen's stories, and this is a great extension to said stories!

Lovely recounting of experiences in time

loved the way Michael effortlessly reads his book with intonation that make it very interesting and a joy to listen to. The content is honest and of the time, I really enjoyed every listen!