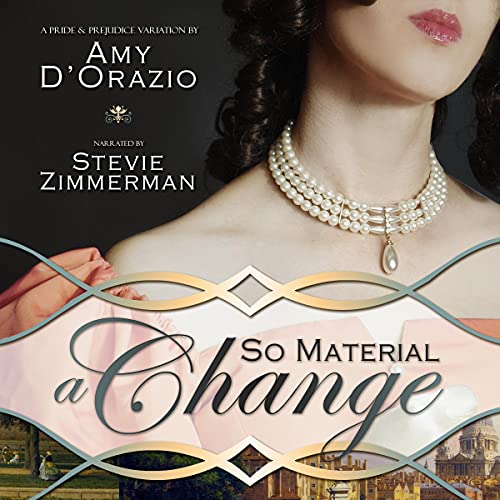 So Material a Change

By: Amy D'Orazio
Narrated by: Stevie Zimmerman
Try for £0.00

“If the thought of us being destined for one another is what caused you to laugh, then I shall laugh with you. Ours is more a story of mutual desperation than of love.”

Matrimony is the last thing on Elizabeth Bennet’s mind when she arrives at Netherfield Park to tend to her ill sister. When proud Mr. Darcy acts rashly to thwart a compromise and tells her that the entire household believes they are engaged, she dismisses him outright and refuses his offer of marriage.

But more surprises await her at Longbourn. Mr. Collins is ready with an offer of marriage, and it is not only her mother who thinks it a fine match; Mr. Bennet is willing to press the point until Elizabeth makes clear such a connection is impossible - because she has accepted an offer of marriage from Mr. Darcy.

It is an inauspicious beginning, an engagement neither desires, driven to by the machinations of others. Yet what begins as a forced alliance soon changes into something quite different. Will it be enough to lead them into love?

What listeners say about So Material a Change

The plot had a few of different subplots which were well written. The elder brother of Col Fitzwilliam was a brilliant addition and interesting character.

The conclusion was not rushed which was satisfying. You have a insight into married life for the Darcys for a couple of chapters at least.

The narrator voice was pleasant. However, the speed between key paragraphs where you moved through at time were treated as if you had just begun a new sentence and this was confusing when you had to adjust to a week ahead or an important event began to be described. Maybe this could reflect a fault with the author too but it is split into chapters. The last paragraph of the book did not need a new chapter but it again it needed a slight space to indicate a new paragraph from the previous paragraph. I would not let this prevent you from purchasing this book though. Do enjoy.

When Caroline Bingley’s desperation for the money and status of Mr Darcy, leads her to attempt a compromise, he is equally desperate to avoid marrying her.

So desperate, that he lies to his friend, Charles Bingley, claiming he is betrothed to Elizabeth Bennet, who happens to be visiting the house.

She has never liked Mr Darcy and refuses his officious proposal – “I find it necessary that we should marry!”

However, on returning to her home, she discovers that both of her parents are determined that she marry her cousin, Mr Collins.
He is the heir to her family’s estate, stupid and physically repellent. Elizabeth's only escape is to tell her father that she has accepted Mr Darcy.

From this beginning of an engagement to the least, worst option, Elizabeth and Darcy must try to carve out a happy future.

This is wonderful book with angst, passion, misunderstandings, love and acceptance.
Stevie Zimmerman does a wonderful job narrating.

I loved it. I really like all her books that I read, and I really enjoy stevie's voice ❤️

I think this is her best book yet.

I love everything Amy D'Orazio writes and the fact it is Stevie Zimmerman narrating makes it even better. THERE WILL BE SPOILERS BELOW **** BTW Lord Saye is in rare form in this book and the funniest he has ever been.

The story starts off with Caroline sneaking into Darcy's bed chamber and trying to seduce/compromise him. She gets into his bed and starts to touch him. Darcy thinks it is Elizabeth (as he has been dreaming about her) and then jumps up when he realizes it's Caroline. He quickly dresses (in another room with his Valet) and has someone wake up Bingly. Bingly sides with Caroline stating that even though she did it, he has to marry her anyway. Darcy panics and says he cannot because he is engaged to Elizabeth (who is staying at Netherfield tending to a sick Jane). The next day Darcy corners Elizabeth to tell her they have to marry. Elizabeth says no but then changes her mind when she finds out her father is pushing for her to marry Collins. The rest of the book is about the 2 of them learning about each other. There is some angst. This Elizabeth is more stable-minded and not quick to lose her temper and is a refreshing "Lizzy" to read. Darcy was really mean to her in some scenes and kind of an @ss at times. This book also brings back the character of Lord Saye who is in prime humor and is fabulous. The drinking scene with Darcy, him and Bingly and the card bet is beyond hilarious and I actually laughed out loud at sooooo many scenes. I bought the book and the Audible version and as soon as I was done, I started all over again. I have read over 200 P&P variations and this is EASILY one of my absolute favorites.