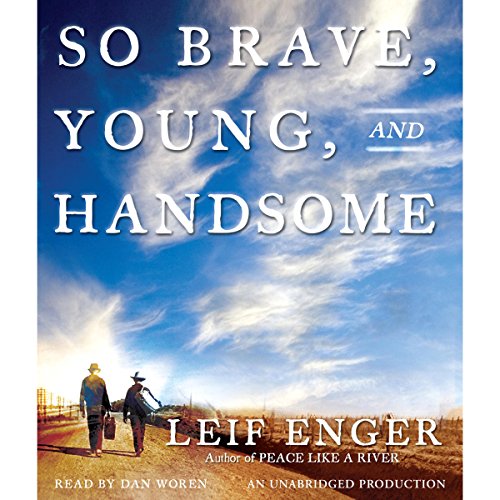 So Brave, Young, and Handsome

So Brave, Young, and Handsome

One of Time magazine's top-five novels of the year and a New York Timesbestseller, Leif Enger's first novel, Peace Like a River, captured listeners' hearts around the nation. His new novel is a stunning successor - a touching, nimble, and rugged story of an aging train robber on a quest to reconcile the claims of love and judgment on his life, and the failed writer who goes with him.

In 1915 Minnesota, Monte Becket has lost his sense of purpose. His only success long behind him, Monte lives a simple life with his loving wife and whipsmart son. But when he befriends outlaw Glendon Hale, a new world of opportunity and experience presents itself.

Glendon has spent years in obscurity, but the guilt he harbors for abandoning his wife, Blue, over two decades ago, has finally lured him from hiding. As the modern age marches swiftly forward, Glendon aims to travel back into his past - heading to California to seek Blue's forgiveness. Beguiled and inspired, Monte soon finds himself leaving behind his own family to embark for the unruly West with his fugitive guide - a journey that will test the depth of his loyalties, the inviolability of his morals, and the strength of his resolve.

As they flee from the relentless Charles Siringo, an ex-Pinkerton who's been hunting Glendon for years, Monte falls ever further from his family and the law, to be tempered by a fiery adventure from which he may never get home.

"Enger crafts scenes so rich you can smell the spilled whiskey and feel the grit." ( Publishers Weekly)

What made the experience of listening to So Brave, Young, and Handsome the most enjoyable?

The writing. Leif Enger writes beautifully, every sentence is well crafted and every phrase is just gorgeous.

What other book might you compare So Brave, Young, and Handsome to, and why?

His other book, "Peace like a River". Both are adventure yarns, both explore and blur the subtleties of what is good and what is bad, both make you feel like you're in unexplored territory and both are stunning.

A beautiful, evocative voice. You could imagine yourself being told this tale whilst sitting round a campfire in the Wild West.

A journey worth taking, a yarn worth hearing.

I read "Peace like a River" when it first came out and loved that book. It is in my current 10 best books I ever read. Ever since I finished I have been waiting for Leif to write me another book. How can any author live up to that much anticipation?

Well this book is not as good as "peace" and in the begining I was a little disapointed. But I got over it and I'm glad I did. I like this book, I won't put it in my Top 10, but I will and have already recommended the book to family and friends.

The story is interesting,with a good mix of charactors,action and adventure, love and hate. what more can a person ask for?

I am now waiting for Leif to write me another book, only this time I am looking forward to book that I will enjoy instead of wanting to be blown away.

This piece is not a river...but close

Peace Like A River now falls in my 10 best books of all time so it is hard to compare. As a story teller he is great, but the message is not quite as gripping, but I still would recommend it for pure readability.

Who Knew Reconciliation Could Be So Humorous?

What did you love best about So Brave, Young, and Handsome?

The wit of the author's prose and the depth of its meaning.

Which character – as performed by Dan Woren – was your favorite?

No favorites; loved them all. Learned something from each.

Who was the most memorable character of So Brave, Young, and Handsome and why?

Isn't this question a mite repetitive?

I dont get it

This was sort of a meandering louis lamore etc type of tale that I almost quit listening to before it ended. After it was over, I still don't know why I finished it. It just seemed to have no real point at all.

the narrator had a calm, pleasant voice which at times reminded me of Casey Kasems voice. the story was interesting but rambled a bit and got slow. all of the characters were interesting and you'll like some of them.

A Tale of Personal Redemption

Lief Enger wades into deep questions with the air of an amiable story teller. Payment for past offenses, forgiveness, integrity and the difficult path of restoring relationships are all presented in a way that avoids trite or simplistic resolution. The answers emerge slowly from the curious friendship of a writer and a wanted criminal.

The reader was perfect. A slow moving well written end of an era Western. Although not fast paced it was a great flowing book. worth your time.

Another beautifully written, entertaining story from Leif Enger. The narration was also well matched for this type of story.

I really enjoyed this book. Even more than Peace Like A River. I just re-listened to them back to back and hands down this one is my favorite. Though PLAR is no slouch. I just liked this story better.

Great Company on the Road

A wonderful story and an excellent reader(Dan Woren) made a 9 hour road trip seem like a little vacation in itself. We arrived at our destination with 15 minutes left in the novel and drove round and round until it was finished. Enjoyed the historical setting and loved the characters-especially Charlie Siringo. Syntax and dialogue is somewhat reminiscent of an episode from the HBO series "Deadwood", and adds to the atmosphere of the novel.