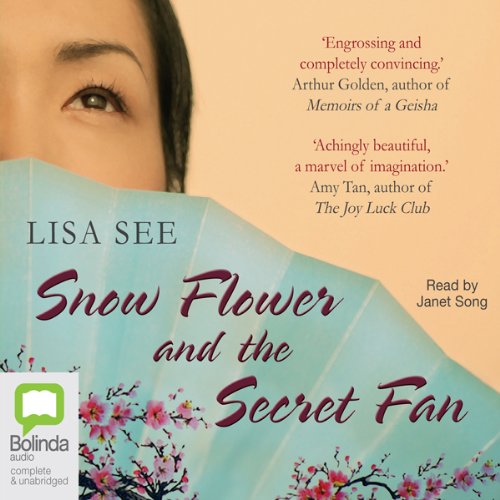 Snow Flower and the Secret Fan

Snow Flower and the Secret Fan

In 19th-century China, when wives and daughters were foot-bound and lived in almost total seclusion, the women in one remote Hunan county developed their own secret code for communication: nu shu (“women’s writing”). With the arrival of a silk fan on which Snow Flower has composed for Lily a poem of introduction in nu shu, their friendship is sealed. As the years pass, through famine and rebellion, they reflect upon their arranged marriages, loneliness, and the joys and tragedies of motherhood. The two find solace, developing a bond that keeps their spirits alive. But when a misunderstanding arises, their lifelong friendship suddenly threatens to tear apart.

A book all women should read

Where does Snow Flower and the Secret Fan rank among all the audiobooks you’ve listened to so far?

I liked the female narrator of this book. Often if I was to read lau ton or phrases like this used due to the book being based in China I would struggle to pronounce them properly. I throughly enjoyed the book and felt it envoked emotion.

What was one of the most memorable moments of Snow Flower and the Secret Fan?

SPOILER # When Lily visits snowflowers home. Things are not always what they seem!

I tend to skip over songs in my head but this was a nice part of the audio book.

Sisiterhood is the bedrock of our society.

Snowflower and Lily are Lao ton- sworn sisters for life who's relationships comes above men, other women and children. The book vividly describes the foot binding rituals the girls go through to honour their families and try to get the smallest feet in the county. Lily's feet are special which allows her to climb societies social ladder. She is paired with the prestigous Snowflower and they exchange skills of embroidary, cooking, cleaning and Nu Shu.

Nu Shu is an ancient chineese language used soley by women to communicate in private. More primative than chineese writing Nu Shu is an intriguing language which uses context far more than english. Symbols are written between Snowflower & Lily on their secret fan to depict their lives together each time they meet.

There can be no sequel to this book as it tells not only the story of two young girls from their daughter days as children to their sitting quietly days as old sames, waiting for the afterlife to come and take them. The book talks intimately and openly about strong female relationships and our book group felt many of the themes were relevant to everyday society.

How long do you expect to keep a friend for? What happens at different stages of your life? How are women viewed from youth to being aged.

The book describes many fascintating rituals from 19th century China that take place in mourning, death, sealing of fates and preparing for the afterlife.

The book inspires a visit to China to learn more about its history and current state.

Moving story and insights into of the hierarchy, paternalism and culture of foot-bound Yao women in 19th Century Hunan, China. We learn about the role of women in the women's areas, their toil and devotion to their families, their sisterhood and devotion to one another... Beautifully and movingly written but ultimately non-confrontational about a system of gendered violence that sacrifices the interests of women and girls. Amidst the violence a special bond between two women - "laotongs" "old sames"...

This fascinating story highlights the brutality not only of foot-binding but of unequal social structures, of war and its impact on communities, and on women's solidarity with one another. It draws attention to the development of a unique women's only language - nushu - a beautiful and delicate, but somewhat limited, script used to convey hardship, sorrow and solidarity between women.

Would you listen to Snow Flower and the Secret Fan again? Why?

This book is beautifully written and read. It very moving story about a friendship between two girls - Snow Flower and Lily - in early to mid 19th century China. But it is more than that - it immerses you in their world so that you see how little love these "worthless" women were given by their own families, by their husbands and mothers-in-law, you see how hard their lives were and how friendships between women could make their lives more bearable. You care about the characters and their lives, you become emotionally attached to these women, their children and their families. I suspect that each time you read this book, you will pick up on details you missed the previous time.I have added this book to my list of books to re-read, as it moved me very much and made me cry.

It's difficult to pick out a favourite character as I am still pondering over the book, the storyline, the characters and events. I loved Lily, Snow Flower and Madam Wang, but was also fascinated by other characters such as The Butcher.

Which character – as performed by Janet Song – was your favourite?

I really liked Janet Song's performance when she was reading the dialogue of Madam Wang - she really brought this character to life. Initially, I found Janet Song's reading style a little strange, but soon settled into the rhythms of her speech and by the end of the story I really enjoyed the way she read this story.

No, I wanted to savour the slow-pace of the story and the details of the characters' lives. But I also found the book hard to put down.

I have to confess that I cried at the end of this book. I cried for both Snow Flower and Lily, for the things they left unsaid and for their enduring love for each other. This is a beautiful book, and one that I will read again and again.

fascinating insight into a different world

I had heard about foot binding, but I had no idea how brutal the practice was, and it is at the heart of this story about the friendship of 2 young girls from very different Chinese families, both with perfect 'golden lilies'. A truly fascinating tale, quite horrifying at times, desperately sad in places. I just wish I had opted to read it rather than listen to it. There are good reasons why the narrative voice might sound like an elderly woman who is tired of life and deeply depressed by the mistakes she has made in her long life, but it really doesn't make for a good listen.

You know a book is good if you have become that emotionally invested in the characters that you start to cry at the end. An amazing story about the trails of a womens life and superbly read.

interesting and captivating story, not read anything like it before. the narrator was excellent and I felt this really added to my enjoyment of the book.

Book was ok couldn’t get my head round the number of times women were described as worthless.

I also didn’t like the accent of the narrator would have been good to have options that a user can select in terms of narration.

Won’t be reading this book again

A gripping tale from ancient China

I have read (or listened to) almost all of Lisa See's novels now, and I found that this one stands out as perhaps her most ambitious work. The setting alone (Hunan, China in the 1800s) must have been quite research-heavy to draw up and navigate, but I feel like beyond that, the characters are perhaps more nuanced than they tend to be in other Lisa See novels. we still get the fairly broad strokes she likes to use, Chinese zodiac determining/being highly symbolic for a person's character etc, but she also allows her protagonist to be and act in a much more fundamentally misguided manner than she does in other works (where it's usually more about a fundamentally good person erring in a crucial situation). While I really did enjoy the book and would recommend it to anyone with an interest in China and/or women's rights, I'm not sure it would work as light entertainment or a holiday listen - here, China Dolls or Shanghai Girls may be more suitable.

Loved this book . I listened for hours at a time.
Most poignant moment was the death of Beautiful Moon. Description of the foot binding process was enlightening and gave insight into this ancient ritual. The narrator was not flamboyant but held your attention throughout.

A great story and narration about what it was like for women in China in the nineteenth century - a world and seeming centuries away from life in Britain today. I was transported and totally immersed in this alien and fascinating culture. An informative, deeply moving tale beautifully told.

Great story, not so great narration

Loved the story and the fact that it was beautifully written and seemed mostly historically and culturally accurate, at least to a contemporary overseas Chinese reader. The specific traditon of LaoTong matches was interesting to learn about and I even had to look it up after.

Unfortunately, I found the narrator's style a little strange and stilted. It sounded like a fake voice at first and so monotonous. I considered returning this book. Luckily, either I got used to it or it got better after several chapters.

Loved listening to this story of a world other than what we know today and a culture so far removed from modern day worlds. A story filled with different twists and the honesty and resilience of women in a very male dominated old China