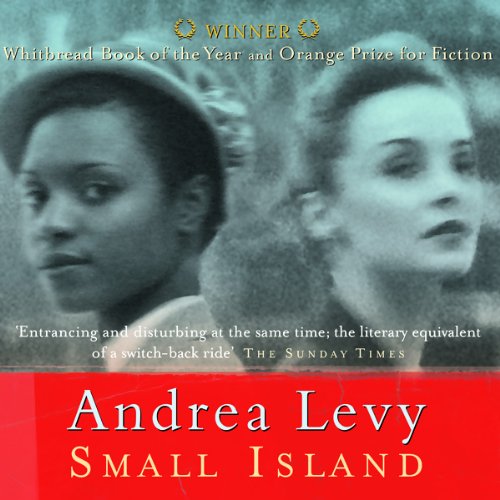 Queenie Bligh's neighbours do not approve when she agrees to take in Jamaican lodgers, but Queenie doesn't know when, or if, her husband, posted to India during the war, will return. What else can she do?

Gilbert Joseph was one of the several thousand Jamaican men who joined the RAF to fight against Hitler. Returning to England as a civilian, he finds himself treated very differently. Gilbert's wife, Hortense, too, had longed to find a better life in England. But when she joins him, she is shocked that London is far from the golden city of her dreams. Even Gilbert is not the man she thought he was.

Through the stories of these characters, Small Island explores a point in England's past when the country began to change. Andrea Levy handles the weighty themes of empire, prejudice, war, and love, with a superb lightness of touch and generosity of spirit.

Commonwealth Writers' Prize Winner, 2005
Orange Prize for Fiction Winner, Best of the Best, 2005
"Every scene is rich in implication, entrancing and disturbing at the same time; the literary equivalent of a switch-back ride." ( The Sunday Times)
"What makes Levy's writing so appealing is her even-handedness....The writing is rigorous and the bittersweet ending, with its unexpected twist, touching." ( Independent on Sunday)

What listeners say about Small Island

Brings a wonderful story to life!

Having borrowed the paperback copy of Small Island from the library, I knew I would enjoy this recording. I was, however, completely unprepared for what a special experience the audio version would be. On paper Andrea Levy writes the words of the Jamaican characters beautifully, and you can hear the music in their voices. But listening them spoken aloud is really wonderful. I do not know anyone from Jamaica, so I cannot say for sure whether the readers have authentic Jamaican accents, but to me they sounded superb. The book really did come to life in a new way with this recording. Small Island has strong likable characters woven into a good story, sprinkled with gentle humour. Not only that, but it makes you think too. I was left feeling that I?d really learnt something about lives different from my own. I found this a funny, interesting, thought provoking and thoroughly enjoyable listen.

That crosses all lines, race, gender, age, and location. Andrea Levy's characters are so achingly real, that to finish the book is a heartache. Her prose licks along at a wonderful pace. Sheer delight.

Fascinating interesting and insightful.
Amazing to capture the minds and characters of the first arrival of Carribean setters in the uk.

like a wonderful and insightful play for your ears

Hightlights the struggles of multi-cultural unification in a funny, loving, realistic and passionate way. Amazing 🤩🤩🤩

Small Island is a really well narrated book. I am unsure about the ending. overall thumbs up

Whoa, what a lot it packed in to 6 hours. Great story line, humour, sadness and a good twists.
I had not realised the extent of the racism the Jamaicans had put up with joining after joining the british troops in WW2, from both the Brits and the Yanks stationed here. As Gilbert pointed out, Jamaica is not in Africa but is part of the British Empire, so they had more right to be here than the Septic Tanks!!!
A line from the book that will stay with me,was the quote from Hortense "We have to join the war, as if Hitler wins we will be back to slavery" I have read a few WW2 books but not seen it from this angle before, thank you Ms Levy for opening my eyes.
Also a big thanks to the narrators who bought this fabulous litte book to life.

Really enjoyed reading listening to this. It took me back to life in the early days. Loved the authors style

Pity about the noises

For once I really regret buying an audiobook instead of a print copy. An excellent, sensitive story with very well observed characters has been ruined by the addition of extraneous noises.

This is a quick way to take on the books from my reading list for college whilst doing the housework.
As for the book I wouldn't have read it if it wasn't on the list. Good recording all the same and the ironing is all done too.

I love Andrea Levy as a writer. I also love the performance of most of the narrators in this story, though some accents made it a little hard to make out the words. However after about an hour of listening the story started to make less and less sense.

I opened the Kindle copy of the book and discovered that apparently abridgment means that the narrators read every other line. Characters disappear from a scene without any warning, new chapters start without pause, engagements happen without mention. I got so lost, I stopped listening and kept reading.

It is a beautiful, well-written book, that has been complete mangled in this Audio edition. If you can read, read the book. If you can't, wait for an unabridged version or have a friend read it to you. It is well worth the wait and/or effort. I think Andrea Levy is one of the most talented UK novelists writing right now.