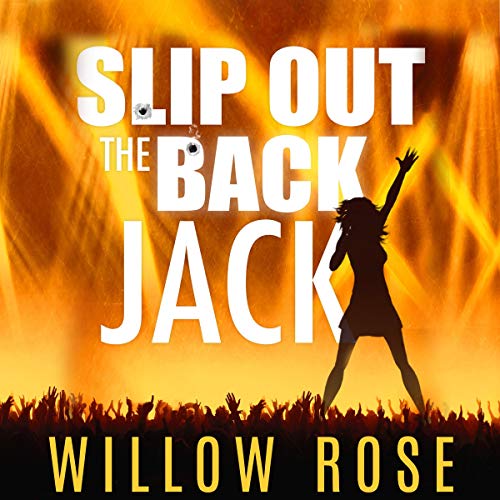 Slip Out the Back Jack

By: Willow Rose
Narrated by: Adam Verner
Try for £0.00

Mystery, love, and action: this book has it all

They take turns with the knife, cutting their thumbs open. A drop of blood lands on the dark wooden table. Eyes meet across the room. All four thumbs are pressed against each other one by one. Blood is shared, secrets buried.

Years later a brutal madman sprays bullets into a crowd at a movie theater in Miami and sends a chill through the entire nation. When human remains are discovered in the dense forest next to a biking trail in Brevard County, it is only the beginning of a series of gruesome murders which will shock the entire Space Coast.

Detective Jack Ryder is preoccupied with Shannon King and the strange email she has just received that leaves her terrified just as she prepares to go on stage at the Runaway Country Festival. Jack Ryder senses the connection and soon he realizes he is on the hunt for a serial killer with a killing spree that spans over more than a decade.

Slip Out the Back Jack is the second novel in Willow Rose’s best-selling series about Jack Ryder, a devoted father and committed homicide detective.

Scroll up and grab a copy today.

What listeners say about Slip Out the Back Jack

This carries on developing the characters introduced in book 1 but could also be read as a stand alone book. Great characterisation, great story, well read.

More than one way to enjoy a good book

This is book two in the Jack Ryder series and I don't think you need to have read or listened to the previous book to enjoy it. Again the story jumps around from character to character and time, so it is a bit slow and confusing to begin with but soon heats up. The mystery was interesting and the method of killing was scary (not the normal gun shot victims here..well okay a few because the body count was high). I like Jack and his family as characters and the fact that they are all slightly damaged from there past and I look forward to finding out how they move on and become a family, it adds drama to a story that is already full of drama.
Jack is called in on his day off with the family because a body was found in the woods with an unusual cause of death but it is the emails his girlfriend is getting that are the real cause of his concern. Years ago she received emails just before a mass shooting happened in a cinema and now she has got another one.The problem is the police and public we're lead to believe that after the shooting the killer turned the gun on himself. Is it a copycat? Or is the killer back? Jack fears the worst because nobody but the killer knew she received the first around of emails. How can Jack find a killer and play bodyguard to his girlfriend if she is on stage signing out her heart but will that cost her heart? Then the body count rises and so does the press coverage. Can Jack find a connection or is he stretched to thin to see what is right in front of him and will he see it time?
I sped up the speed of the narrator because he dragged out the words touch for my liking but once I did that I found I enjoyed his speaking and the story just flew by.
I was given this free review copy audiobook at my request and have voluntarily left this review.

Slip Out the Back Jack (Jack Ryder #2) was a great read by Willow Rose. A brutal shooting happens in a movie theater in Miami. There are human remains that are found in the dense forest next to a bike trail. This discovery happens to be the beginning of a series of gruesome murders. Detective Jack Ryder has only been focusing on strange emails his girlfriend Shannon King received. She is preparing to go on stage at a festival and is terrified. Jack believes there is a connection to the murders and he realizes he is looking for a serial killer. Only this killer has been on a decade long killing spree. I enjoyed reading this book and can't wait to read more by Willow Rose.

Jack and Shannon are continuing their relationship when her estranged husband enters the picture again. Shannon is performing at a multi-day concert when a gunman kills a number of people. Jack is called upon to investigate. There are number of concurrent stories in the book, and the reader is left to determine how they all fit together.

Jack is involved with a couple of the story lines and works to solve the mysteries.

This is another well written, well executed story by Willow Rose and I enjoyed it. I will be continuing with the rest of the books in this series.

I listened to the book and I thought the narrator did an excellent job.

Slip out the Back Jack

I am so enjoying this series, can't wait to start reading the next one. Really enjoyed fhis one, as getting to know Jack and his ways. Loved the murder theme in this one. The narration is excellent.

Slow start, but worth the listen to the very end. Classic unpredictable willow rose twists!

The narrator is terrible !!!