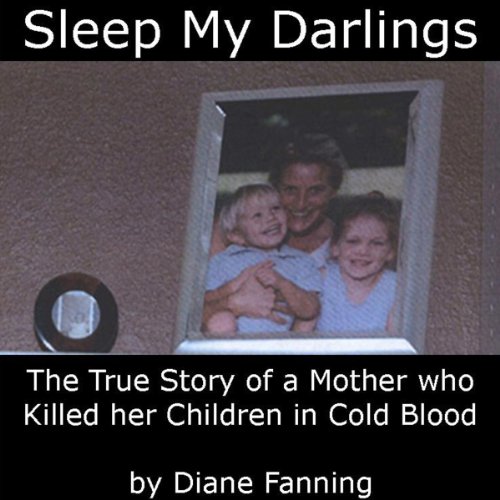 By: Diane Fanning
Narrated by: Julie Williams
Try for £0.00

Police found the body of 16-year-old Calyx on her bed under a white blanket. They found her 13-year-old brother Beau in the family car covered up the same way. Both had two gunshots to the head. Both had been dead for hours. The only other person who had been in the home was their mother, Julie Schenecker. She told law enforcement that she could no longer tolerate her kids talking back to her. Was this a case of premeditated murder? Or a horrible tragedy fueled by a mental illness that had spun out of control? Sleep My Darlings is the deadly true story of a mother's betrayal of her natural instincts and the loss of two innocents' lives.

About the author: Diane Fanning is the author of the Edgar Award finalist Written in Blood: A True Story of Murder and a Deadly 16-Year-Old Secret that Tore a Family Apart. Her other works of true crime include the best seller Mommy's Little Girl, A Poisoned Passion, Gone Forever, and Through the Window. She is also the author of the Lucinda Pierce Mysteries. She has been featured on 48 Hours, 20/20, Court TV, The Today Show, and the Discovery Channel, and has been interviewed on dozens of radio stations coast to coast. Her books are sold throughout the English-speaking world, including the UK and Australia, and there are more than half a million copies in print. Before becoming a writer, Fanning worked in advertising, and she earned more than 70 Addy Awards.

What listeners say about Sleep My Darlings

I want my money back

This could have been better, by far. The book struggles for material with three hours still to go and continues to use cheesy anecdotes, overuses the words of the children's father, until such a time when you beg the narrator to chirp in the old familiar " We hope you enjoyed your audible book"

I'm no author, but even I wouldn't have had the audacity to scrape a book out of such little material, I think Fanning is getting a little greedy and desperate at the consumers expense,.

I have to say that this is the most boring book I have ever read. I was determined to finish it to see if anything relevant to the murders was mentioned. No it never happened. I was actually getting angry listening to more about Harry Potter than I wanted to know, or the square footage of various homes and statistics that went on and on. In other words a load of useless information.
The narrator spoke so fast I wondered if she was also bored with the story and was hurrying the reading of it to get it over with. The author certainly thanked loads of people for helping her. Watch the trial on UTUBE and get all the facts and testimonies about the murders. It will save you money and leave you knowing what had happened. I will never try and read another of this authors books.

I don't know where this book comes in Diane Fanning's bibliography. I usually love her accounts because of her in depth research and fresh true crimes. But this book is so full of excruciating unnecessary minutiae that it's mind-numbing! We learn more about the military, Oahu, Ft. Leavenworth, and the mundane day-to-day (nay....second-to-second) activities of the Scheneker family than about the horrific murders of 2 innocent teens. There's no real sense of the mother's long descent into madness that ended in the cold blooded murders of her children. The deaths don't even come into play until the last 3 hours of the book. Then the reader is forced to take each and every step with the first responding police officers through the crime scene, from the front lawn to the bodies, with everything along the way described in great detail, from the number of forks on the kitchen counter to baskets of folded laundry. Meanwhile, we are waiting for them to finally find what we already knows awaits the cops - the bodies of two teenaged children, brutally shot in the face and head by their mother. After that, the author drags us through interviews of the neighbors rehashing hours of trivia about the Schenekers that we'd been told about in the preceding chapter! They actually use the children's Facebook pages frequently as a means of investigating the murders.. Plus there is a very cavalier attitude towards the gruesome tragedy. The narrator relates the story as if this is some lightweight chick-lit. Not her fault - it's the way the book is written.

The reader gets no real sense of ANY of the family members, particularly the murdered children. Much of the book focuses on the father's early life, his education and career military years. There's a point where he goes back to his high school decades later to receive some minor honor. For some bizarre reason, Fanning found it appropriate to list EVERY medal, award, honor and accomplishment that the father received while in the military. It had to be 15-20. Then, during the crime scene investigation depiction, Fanning actually listed the inventory of the items taken from the home - one-by-excruciating-one! If you listen to this book while driving, you will definitely fall asleep at the wheel! As usual, Fanning feels the need to include snippet accounts of other unrelated, but similar crimes, which occurred in the state of this one. Then she has the irritating habit of speculating what the victim and/or perpetrator was thinking at the time of the crime, i.e., "Did he know this would be his last second alive?" or "What did she think was on her mother's mind as the bullet spiraled through the barrel?" Really, Diane?!

What bothers me the most is that every one could see that the Julie Scheneker had been unraveling mentally for a very long - and highly visible - period. She had been on depression medication BEFORE she got married but never told her fiancé. Her erratic behavior, prescription drug abuse, alcoholism, hospitalizations in mental hospitals, etc. was very obvious throughout her life. Yet her husband, Parker, big time "Mr. Military", keeps moving his family from state, country to country, while ignoring his wife's mental decline and, more disturbing, the physical abuse that she perpetrated on their children. After decades in the military and a college degree, Parker was only making about $100,000 in 2011, so I don't get his excuse for not putting family first. His wife was acting all "fruity-loops", however, in spite of an investigation by officials due to allegations that the 16 year-old daughter was viciously attacked by her mother, he takes his butt to off Afghanistan, on some not-so-critical assignment for the US government. This, when his OWN home was a "war zone". But, then, no one took the kid seriously while friends and family turned a blind eye. Why? Because, obstensibly, this was a white upper middle-class family with a perfect FICO score!

This story could have been written in less than an hour. In fact, the Audible synopsis sums up the whole story quite nicely. The crimes, while tragic, aren't particularly compelling and the family unremarkable. It was hard to have sympathy for anyone - we barely "knew" the children or the parents. Even the description of the funeral was dispassionate and cold.

This woman went out and bought a gun for the sole purpose of executing the 2 children that she'd carried under her heart for 9 months. In the end, Julie Scheneker told the world that she killed her children because they were "mouthy" and that she had no regrets at all. After deliberating for 2 hours, the jury she was convicted her of 2 counts of capital murder. Being white, she received concurrent life sentences. All I can say is that it would have been "Old Sparky" for a black woman killing ONE stranger, much less TWO of her own children!

I have purchased almost every book by Fanning available on Audible. I was very impressed by the first 2 or 3. However, the last couple have been beyond awful. This one is by far the worst! Go to Wikipedia and SAVE YOUR CREDIT!!!

Honoring the short lives of the victims

This book is a tribute to the murdered teens. It gives a very detailed description of their lives: what they liked about school, their Harry Potter addiction, and the memorials after their deaths. The actual crime and criminal are almost never mentioned. I understand the impulse, but the result is a non-story.

Needs a good editor with a sharp red pencil

Robotic narration, too much irrelevant content. Research is great, but it needs to reviewed for relevancy. The story got buried in useless detail.

As always great story by Diane Fanning. Hard to listen to and get immersed into the story. The reading sounds like a robotic “Text Reader” program. I really want to finish the audio book, but I think I’ll read the book instead.

I finished this book in one sitting as I just couldn't stop listening. Diane Fanning is one of my favorite authors of True Crime. The story is fascinating and told in such a way that I felt I was part of the story. A must read, although the story is emotional at times, it is told with taste and consideration of the families involved. Dont miss this one for sure.