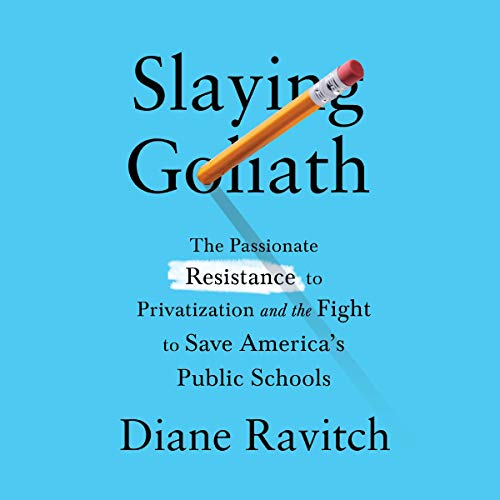 The Passionate Resistance to Privatization and the Fight to Save America's Public Schools
By: Diane Ravitch
Narrated by: Amanda Carlin
Length: 13 hrs and 15 mins
Categories: Non-fiction, Social Sciences

From one of the foremost authorities on education and the history of education in the United States, "whistleblower extraordinaire" (The Wall Street Journal), former US Assistant Secretary of Education, author of the best-selling Reign of Error ("fearless" (Jonathan Kozol, NYRB)) - an impassioned, inspiring look at the ways in which parents, teachers, activists - citizens - are successfully fighting back to defeat the forces that are privatizing America's public schools.

Diane Ravitch writes of those who have privatized the schools, the Disrupters, who believe America's schools should be run like businesses, with teachers incentivized with threats and bonuses, and schools that need to enter into the age of the gig economy in which children are treated like customers or products. She writes of the Koch brothers, the DeVos family, the Waltons (Walmart), Eli Broad, Bill Gates, Michael Bloomberg, Mark Zuckerberg, and many others, on the right and the left, as well as corporations, foundations, and more, intent on promoting the privatization of one of our most valued public institutions.

Ravitch lays out, in extensive detail, the facts showing that the ideas put forth by school privateers have failed; that their promises of higher test scores have not come to pass; that the "great hope" of Common Core has been a dud.

Arrayed against these forces, Ravitch writes of the volunteer army - "the Resisters" - that has sprung up from Seattle, Austin, and Denver, to Detroit, New Orleans, and Buffalo - parents, teachers, grandparents, students, bloggers, religious leaders, brave individuals, who, spurred on by conviction, courage, determination, and the power of ideas and passion, are fighting back to successfully keep alive their public schools.

Lots of enlightening information repeated past redundancy, and the bias was downright vitriolic. Weird combination.

Great and informative book from a trustworthy education expert. Unfortunately this book has robotic narration that is displeasing.

While I seriously struggled with the narration, I think that EVERYONE, especially those with children, should read this book and learn about the dark money and shady political tactics being aimed at the nation’s schools. The American Public Schools has been strong, and will stay strong thanks to the dedicated teachers willing to stand up for ALL children in the US. Read this book!