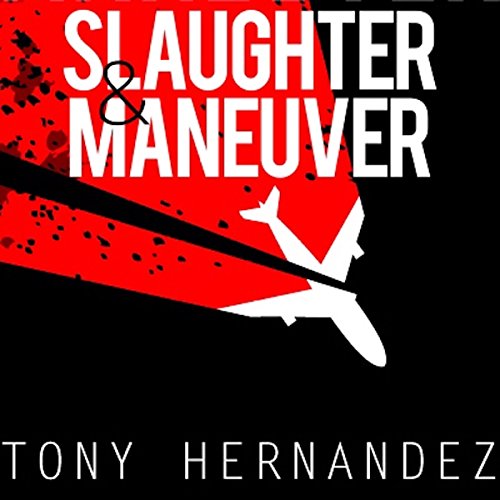 By: Tony Hernandez
Narrated by: Gary Tiedemann
Try for £0.00

Jason Henry is part of the CIA's Special Activities Division, which the US government claims doesn't exist. Juan Bocanegra is the newest member of the FBI's Hostage Rescue Team, America's premiere SWAT team. An investigation into a dead body found in France brings them clashing back together from a past they wanted to forget, while stumbling upon the biggest threat their country and the free world has ever faced.

From the cold seas west of North Korea, to the blistering desert sands of Saudi Arabia comes an international thriller of spies, plots, kings, terrorism, and the people caught in between.

Many will die, but will the plot be thwarted or is this just the first step towards a global collapse?

What listeners say about Slaughter & Maneuver

The story is contemporary and believable, interesting and global, as befits the scope of issues and combatants. A few too many flaws in every hero, for my tastes, but these will doubtless mellow with experience and age.

What did you love best about Slaughter & Maneuver?

I enjoyed Hernandez's work that packs a lot of bite into one novel. There is mystery, action, suspense, and I was overall satisfied for the new take in the genre!

What was one of the most memorable moments of Slaughter & Maneuver?

I really enjoyed the water scenes. I felt this was excellently done, both writing and performance wise. I was able to immerse myself into this section specifically.

Have you listened to any of Gary Tiedemann’s other performances before? How does this one compare?

I have not listened to any of Tiedemann's performances.

Past alliances could save or kill you

The only difficulty that I had was the very beginning of the book. I am not sure if this was the way it was written, or the performance that left me a bit off kilter. Once I gained my bearings into the novel's atmosphere, I restarted the book and was better able to follow the story.

It was suspenseful, and it kept me wondering will happen the next time I get in my car.

What does Gary Tiedemann bring to the story that you wouldn’t experience if you just read the book?

Well read and easy to listen to

I highly recommend the audible version

It was a thriller , well written and held your interest thru out the whole story line. When you think its time to put the book down the story wont let you. Highly recommend this book!!!

This book opens with some great action sequences, following a couple different operations happening at the same time. Throughout the book there were several different story lines going at once and the author ended up weaving them together very well. The author also does a great job of building up the plot throughout the story, and there were several unexpected twists and turns. The way the author explains everything makes the story plausible, like it could actually happen. The author did a good job explaining the character’s history and backstory, and the fact that the characters could actually make mistakes made the story more plausible. I also enjoyed how we got to experience part of the story through the bad guys point of view. The narrator did a fantastic job with all the different voices. It was impressive to hear him use so many different accents. He did a great job using unique voices for all the characters, and I no trouble telling who was talking. There was a musical chime every time the book would change viewpoints and a longer musical tune at the end of every chapter. I thought it was kind of neat at first to signify when things change, but overall it was unnecessary and actually slowed down the pace of the book, especially during the action sequences. Overall, it was a great book and it’s definitely worth a listen.

This audiobook was provided by the narrator at no cost in exchange for an unbiased review.

CIA & FBI Working Together, What is Next?

The book started out a bit disjointed until all the seemingly unrelated events taking place around the world were finally connected. I was hooked at about the half way point.

Listening to the CIA and FBI actually working together was a rare treat and also shows that you have to be a little on the crazy side to work field operations for either. It was also nice to see that a few mess ups did not result in the firing of good agents.

This audiobook was provided by the author/narrator/publisher at no cost in exchange for an unbiased review courtesy of Audiobook Blast.

I was a little confused at first, but stuck through and it got more interesting and together after just a little bit. Some of the things the characters do didn't seem believable to me, but I still wanted to know how intake played out the whole time.
I thought it was worth the read/listen.

I listened to the audiobook and really liked the narrator and thought his voices worked well with the story.

NOTE: I received a free copy to listen to in exchange for an unbiased review.

Enjoyable but bloated in places

Slaughter and Maneuver is an enjoyable thriller, with several twists and turns. It follows a group of Saudis why try use their controlling stake in a airline company to at a terrorist attack, and the FBI and CIA agents trying to stop them. The twists are good and keep you guessing. The characters are interesting and different.

The biggest flaw (and it was pretty big) with the book was plot bloat and pacing. It takes forever to get going. It opens with two different operations - one by the CIA in North Korea, and one by the FBI in the USA. Neither of those operations actually have anything to do with the main plot other than to introduce the characters. The North Korea plot goes on for way to long and doesn't actually focus on our CIA guy for most of it, so even somewhat fails at introducing him. The person it focuses on is inconsequential.

There are other placing issues, particularly around the terrorist plot. In an attempt to keep suspense we plot is never made clear until very late. This is fairly common in other books, but it is usually done via having the focus be solely from the heroes eyes. Here we get a focus on the bad buy, yet he somehow manages to avoid talking about his actual plan with anyone, or even in an internal monologue.

Tiedmann does well with narration. Providing clear reading, various character voices and accents. Makes it easier to follow what is going on and who is saying what. Very happy with his work.

Great listen though I felt there was an occasional hole in the story line, but it was well worth my time. I wish the narrator had shown a little more passion or emotion but maybe that is just me being overly critical. I felt the performance was a little monotone, but I never thought about stopping.

Amazing, I couldn't stop listening to the story. At work I kept taking breaks to hear what was next. I'm waiting for the next novel by Tony.