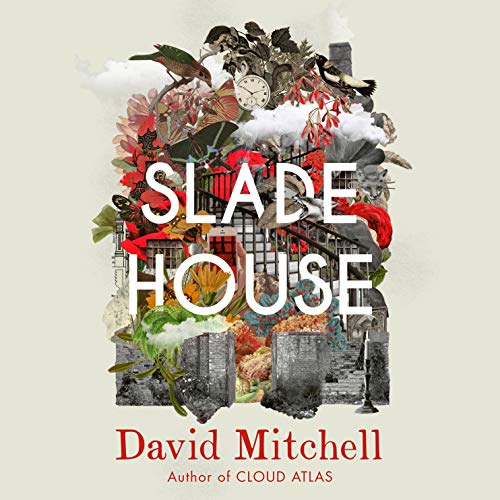 By: David Mitchell
Narrated by: Tania Rodrigues,Thomas Judd
Try for £0.00

Prepare to be chilled, electrified and entertained - a gem of a novel from 'one of the most brilliantly inventive writers of this, or any country' (Independent).

Walk down narrow, clammy Slade Alley. Open the black iron door in the right-hand wall. Enter the sunlit garden of an old house that doesn't exactly make sense. A stranger greets you by name and invites you inside. At first, you won't want to leave. Too late, you find you can't....

A taut, intricately woven, reality-warping tale that begins in 1979 and comes to its turbulent conclusion at the wintry end of October 2015. Born out of the short story David Mitchell published on Twitter in 2014 and inhabiting the same universe as his latest best-selling novel The Bone Clocks, this is the perfect book to curl up with on a dark and stormy night.

What listeners say about Slade House

This is a genuinely enjoyable tale with no little depth to it which includes a repeating cycle as its main theme. This is no Groundhog Day experience though, each time through the cycle is seen from a different perspective. Most of the repetition is in the form of haunting "signposts" which chill the reader but seem superfluous to the characters.

The narrators are excellent, Thomas Judd does such a good job that I am disappointed when Tania Rodrigues takes over. Not for long. She carries the story along perfectly taking each of her main characters through their cycle with aplomb and building the tension expertly.

If I have a criticism it's that the last two of the five chapters are not as genuinely chilling as the rest. However, the clever juxtaposition of character perspective is very clever and the reveal in chapter four really did creep up on me.

The ending itself I found satisfying but I think will split opinions a little.

When all is said and done though, in my book this is very worthy of a credit.

A great listen with a slightly disappointing endin

What made the experience of listening to Slade House the most enjoyable?

Thomas Judd is one of my favourite voice artists and his rendition of "Nathan" at the beginning of this novel is excellent. Slade House is a "short story" but it's a proper novella so there's time for the story to develop even though it isn't overlong.

It's hard to have a favourite, since the overarching characters are the horrible ones. I did like the way that Nathan was written though, and I thought Sally was the most sympathetic.

Which character – as performed by Tania Rodrigues and Thomas Judd – was your favourite?

The performance by Thomas Judd of an aspergers child was extremely sympathetic and very well done.

No, it isn't that sort of book

This is a "horror" story by genre, but it's really a thriller mystery with some ghostly horror thrown in. But for the absolute last gasp paragraph or two I would have given it 5 stars, I just didn't like the ending, but that is totally personal preference.

Good, but a bit disappointing for this fan.....

I usually rate Mitchell's books 5 star with no hesitation. My favourites are Jacob de Zoet and Cloud Atlas, I very much liked Bone Clocks, but I have enjoyed all the others on audible so much more than Slade House.

Since finishing my listen I have learned that this has been described as "an expanded short story." Not sure whether this helps explain my disappointment, but certainly I felt it lacked some of the richness of his more substantial novels. It still has one of Mitchell's trademarks - the multiple linked storylines, and there is plenty of wit on display as we steadily learn more about the psychic goings-on down the dark alley that occasionally leads to Slade House.

So, perhaps my problem was the narration, especially the first section. An adult trying to sound like a young person is rarely convincing and in this case, I found it grating on the ear. And I thought both narrators too often gave emphasis to the wrong word or phrase, which left me feeling they either didn't understand what Mitchell has written - or maybe that they were under too much pressure to get the job done without going back for edits.

If you are already a fan, and especially if you have read and enjoyed The Bone Clocks, do have a listen and make your own mind up. But if you are new to Mitchell's wonderful books, I would recommend listening to at least one of the others I have mentioned before this one.

If you enjoy Mitchell's other novels you'll love this.

I was initially lured into David Mitchell's worlds by Blackswan Green and ever since have eagerly awaited his next novel. This doesn't disappoint. It's a gripping story with the reoccurrence of characters events from the other novels that I always get a bit of a thrill.

The book is divided in to sections each 9 years apart and narrated by a different character. Mitchell really nails both the voice of the character and the feel of the point in time in which they are set.

The audiobook gets the balance between performance and reading just about right.

With each new chapter, a new character is drawn to Slade House.

With each new chapter, a little more is revealed about what is going on in Slade House and this reader/listener tried to anticipate the outcome... but was still surprised.

Repetition is used to great effect. There are some genuine shocks here.

David Mitchell is a Genius

I don't think DM could write a bad sentence. Every line seems to contain within in it the premise for a whole other novel. His imagination is off the scale dazzling and enchanting. I read Slade House twice savouring the second time because I whizzed through it the first. It's scary, intriguing and brilliant. If you love The Bone Clocks then you'll welcome a snapshot into the claustrophobic world of Slade House. Highly recommended.

A pre- The Bone Clocks novel

Intriguing and easy to listen to, with superb narration. It will be particularly interesting for those, who have already read The Bone Clocks.

I wanted to REALLY love this ...

The formula of 'hooking, capturing, disposing of' the characters - it just repeated all the time. The first time it happened it absorbed your attention with fascination, and ended with shock. But after that, the book simply repeated that formula I lost count of how many times. It meant you didn't really become attached to any of the characters or care about them because it became 'oh-oh, I know what's going to happen to them ...' and it did. The basic framework of the novel had something to it as a story, but that intricate story became fragmented by getting caught in the repeat loop of going through the characters' repeat experiences. Imagine reading Hansel and Gretel from the perspective of the stories of all the children who went before - went in woods, found house, ate candy, *died* [repeat].

It would have been more shocking had, perhaps, one character discovered lots of previous victims and the 'reveal' being that character walking in while one was going through 'the process' - particularly with the additional reveal as to who the 'final character' actually was.

I found after the first character as soon as 'Slade House' was mentioned I'd already jumped to 'their end' mentally and knew what it would be. And I never had time to bond with the final character who was very important because my mind had already prepared her as a victim. If it was me, I'd restructure the book so the final character was in at the start and was investigating disappearances of the others, that you became to passionately care about that character, and then the final 'reveal' about who that character was would have been a huge shock. But I was really disappointed after having started out really wanting to love this book.

Currently listening to Pompei - The Life of a Roman Town by Mary Beard. I absolutely love it - the town of Pompei and it's population are very much brought to life, and you can visualise things like the water running in torrents down the middle of the road explaining why they built high pavements with stepping stone crossings in the road.

Which character – as performed by Tania Rodrigues and Thomas Judd – was your favourite?

None - the book didn't develop in a way so that you cared about the characters; they just became 'plot-fodder'. Even the final character who should have been pivotal, I didn't care about because I'd already made my mind up they were also either going to simply be fodder, or would solve the plot. Even the brother/sister didn't develop sufficiently for them to become 3-dimensional and for me to care about them in either loving/empathising/hating them - a shame also, because they also had potential to become complex characters that put you into a moral dilemma.

Do you think Slade House needs a follow-up book? Why or why not?

No - it's been set up that way due to what happens with one of the characters at the end. But I can't possibly read that repeat formula anymore - sorry! :o)

Like all his work. Amazing, read it now. Carries on from the bone clocks with ease

Absolutely excruciating. Uninspired, meandering trivia written with all the sophistication of a Year 11 essay. That will teach me to take notice of reviews.