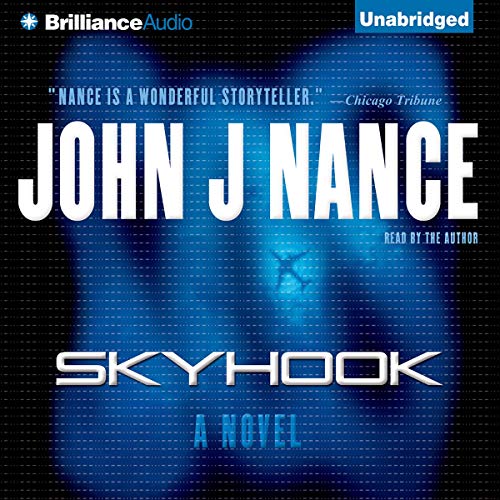 The "boomerang box," a high-tech computer program designed to save a plane experiencing flight trouble, is Dr. Ben Cole's baby. After a test run over the Gulf of Alaska goes awry, he suspects someone has sabotaged the plane's computer systems. And mysteriously, and almost simultaneously, April Rosen is horrified to learn that her father's plane has narrowly escaped a mid-air collision over the same patch of sea.

While Dr. Cole considers the uncomfortable notion that someone within his own company might wish him harm, Rosen begins her search for the cause of her father's hair-raising "near miss." But what both don't know is this: their fears have a common source. They are being watched by people in the Pentagon, who believe that the two might stumble upon the secret that will destroy them all before Skyhook has a chance to succeed.

What is Skyhook's real purpose? Is it commercial or military? And will its early implementation compromise the safety of flyers everywhere?

What listeners say about Skyhook

Not what I hoped for.

Would you try another book from John J. Nance and/or the narrator?

I selected this title hoping for a good aviation story. This was an OK story but I was irritated by the main character's flitting around which almost made this chick lit.

What could John J. Nance have done to make this a more enjoyable book for you?

Focused more on the pilot and not his daughter. This would have worked better from the pilot's point of view.

Like the performance and will look for more titles read by this narrator.

Well presented with rich characters. Author did a wonderful job. I look forward to the next book.

Love the adventure! Love the characters! Suspenseful,, full of action, set in Alaska And the descriptions are beautiful, some parts very humorous! Enjoy the read!

Keeps you in suspence! Great audiobook!