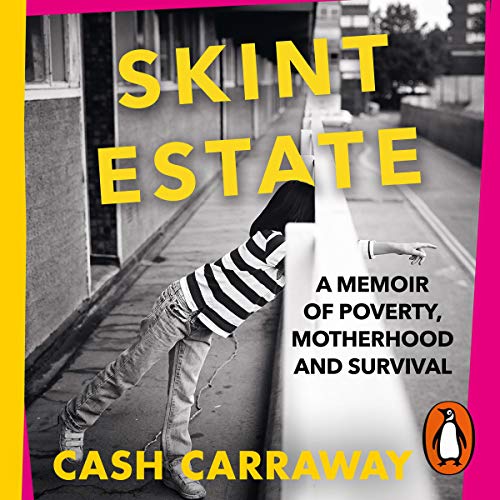 'Everyone has their price. It’s just not always monetary. Mine is though. 20 quid.'

Single mum. ‘Stain on society’. Caught in a poverty trap.

It’s a luxury to afford morals, and if you’re Cash Carraway, you do what you can to survive.

Skint Estate is the hard-hitting, blunt, dignified and brutally revealing debut memoir about impoverishment, loneliness and violence in austerity Britain - set against a grim landscape of sink estates, police cells, refuges and peepshows - skilfully woven into a manifesto for change.

Alone, pregnant and living in a women’s refuge, Cash Carraway couldn’t vote in the 2010 general election that ushered austerity into Britain. Her voice had been silenced. Years later, she watched Grenfell burn from a women’s refuge around the corner. What had changed? The vulnerable were still at the bottom of the heap, unheard. Without a stable home, without a steady income, without family support - how do you survive?

In Skint Estate, Cash has found her voice - loud, raw and cutting. This is a book born straight from life lived in Britain below the poverty line - a brutal landscape savaged by universal credit, zero-hours contracts, rising rents and public service funding cuts. Told with a dark lick of humour and two fingers up to the establishment, Cash takes us on her isolated journey from council house childhood to single motherhood, working multiple jobs yet relying on food banks and temporary accommodation, all while skewering stereotypes of what it means to be working class.

Despite being beaten down from all angles, Cash clings to the important things - love for her daughter, community and friendships - and has woven together a highly charged, hilarious and guttural cry for change.

"Cash is the definition of edgy, a truly distinctive voice." (Lionel Shriver, best-selling author of We Need to Talk about Kevin)

What listeners say about Skint Estate

Brave doesn't come close. I don't review normally but this is important and beautifully read

Sickening and heartening in equal measure

What a writer! Her turn of phrase made me laugh and cry as her story broke my heart, made me incredibly angry about our shitty government and austerity in general and filled me with hope all at once. Knew I had to listen to it to get the full experience after following her on social media and hearing her unique intonation and the wonderful Penge accent

Thank the lord for this lady

This is wonderful! I’m sure many labour supporting single mothers (like myself) who live in and around our capital can relate to this! It is also really funny, and far too late coming! Thank god, this lady by giving this (very, very) frank account has given a generation a voice, I don’t want London to be socially cleansed and only accessible to a load of boring, privileged torries! Go Cash! I hope those in charge are reading this. (They should be ashamed of themselves).

I loved this book and despite it being a hard listen at times due to the harsh reality of the story, I am glad I have listened to it and was very moved by it. Everyone should read this book and it’s truths which are a real eye opener and a disgrace that people still have to live and fight so hard just to get by even when they are working and trying to create a better life.

Hilarious, gritty, sad and brilliant all in one

Wasn’t too sure at first but by the end I loved it. Anyone who has never known domestic abuse or poverty should listen to / read this. I would recommend listening as Kash makes it more real.

Harrowing! Should be read by all tories!
Good luck with the rest of your life, Cash!

Wasn't able to put this book down and read it twice over the Christmas period. The gritty truth of the working class and the struggle of surviving on the benefits system well illustrated, painfully so.

Very good, interesting and original writing. But for whatever reason I struggled to properly connect and empathize with her. Maybe because of the fatc that her boook was a stream of intellectual and sarcastic comments (telling the author story almost in between the lines) rather than chronological and emotional memoir.

Cash does not spare the listener, this is a hard one to get through purely because it is happening now. The poverty trap has never been more apparent than in this.