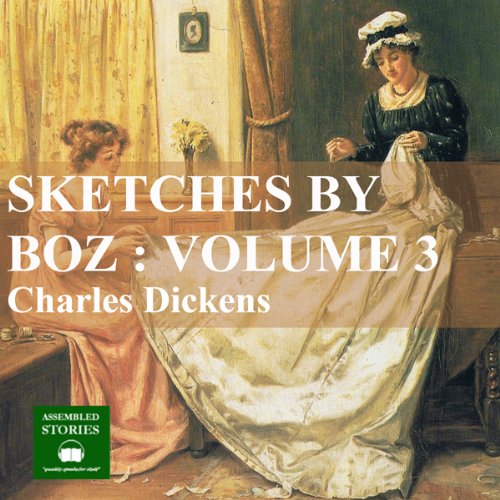 By: Charles Dickens
Narrated by: Peter Joyce
Try for £0.00

Queen Victoria... and Prince Albert were married in 1840. Dickens uses this event as an ingenious ploy to salute and promote domestic felicity, advising young ladies upon several examples of the different types of male available as partners. There follows a section describing various married couples from whom the young ladies could possibly learn a lesson. The author then entertains with a tale of Nicholas Tulrumble, newly appointed Mayor of Mudfog, with ideas above his station. Mudfog is modelled on the town of Dickens childhood, Chatham, and he continues, with this backdrop, to regale us with a satirical tale about the first meeting of ‘The British Association for the Advancement of Everything [aka Science]’ supposedly held there. Here his imagination runs riot and the authors huge influence and importance in the evolution of humorous writing is once again confirmed.

Fantastic ideas such as using cauliflowers as parachutes, theme parks for dissolute nobleman to indulge their rowdy behaviour, an automaton pickpocket that could be utilised by Her Majesties Government- the only disadvantage being it would soon wear out from overwork ! Redolent with the author’s usual swipes at the establishment and his reforming zeal Volume 3 of the Sketches is a Dickensian treat.

What listeners say about Sketches by Boz: Volume 3

These Sketches are not generally compiled in the various editions of Sketches by Boz.

To find the index search for:

Only for dedicated Dickens fans

If I weren’t a Dickens fan, I don’t think I would have finished this book. Much of it is kind of silly. Dickens’ names, usually so full of character that they have become part of our vocabulary, here are often in a rather juvenile form (like Professor Pumpkinskull), and perhaps his satire of scientific meetings was once humorous, but it is rather silly to a modern. We get his point, but the point has been made far better - check the Ig Nobel awards. Being a Dickens fan, I wanted to complete all of his writings, though in some ways this shows that even the greats can put out some drivel, though, with wonderful use of language, nevertheless. (Come to think of it, many academic papers are like that.) It’s a good thing Dickens turned to writing novels. The first couple of volumes were better, but also not amazing (you can see my reviews of those). So, sure, if, like me, you want to say you’ve read all of Dickens (I’m probably still missing something he’s written), go ahead. The performance is excellent, so you will enjoy listening to someone read well and expressively, even if the content is meh.

What a treasure! What a treat! At times laugh out loud hilarious, at other times sad and poignant. These early works of Dickens are indicative and a prescient foretelling of the genius that would be shorty revealed later. Best read with an Oxford English Dictionary on hand as Dickens vocabulary is wide and breathtaking and even includes portmanteau words. Some of the humor, sarcasm and insight will be lost on you if you don't take the time to understand the cultural references which can easily be found in various places on the web devoted to his works. Do yourself a favor and devote the time needed to fully absorb and comprehend Regency and early Victorian London facts, figures, fallacies and customs as their knowledge adds immensely to the pleasure you will derive from fully understanding this masterful collection of sketches and stories. Peter Joyce is an amazing one-man narrative tour-de-force. He adds just the right amount of narrative pauses, accents, and emphases.

The narrator is superb. The sketches themselves are delightfully absorbing. I enjoyed this enormously and would recommend it to any fans of Charles Dickens. Marvellous characters throughout. Captures the time and manners as well as setting. Great stuff!