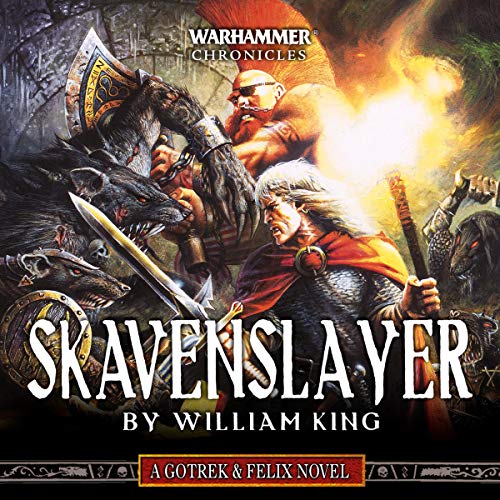 Between adventures and desperate for money, Gotrek and Felix work as sewerjacks in Nuln. Little do they know that villainous skaven lurk in the darkness, planning to tear down the mighty city....

Listen to it because

It's classic Gotrek and Felix which introduces a threat that will follow them throughout their heroic careers and even threaten Gotrek in his second life in the Mortal Realms: the sinister Grey Seer Thanquol.

Gotrek and Felix: unsung heroes of the Empire or nothing more than common thieves and murderers? The truth perhaps lies somewhere in between and depends entirely upon whom you ask.

Seeking to undermine the very fabric of the Empire with their arcane warp-sorcery, the skaven, twisted Chaos rat-men are at large in the reeking sewers beneath the city. Led by Grey Seer Thanquol, the servants of the Horned Rat are determined to overthrow this bastion of humanity. Against such forces, what possible threat can just two hard-bitten adventurers pose?

What listeners say about Skavenslayer

Sad to finish it

Gotrek and Felix have always been my favourite series, and the release as audiobooks was welcome. My only criticism is that more haven't been released!

Love it, like all stories about Gotrek Gurnisson and Felix Jagger. Excellent performance from Jonathan Keeble.

Great audio book, release the next one!

I love the warhammer fantasy world, I love this book and my boy Jonathan Keeble leaves it all in the studio when it comes to those skaven. More please!

This series of stories is one of my favourite books. I loved reading everyone and now it is even better with someone give such an excellent performance telling the story. This gives the characters new life.

funnier than you think!

Part grimm fantasy, part comedy. If you though Skaven were scary this will change your mind!

haven't read this series in a while, has been great to listen to them. Very good narration by Jonathan please keep this series coming! Can't wait for the next in the series!

I've said it once and I'll say it again, Jonathan keeble is the god of narration! excellent performance and great writing. loved it!

Another grand adventure for Gotrek and Felix

taken me a long time to get into these books but they are great!

keeble out does himself.

The second in the Gotrek and Felix books is a little more centered than the first and is incredibly well performed. Keeble perfectly capturs Skaven.

The Skaven make hilarious and fascinating characters. Besides the two heroes, you get the POV of various ratmen characters throughout and get to see their culture from the inside. These filthy, warp dust snorting, narcissistic, diseased ratties could easily rule the world if they could just stop stabbing each other in the back. Audible: MORE GOTREK PLEASE! Games Workshop: NEW THANQUOL NOVEL PLEASE!

Some of my favorite stories. I will continue to purchase any Gotrek and Felix Audibles realesed. Such fun fantasy books that helps you escape reality for awhile.

Wonderful listen, managed to make me laugh out loud and was greatly enthralling, can't wait for the next book in the series.

A Modern Sword and Sorcery Classic

I've been a fan of the Slayer series for years. I'm thrilled it is an audiobook!

love the skaven. love the story. remember to bring your piss-rags. well worth my time.

I have loved both this book and Trollslayer. I anxiously await the next book and hope J. Keeble is available to read. His range of voices is expansive. His skaven are perfectly portrayed!

Amazing story, as expected in the gotrek and Felix series, but the reading was with out a doubt the best ive ever heard

Can't believe this... possibly my favorite book of all time. I'm so happy to see it done in an audiobook.

I've never listened or read any Warhammer stories before. I thought I might try genres I'm not familiar with. Skavenslayer did not disappoint me. The narration is fantastic and the narrator does an excellent job of conveying who's speaking through different voices. The story is great, too. I knew before I'd reached chapter 2 that this book would be immensely enjoyable. I will be looking for more written by William King and narrated by Jonathan Keeble.

You don't need to know about warhammer to enjoy this book. Great characters and a dark world for them to struggle in.