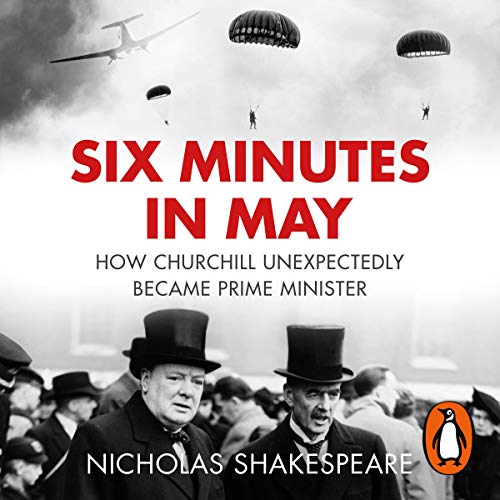 Six Minutes in May

By: Nicholas Shakespeare
Narrated by: Peter Noble
Try for £0.00

Random House presents the audiobook edition of Six Minutes in May by Nicholas Shakespeare, read by Peter Noble.

London, May 1940. Britain is under threat of invasion, and Neville Chamberlain’s government is about to fall. It is hard for us to imagine the Second World War without Winston Churchill taking the helm, but in Six Minutes in May Nicholas Shakespeare shows how easily events could have gone in a different direction.

It took just six minutes for MPs to cast the votes that brought down Chamberlain. Shakespeare moves from Britain’s disastrous battle in Norway, for which many blamed Churchill, on to the dramatic developments in Westminster that led to Churchill becoming Prime Minister. Uncovering fascinating new research and delving into the key players’ backgrounds, Shakespeare gives us a new perspective on this critical moment in our history.

Selected as a 2017 Book of the Year in the Guardian, Daily Telegraph, Observer and The Economist.

"A gripping story of Churchill’s unlikely rise to power." (Observer)

"Totally captivating. It will stand as the best account of those extraordinary few days for very many years." (Andrew Roberts)

What listeners say about Six Minutes in May

Does much to straighten the record

Using a mass of documents written at the time,, Shakespeare unfolds the events as they happened in great detail. In doing so he restores dignity to Chamberlain without detracting from Churchill. Fascinating and illuminating.

an excellent piece of historical reportage...

this is a hugely enjoyable book/listen, made all the more fascinating by the author's personal family insights. I'd have maybe edited an hour from the initial Norway invasion story - but overall a brilliant piece of work

This audiobook begins with a seven-minute reading of a long list of the main characters and their positions - a terrible beginning that is of no use, given that we've no chance of remembering such a long list.