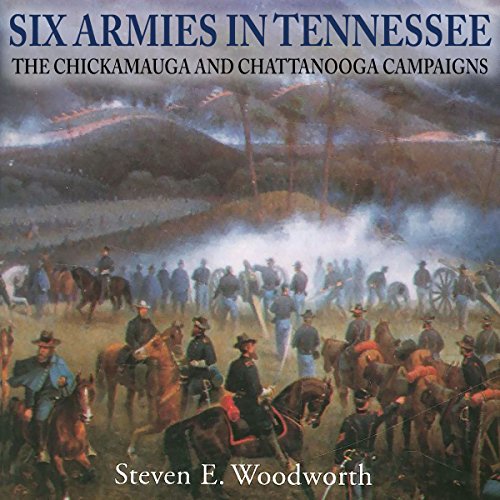 When Vicksburg fell to Union forces under General Grant in July 1863, the balance turned against the Confederacy in the trans-Appalachian theater. The Federal success along the river opened the way for advances into central and eastern Tennessee, which culminated in the bloody battle of Chickamauga and then a struggle for Chattanooga. Chickamauga is usually counted as a Confederate victory, albeit a costly one. That battle - indeed the entire campaign - is marked by muddle and blunders occasionally relieved by strokes of brilliant generalship and high courage. The campaign ended significant Confederate presence in Tennessee and left the Union poised to advance upon Atlanta and the Confederacy on the brink of defeat in the western theater.

"A fine analysis of strategic and tactical operations, stressing the influence of commanders on the success, or failure, of their armies." ( Kirkus)
"Concise and easily read... enables the reader to grasp the full significance of the whole campaign." ( Chattanooga Free Press)

What listeners say about Six Armies in Tennessee

A good overview of an important point in history

Unless you are an expert of this point in American History you are unlikely to have great knowledge of this time... this Audio Book can offer you great insight into this period and teach you a great deal about this important time. The Narrator handled the material well. This book was given to me for free at my request and I provided this voluntary review.

I've read a few depictions of the Civil War in the Chattanooga area (both non-fiction and fiction; fun fact: Harry Turtledove's "Sentry Peak" is a retelling in a fantasy setting). I enjoyed this book better than some of the others I'd read as it doesn't pull any punches on either side. There is plenty of criticism to be made and the author isn't afraid to point that out. The book does focus more on the personalities, decisions, and tactics of the various battles. It talks a little about the political climate and ordinary citizens of the time but discussions of those takes a real back seat to the generals. As the book places so much emphasis on the generals and the details of the battles the audiobook version would have really benefited from a PDF attachment like many other non-fiction titles. Some of the battles would have been easier to follow with a few maps, and photos of the various commanders would have made it easier to keep who's who in mind. The narration for the title was adequate for a non-fiction book, but as has been pointed out there were some mispronunciations that were a little annoying at times. If you enjoy military or Civil War history and want a good overview of this battlefront this is a good title read. I would definitely consider another title by this author. I received this book for free in exchange for an honest review.

This book was ok but the narrator sucked

The book was ok. I disagree with a number of the claims the author makes about Bragg and the army of the Tennessee. The worst part was the narrator he was just awful. He mispronounced names and places. Some so easy that he had to purposely do it. For example General Cleburne was pronounced Clayborn. I didn't realize he was talking about Cleburne until the end of the book.

Excellent excellent accounting of the fighting in Tennessee.

Alright, first off, if you are not very familiar with this campaign and the area it takes place I would HIGLY recommend at the very least having a map on your phone to reference. If you’re familiar with the campaign and the region you be okay but this book is so detailed that it does reference some smaller more obscure locations and engagements for added context or clarification. Having a map will very much help when trying to keep the battle lines straight during the small skirmishes during big moves. I put that first because this book is excellent in that regard. We get a lot of behind the scene and small time skirmishes that really go above and beyond in framing the decisions the commanders made. I really really enjoyed this book. I always feel the fighting in the west takes a make seat to the more picturesque and dramatic fighting in the east under Lee, it is nice to listen to a book that covers the fighting as a story not just a retelling of the movements and casualty numbers. This book does not shy away from making judgments either. This is quite a break from the norm. Most historians are hesitant to make a judgment or supposition. This was refreshing because I thought it was nice to have an expert willing to say that some of the “what if’s” everyone always talks about would have meant and how he thinks they would have played out. Using these scenarios as a frame work to weather Bragg or Rosecrans make the right choices. Mr Nevitt is as usual excellent suited to the genre and was a pleasure to listen to. This book was provided to me at my request in exchange for an honest review. I was greatly enjoyed this book. Fair, complete and far reaching in its coverage, told in an engaging manner by an excellent and talented narrator.

Six Armies in Tennessee provides a detailed and non-biased look at the battles of Chickamauga and Chattanooga. This is a must read four people interested in the battle strategies  and tactics of the Civil War generals and officers.  The book is very focused on its subject matter and will not suit those looking for a more general outline of the war. This book provides history in the way history ought to be presented, without modern bias or an emotional leaning towards one side or the other. The result may be a bit dry, but it allows the reader to come to their own conclusions. The narrator of the audiobook provides an easy to listen to and engaging narration.  I received a complementary copy of this audiobook. This is my honest and voluntary review .

I am not much of a non-fiction book on war kind of reader but decided to give this one a try since I enjoy Civil War fiction. I'm glad I did. It certainly gives an interesting look into the Tennessee campaigns and their impact on the outcome of the Civil War. The Civil War is a sad and tragic part of American history and to learn more about the leaders and their decisions definitely brings a different perspective than fiction. The struggles and difficulties of transporting troops and supplies, inclement weather, and leaders who, at times, were at odds with each other all certainly made a significant impact on the outcomes of these campaigns. The author did a good job of making the information regarding these Tennessee battles clear and understandable, even for a Civil War dabbler like me. Six Armies in Tennessee is a book Civil War buffs will not want to miss. I listened to a complimentary copy of the audiobook and was not required to write a review. Bill Nevitt did a great job with narration--good pacing and voice inflection, that made the hours pass quickly and enjoyably.

Tennessee Role in the Civil War

Six Armies in Tennessee is the turning point in the trans-Appalachian theater for the Union during the Civil War. This history book touches the economics, social, and military aspect of how the Civil War affect the people living in the trans-Appalachian mountains. The narrator, Bill Nevitt sounds like a popular university professor giving the lectures. The narrator does not put the listeners to sleep. He has a great voice. The only suggestion, I would recommend is to buy this book especially if ones is doing a research or a thesis. Great Civil War reference book. I was given this audiobook by the narrator. I have volunteered to write an unbiased review for this book. I was not compensated or influenced in any way for writing this review.

My first read/listen from author Steven E. Woodworth was not my typical read. A non-fiction work detailing 2 Civil War battles. Highly detailed & well-written, this book may not be for everyone but I found it enjoyable. Bill Nevitt’s narration made the 10 ½ hour book pass quickly. I was given an Audible copy of this book & am voluntarily reviewing it. (RIP Marley January 20, 2014 - July 24, 2018).

Great retelling of the Chickamauga and Chattanooga campaigns. Narration was exceptional...this book was a great companion on a road trip. I voluntarily accepted a complimentary copy of this book in exchange for an unbiased review.