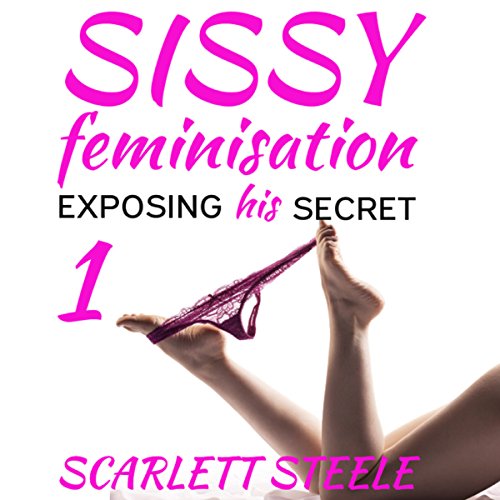 By: Scarlett Steele
Narrated by: Concha di Pastoro
Try for £0.00

Dressed in a pink lingerie outfit, James is caught red-handed by his wife as he applies her crimson red lipstick while admiring his curves. And within a matter of hours, the blushing cross-dresser is transformed into the petite maid his wife has longed for....

James leaps at the golden opportunity while his successful lawyer wife is away on a two-week-long business trip as his inner sissy takes over and he starts to explore Kathryn’s vast array of silky thin lingerie.

The world becomes his oyster as the stay-at-home husband rolls his wife’s pink delicates up his thighs, slips on her strapless bra, sinks his teeth into her red lipstick, slips his feet into her three-inch pink heels, and saunters around the vacant house exploring his hidden femininity.

And just like that, James finds himself slowly transforming into his new persona...Jennifer.

His own little secret.

That is until Kathryn returns early from her trip and catches her husband pink-handed, robed in her undergarments and pirouetting in front of the mirror admiring his curves.

Shocked and intrigued, Kathryn seizes the opportunity to slowly transform her embarrassed husband permanently into her own personal sissy maid, tending to her every need both behind closed doors and in front of their new neighbors.

This 12,000-word short contains explicit scenes and should be enjoyed by adults only.

What listeners say about Sissy Feminization