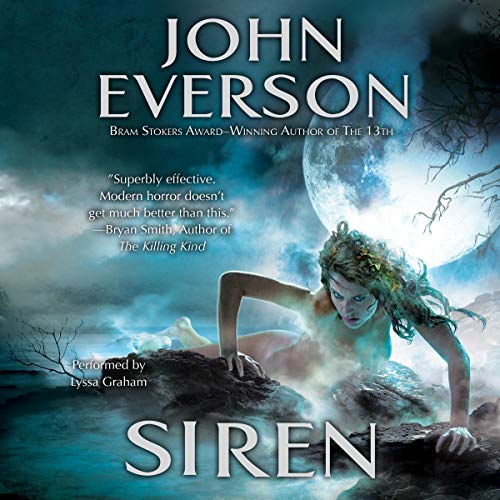 Evan is entranced by the alluring song of the beautiful naked woman he saw in the surf one lonely night. But this is no mere seductress. She is a siren, one of the legendary sea creatures who prey on unsuspecting men. And she has claimed Evan as her next lover.

Night after night, Evan walked along the desolate beach, grieving over the loss of his son, drowned in an accident more than a year before. Then one night he was drawn to the luminous sound of a beautiful, naked woman singing near the shore in the moonlight. He watched mesmerized as the mysterious woman disappeared into the sea. Driven by desire and temptation, Evan returned to the spot every night until he found her again.

Now he has begun a bizarre, otherworldly affair. A deadly affair. For Evan will soon realize that his seductive lover is a being far more evil...and more terrifying...than he ever imagined. He will learn the danger of falling into the clutches of the... SIREN.

What listeners say about Siren

A New Take on an Old Story

This was a revival of an old methological tale. I found the story interesting except that it probably could have had a few less sexual scenes in it.

This story was a lot different than I thought it would be.
The story is very graphic, it left quite a picture in my mind. I started listen and didn't want to put it down until it was finished.

If you are looking for a cannibal siren, adulterous relationship, overt stupidity, this book is for you, but don’t waste time.

I made the mistake of reading only the description of the novel and not the reviews. It wasn’t clear from the description that this was what this book was. I have never enjoyed or read horror, much less erotic horror. The book was disgusting and predictable. I knew this about a fourth of the way through this book but suffered through the rest to be able to fairly review and see if it had any redeeming quality. I felt sorry for Sarah, the wife of the main character,Evan, but had absolutely no feelings, nor did I like anyone else in the book. Evan and his friend Bill were dumb as a brick. The seductions and cannibalistic murders seemed gratuitous because of the lack of feeling created for the people or the siren. Over the last 8 years this is the worst book I have read. Luckily, the audible version was cheap so I listened to the last part of the book so I could do something useful while listening to the book. A complete waste of time.

Great stir with lots of twists!

Absolutely couldn’t stop listening to this book. Almost ran out of gas, because I was so into the book I wasn’t paying attention to anything but the road and the story!