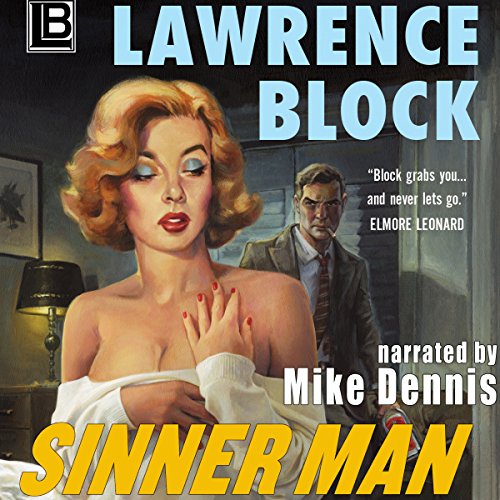 By: Lawrence Block
Narrated by: Mike Dennis
Try for £0.00

Lawrence Block's first crime novel - lost for nearly 50 years! To escape punishment for a murder he didn't mean to commit, insurance man Don Barshter has to take on a new identity: Nathaniel Crowley, ferocious up-and-comer in the New York mob. But can he find safety in the skin of another man...a worse man...a sinner man?

What listeners say about Sinner Man

Haveing to reinvent yourself

Lawrence Block's first crime book. He wrote so many other books in this genre, and a good thing too. I enjoyed listening to this book. At the end there is some background information on the book which is interesting.

You find yourself listening and actually seeing this story, characters and locations appear. Great job on the writing and if you should read or listen to this, please keep the hanging ending to yourself.

Sinner Man is absurdly good for any writer’s first crime novel. Let’s get that out of the way up front. The story, to be succinct, involves a man who inadvertently kills his wife and runs, taking on a new personality and becoming a big deal in a criminal organization. The character work as the protagonist first attempts to redefine himself before ultimately becoming that new person is exceptional. The story itself is wholly engaging and the writing is solid (, and though in the afterward Block tells us that he reworked the beginning and Charles Ardai edited lines to correct bizarre editing practices by the original publisher, this never reads outside the lines of how we know Block to write). It moves briskly and wonderfully and was a joy to read.

I listened to the audiobook narrated by Mike Dennis, whose work is very good. His voice plays well with the material, and he falls into a rhythm that I found easy to spend hours listening to.

Gritty pulp fiction with a pulse

I thought I'd read just about all of Lawrence Block's crime novels, but this one slipped under my radar. I shouldn't be surprised, because according to this book's fascinating Afterword, the novel nearly eluded the author, too. Block had almost lost hope of unearthing a copy of this early crime tale, which was originally released under an alternate title and pen name by a rather disinterested publisher. Block himself never received a copy, and wasn't sure it had even come out. Fortunately, as chronicled in the Afterword, a copy was found, and the book is now available for your reading and listening pleasure.

And what an intriguing pleasure it is. Despite being written when Block was still cutting his teeth on detective tales, Sinner Man is bleak, gripping, and suspenseful. When an unlikable insurance salesman accidentally kills his wife, he flees to Buffalo and reinvents himself, almost overnight, into a powerful new player in the local crime scene. But how long can any secret stay hidden in a world that trades on those very things?

The most surprising thing about Sinner Man is its fully developed voice. Block creates a detestable but fascinating protagonist, then surrounds him with lowlifes who talk like disillusioned angels. You'll swear you can smell the cigarettes and stale perfume, interspersed with sex scenes that read like a wild blend of poetry and punishment. It's clear that the writing owes more than a little bit to Mickey Spillane, but Block doing Spillane isn't exactly my idea of a bad time.

Mike Dennis is the perfect narrator for the novel, reminding me of a particularly weary Mike Hammer. His voice conveys the disgust and jadedness of this world, while somehow soaring just above it, not making us feel trapped in it.

And as I mentioned above, the Afterword, conveying how the novel came to be rediscovered, is every bit as interesting as the rest of the book. Don't skip it.