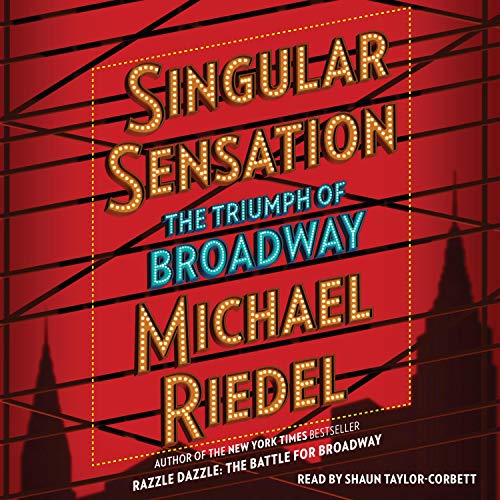 By: Michael Riedel
Narrated by: Shaun Taylor-Corbett
Try for £0.00

A “brisk, insightful, and deliciously detailed take” (Kirkus Reviews) on a transformative decade on Broadway, featuring behind-the-scenes accounts of shows such as Rent, Angels in America, Chicago, The Lion King, and The Producers — shows that changed the history of the American theater.

The 1990s was a decade of profound change on Broadway. At the dawn of the '90s, the British invasion of Broadway was in full swing, as musical spectacles like Les Miserables, Cats, and The Phantom of the Opera dominated the box office. But Andrew Lloyd Webber’s Sunset Boulevard soon spelled the end of this era and ushered in a new wave of American musicals, beginning with the ascendance of an unlikely show by a struggling writer who reimagined Puccini’s opera La Bohème as the smash Broadway show Rent. American musical comedy made its grand return, culminating in The Producers, while plays, always an endangered species on Broadway, staged a powerful comeback with Tony Kushner’s Angels in America. A different breed of producers rose up to challenge the grip theater owners had long held on Broadway, and corporations began to see how much money could be made from live theater.

And just as Broadway had clawed its way back into the mainstream of American popular culture, the September 11 attacks struck fear into the heart of Americans who thought Times Square might be the next target. But Broadway was back in business just two days later, buoyed by talented theater people intent on bringing New Yorkers together and supporting the economics of an injured city.

“Told with all the wit and style readers could wish for” (Booklist) Michael Riedel presents the drama behind every mega-hit or shocking flop. From the bitter feuds to the surprising collaborations, all the intrigue of a revolutionary era in the Theater District is packed into Singular Sensation. Broadway has triumphs and disasters, but the show always goes on.

What listeners say about Singular Sensation

Juicy Broadway History of the '90s

For lovers of theatre, Michael Riedel, the theatre columnist for the New York Post (think: a tabloid version of Addison DeWitt), crafts a history of Broadway in the '90s, post-heyday of the Big British Musical invasion of the late '80s - Riedel even begins with postmortems on the last of these productions, Miss Saigon and Sunset Boulevard, dissecting their casting controversies (the latter in multiple as Lord Lloyd-Weber tussles with Patti LuPone, Glenn Close AND Faye Dunaway). All the juicy details are here. Riedel continues with capsule histories of Angels In America and Rent, all the way through to The Lion King, the wild success of Mel Brooks' The Producers and everything in between. (For all the time spent with Julie Taymor's development of The Lion King musical, you wish he'd spent a little more time on the out sized debacle of her Spiderman musical - but that could be an entirely separate book).

The narrator clips along energetically enough (I recommend about 1.4x speed) mispronouncing names, cities and titles but all the juice is in the content - which if you love the theatre is more than enough. Some of the best details are early on (the Sunset Boulevard section is perhaps most noteworthy), while the section on Garth Drabinsky, the disgraced Canadian producer with creative accounting practices, probably seems a bit quaint when compared to the current normalised standards of corruption. Published in November 2020, Riedel states in the forward that given the devastating effects of the pandemic on Broadway (and arts organisations around the world), his intent is to remind readers that Broadway has seen tough times before and, given this and everything since, it is fitting that the book more or less ends with Broadway's spirited post-9/11 rallying for the recovery of New York City, when its then luminaries dug deep and swallowed the lumps in their throats to return to work in the week after the attack for the sake of the city, its economy and as a riposte to the terrorists. And even then, Riedel works in juicy details of the behaviour of one of Broadway's most treasured stars. A treat from start to finish.

Glorious and fascinating. I loved it. The reader is a little stilted but it didn’t matter - the different chapters focus on different shows or genres. It’s worth a read just for the Sunset Boulevard gossip...